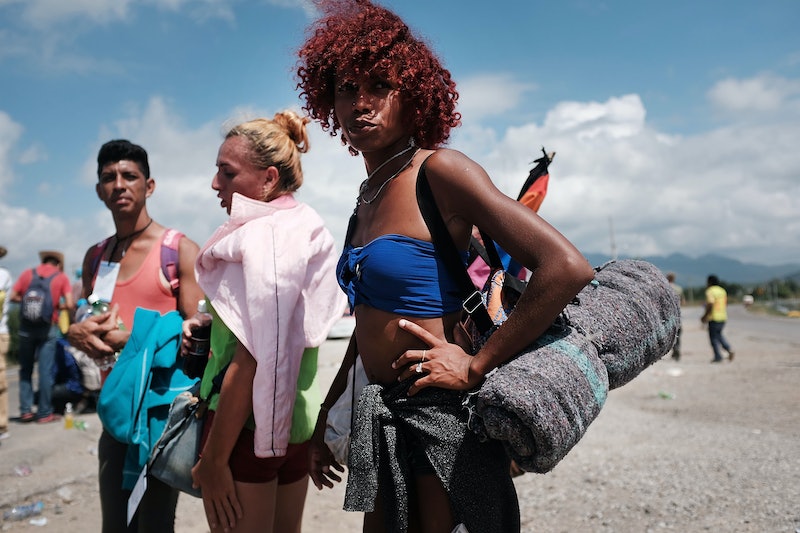 According to the Washington Post, a group of LGBTQ asylum seekers from the migrant caravan have reached the U.S. border from Central America, making them the first to do so. More than 5,000 migrants have joined the caravan to escape persecution in their home countries, according to USA Today, and although the bulk of them are still hundreds of miles away from the U.S., several dozen LGBTQ migrants arrived in Tijuana from Mexico City earlier in the week, the Post reports.

The caravan attracted thousands of Central Americans fleeing violence and persecution in their home country, including not only victims of gang and domestic violence but victims of LGBTQ discrimination, too. Although many Central American countries have moderately pro-LGBTQ laws on the books, the region has high rates of anti-LGBTQ violence, according to several studies cited by Amnesty International.

LGBTQ asylum-seekers in the caravan tell The Post that they faced harassment by their fellow migrants in the caravan during their 2,000-plus mile trek to the U.S. border.

“We were discriminated against, even in the caravan,” Erick Dubon, a 23-year-old, from San Pedro Sula, Honduras, told The Post. “People wouldn’t let us into trucks, they made us get in the back of the line for showers, they would call us ugly names.” According to NBC News, LGBTQ asylum-seekers in the caravan say they've been harassed and robbed by other migrants during their trip, and have banded together throughout the journey to protect themselves.

Although hard statistics on anti-LGBTQ violence in Central America are difficult to come by, the limited studies that do exist paint a dark picture. According to the Association for Communicating and Training Trans Women in El Salvador (COMCAVIS TRANS), there were 28 "serious attacks" — mostly murders — against LGBTQ people in El Salvador between January and September 2017. The Cattrachas Lesbian Network reports that 264 LGBTQ people were murdered in Honduras between 2009 and 2017. In Guatemala, 40 trans people were murdered in 2016, according to Transgender Europe.

NBC News reports that there are around 50 LGBTQ migrants in the caravan, ranging in age from 17 to 60. They say that, in addition to facing abuse by their fellow migrants, they've face steeper obstacles when catching rides from vehicles during the trek.

"A taxi driver kicked us out of his car," a 23-year-old Honduran told NBC News. She added that truck drivers who transport migrants for pay will sometimes double or triple their prices for LGBTQ migrants.

The migrant caravan received substantial attention from President Trump and other prominent conservatives in the lead-up to the midterms. Because of the manner in which they often framed the topic — Trump, for instance, spread unfounded rumors that the caravan included "unknown Middle Easterners" — many on the left accused conservatives of discussing the caravan primarily to rile up the Republican base ahead of the election. Notably, Trump has almost completely stopped talking about the caravan since the midterms.

The migrants themselves, meanwhile, are "almost universally unaware of the results" of the midterms, according to interviews by The New York Times.

“There was a rumor going around that Donald Trump had supposedly lost, but I don’t know if it’s true," one Honduran migrant told The Post. "I do know that there was an election."