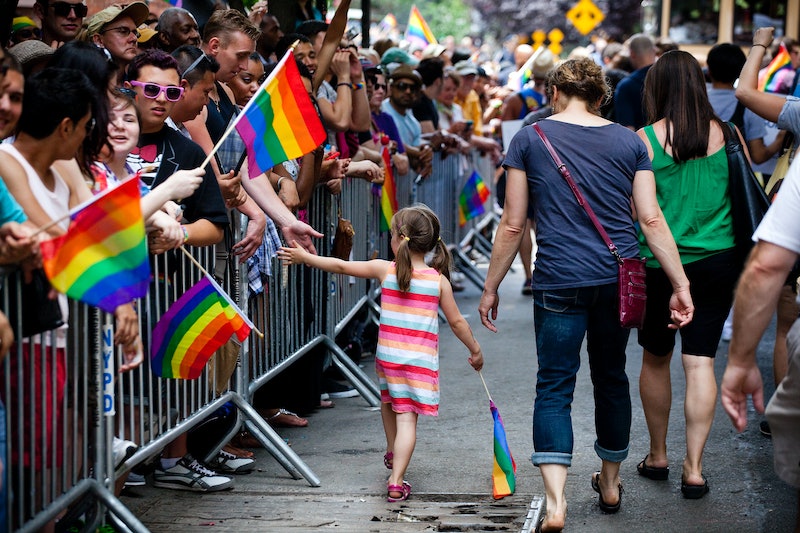 According to a new survey by the Family Equality Council, more LGBTQ millennials are becoming parents, Jezebel reports. Becoming parents wasn’t always an option for LGBTQ people because of public perception, public policy, and technological limitations, says Jezebel, but this new survey data shows that LGBTQ people now have more options when it comes to starting a family. That means the parenting gap between straight and LGBTQ people is finally starting to close, says Jezebel, though there’s still a way to go before totally equity is reached.

The LGBTQ Family Building Survey is the first of its kind because it covers a wider spectrum of the LGBTQ community, including people who are transgender, bisexual, and even single parents, USA Today reports. According to the Family Equality Council, after marriage equality became legal in 2015, becoming parents and growing a family seemed much more within reach for the LGBTQ community. And the survey results reflect that, with 63 percent of LGBTQ millennials (ages 18-35) saying they are thinking about becoming parents or having more children, and 48 percent of LGBTQ millennials actively growing their families. When you compare that to LGBTQ people ages 55 and older, only about 33 percent said they have children or are thinking about having children, according to the survey.

“For too many generations now, the dream of having children and forming a family was one that too many of us have felt we had to trade off in exchange for coming out of the closet,” Rev. Stan Sloan, CEO of the Family Equality Council, was quoted as saying in USA Today. “We see that for a generation of young LGBTQ people, this trade-off is no longer necessarily in place.”

And the methods for how LGBTQ people are starting families is also changing. According to the survey, 63 percent of LGBTQ millennials are planning on using reproductive technology, foster care, or adoption to become parents. That’s a significant change from past generations of LGBTQ people, who the Family Equality Council says primarily conceived through intercourse. That’s because so much has changed even in the last 10 years, says the Family Equality Council.

“Family-building options for the LGBTQ community looked very different 10 years ago, and even more dramatically so 20 and 30 years ago,” the Family Equality Council said in its report. “There were significantly fewer options for those in the LGBTQ community pursuing foster care and adoption, fewer safeguards for securing legal parentage of biologically-conceived children, and a lack of parenting resources for the community as a whole. A decade ago, a majority of Americans still opposed same-sex marriage, let alone equality that extended into the realms of parental rights for all members of the LGBTQ community.”

It’s encouraging to see more LGBTQ families grow as public perception and policy catches up to the world around it. Having a family is such a deeply personal choice — one that everyone should have regardless of their sexual orientation.