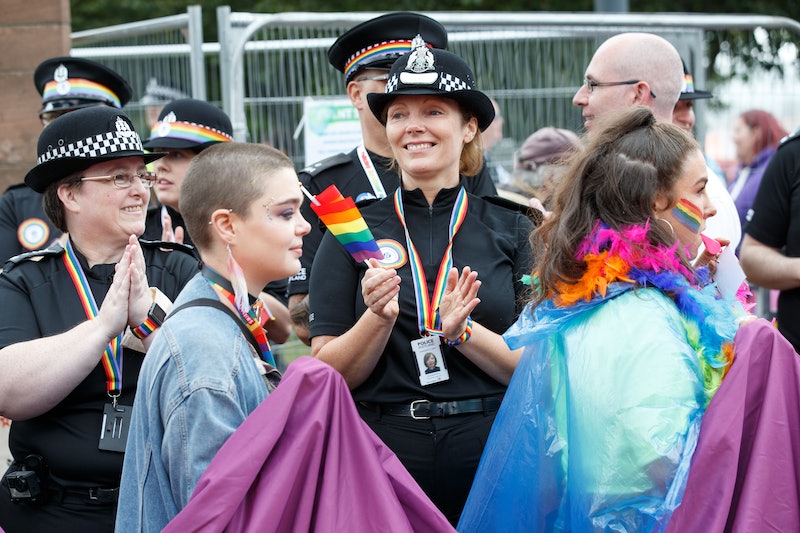 A new report published by the Harvard T.H. Chan School Of Public Health has revealed that LGBTQ Americans, and particularly LGBTQ people of color, say they experience more police discrimination than non-LGBTQ people, and can go out of their way to avoid dealing with them, at a cost to their own safety and health. The study, co-produced by NPR and the public health research organization The Robert Wood Johnson Foundation, did extensive telephone interviews with 3,453 Americans over four months starting in January 2017, and looked at the answers of the 489 people who identified as LGBTQ. It's important to note here that this group was "nationally representative," racially — it had 61 percent white respondents and 39 percent people of color — but that there weren't enough people in each non-white ethnic or racial category to make specific observations about each.

15 percent of all LGBTQ people said they'd avoided calling the police when they were in need, because they were worried they'd be discriminated against. 26 percent said they or a family member or friend who is also LGBTQ had been "unfairly stopped or treated" by the police because of their sexual identity. When asked if they ever avoided doing things like "using a car or public transportation" or "participating in political or social events" because they wanted to avoid interacting with the police, 21 percent of the respondents said yes. And they also reported seeing issues in their local communities; 25 percent said they knew LGB people experienced discrimination when interacting with the police in their local areas, and 32 percent said they were aware of local transgender people suffering in police interactions. The sample of transgender respondents was too small for this study to get a representative look at their responses, the authors said.

The consequences of this sort of relationship between police and the LGBTQ community can have high stakes. In Australia this year, police have re-opened investigations into 88 murders in the period between the 1970s and 1990s, which are now believed to have been conducted by gangs targeting gay men. At the time, police indifference and homophobia meant that the murders went unpunished. The Stonewall Organization, in a published set of guidelines for police on how to deal with LGBTQ issues, contains quotes from LGBTQ people about police "not being interested" when homophobic attacks were reported and that police "failed to deal" with domestic violence complaints in LGBTQ relationships.

A report by the Williams Institute on the problem of police discrimination against LGBTQ people in 2015 has a few ideas on what can be done to change things. The problem undermines effective policing, it explains, because it weakens trust in the community, creates underreporting and means the police aren't doing their job properly. So what can be done? It suggests that police departments need to have explicit anti-LGBTQ discrimination statutes on their books, from the local to the federal level, make funding conditional on how well they do in meeting those statutes, and train everybody on how to police the LGBTQ community effectively and sensitively. Unfortunately, as the current White House administration has attempted to ban transgender people from the military, among other anti-LGBTQ policy moves, a push for LGBTQ-inclusive police training does not seem likely to come from the federal level in the immediate future.

More like this
10 Times Boris Johnson Got It Wrong On Trans Rights
By El Hunt and Sam Ramsden
The UK's First LGBTQ+ Museum Is Finally Opening
By Sam Ramsden
Target Dropped *Two* New Fashion Collabs With Queer-Owned Brands
By Dominique Norman
How To Fight For Reproductive Rights, Based On How Much Time You Have
By Courtney Young
Get Even More From Bustle — Sign Up For The Newsletter