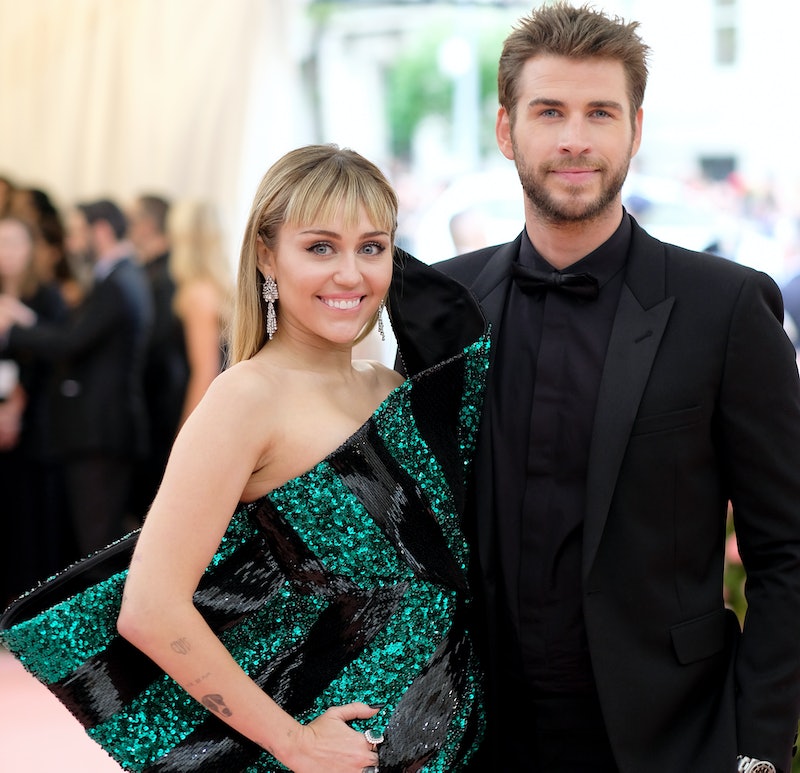 This couple was known for being private, and they want to keep it that way even after recently separating. As reported on Monday, Liam Hemsworth addressed his split with Miley Cyrus very briefly, according to E! News, and his comment is pretty heartbreaking. Hemsworth — who is currently in Byron Bay, Australia — was approached by the Daily Mail Australia following a workout with brother Chris Hemsworth. The publication asked the star about his separation, and it's not a topic he seemed interested in discussing.

UPDATE, Aug. 13: Early on Tuesday morning, Hemsworth posted an Instagram clearing the air about his split. In the post, the actor claimed there were false quotes circulating, seemingly referencing those from The Daily Mail, which spread on the internet Monday. While Hemsworth still asked for privacy, he made clear that fans should not believe everything they read. He wrote:

"Hi all Just a quick note to say that Miley and I have recently separated and I wish her nothing but health and happiness going forward. This is a private matter and I have not made, nor will I be making, any comments to any journalists or media outlets. Any reported quotes attributed to me are false. Peace and Love."

EARLIER: "You don't understand what it's like," Hemsworth told the Daily Mail. "I don't want to talk about it, mate." Considering the news just broke this weekend, it makes sense that he wants to keep those feelings to himself. Rumors that the pair broke up began after Cyrus posted a vacation photo on Instagram in which she doesn't appear to be wearing a wedding ring. Then on Saturday, the couple confirmed the split, with Cyrus' representatives issuing a statement to People, which read:

The couple had been married for nearly 8 months. In December of 2018, Hemsworth and Cyrus wed in a private ceremony in Nashville, according to Harper's Bazaar. Hemsworth and Cyrus are both animals lovers, and shared seven dogs, two mini-horses, two horses, two pigs, and three cats, as reported by InStyle. The stars promised the pets would not go neglected following the split.

As fans know, Hemsworth and Cyrus first met and began on the set of Last Song in 2009, so their love story goes way back. The two had an on-again, off-again relationship, but were first engaged in 2012, as per People. Cyrus and Hemsworth called off the engagement a year later, but reconciled in 2015. In November of 2018, Hemsworth and Cyrus' Malibu home burned down in the Woolsey Fire, according to CNN. The tragedy brought the couple closer.

In July, Cyrus discussed her marriage in an interview with Vanity Fair, and the role the fire had in bringing the couple together. She said:

"When you experience what we experienced together with someone, it is like glue. You’re the only two people in the world who can understand.”

Also in July, Hemsworth talked about the fire in an interview with GQ Australia as well, emphasizing that the loss contributed to the couple's decision to get married. “Then just going through something this emotional with someone, it brings you closer and we felt like we’d lost a big part of our lives, so we wanted to make a new part of our lives," he said. "It was something really good coming out of a horrible situation. It was going to happen eventually, but I think this just sped it up a little bit."

This couple has been through a lot together and they know each other better than anyone. It's not yet clear what exactly led them to split, but Hemsworth's comment indicates the couple isn't ready to open up to fans and that's perfectly fine. Given that the actor is spending time with family in Australia, while Cyrus is abroad in Italy, it seems like taking time for themselves will be what's best for now.