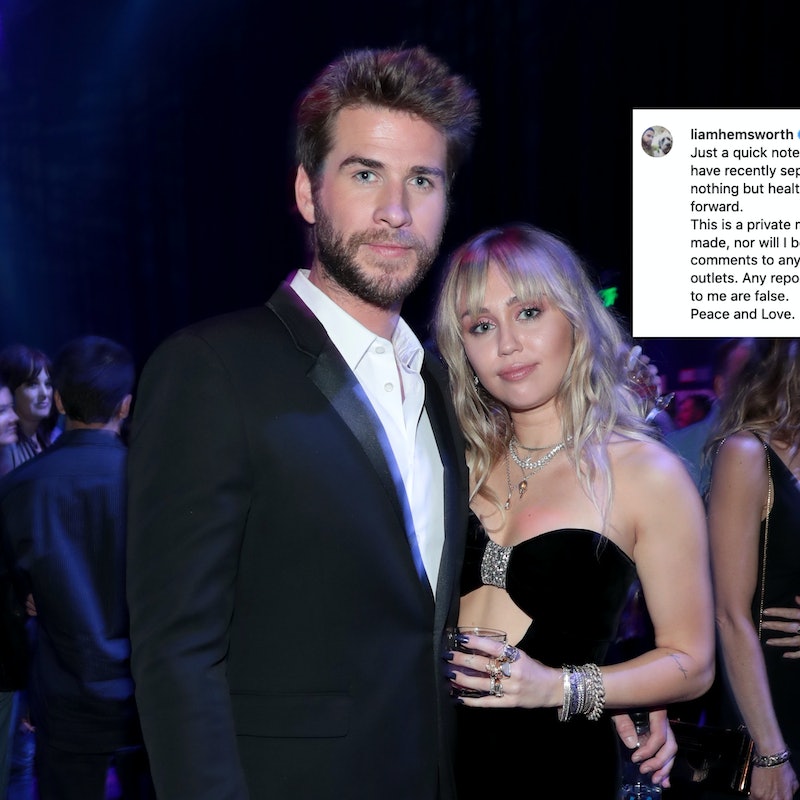 Days after the news broke that Miley Cyrus and Liam Hemsworth are separating, the Hunger Games star is letting fans know that they shouldn't believe everything they read. In his first Instagram post since the split, Hemsworth addressed quotes about his breakup that are going around, and apparently, those quotes were totally false.

Earlier this week, The Daily Mail Australia claimed that they caught up with Hemsworth and his brother, Chris, while working out in Byron Bay. When asked about the breakup, Hemsworth reortedly replied, "You don't understand what it's like, mate. I don't want to talk about it, mate."

But now, it seems that Hemsworth didn't actually talk to the outlet, and according to his Instagram post, he hasn't given a comment to any outlet at all — and at this point, he doesn't plan to in the future, either.

Alongside a photo of a sunset, Hemsworth wrote:

Hi all. Just a quick note to say that Miley and I have recently separated and I wish her nothing but health and happiness going forward. This is a private matter and I have not made, nor will I be making, any comments to any journalists or media outlets. Any reported quotes attributed to me are false. Peace and Love.

Although fans are certainly curious about what happened behind the scenes to make Cyrus and Hemsworth go their separate ways after less than a year of marriage, it seems like he's just looking for privacy for now. It makes sense — the end of a marriage is never easy, especially for people who have been together as long as this couple has. It's possible the full story will come out eventually, but right now, Hemsworth just wants his space.

Cyrus and Hemsworth first announced their separation on Saturday in a statement they made via Cyrus' rep to People.

"Liam and Miley have agreed to separate at this time," their statement said. "Ever-evolving, changing as partners and individuals, they have decided this is what’s best while they both focus on themselves and careers. They still remain dedicated parents to all of their animals they share while lovingly taking this time apart. Please respect their process and privacy."

As for Cyrus, she herself hasn't commented about the split publicly, but she did share her first Instagram post on Sunday. She didn't reference Hemsworth directly, but she did mention that she is trusting her own "process."

"My dad always told me 'Nature never hurries but it is always on time'... it fills my heart with peace and hope KNOWING that is true," she wrote. "I was taught to respect the planet and its process and I am committed to doing the same with my own."

It's always a bummer when a celebrity couple decides to split, but it seems like Cyrus and Hemsworth are making the best decision for themselves right now. Hopefully, they will both be able to move on and have the privacy they're asking for during this difficult time.