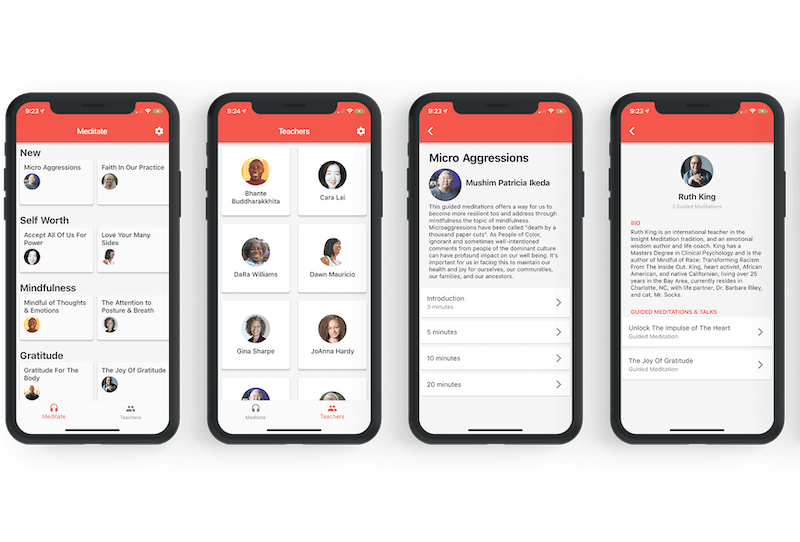 There is an abundance of meditations apps to choose from on the market, but few (if any) address the very real consequences that racism can have on people of color. A recently launched app wants to change that. Liberate Meditation is a new wellness app designed specifically for communities of color. It has meditations addressing everything from healing from microaggressions, to reconnecting with heritage.

The app, founded by Julio Rivera, was launched in May 2019. While dealing with a particular difficult period of anxiety and stress in November 2017, Rivera began searching for meditation spaces around New York. “In the hunt, I found a sangha (or Buddhist community) dedicated only for people of color within a meditation center named New York Insight Meditation Center,” Rivera tells Bustle via email, adding that as an Afro-Latino person, meditating in a person of color-only space was life-changing.

“This was very different from my previous experiences meditating in predominantly white communities,” he explains. “I left every night feeling connected with others, empowered to keep meditating everyday, and hope that I could thrive in the midst of this dark period.”

However, after scheduling conflicts prevented Rivera from continuing to attend in-person classes at the center, he sought out online meditation resources specifically made with people of color in mind to cope with his ongoing anxiety. However, much to his disappointment, he found none. “When I talked to other folks, they also [...] were struggling to find resources,” Rivera says. This inspired him to create Liberate Meditation, using his background in software engineering and mobile development.

“I wanted to have some of my favorite meditation teachers always accessible when I was dealing with a challenge,” he says. “I reached out to a few meditation teachers who agreed to be apart of the app initially. Since then, it has grown so much from the support of the community.”

There are over 30 meditation teachers featured on Liberate Meditation, and the sessions last anywhere from five to 20 minutes so they can fit into anyone’s schedule. Furthermore, the app is free to download and sign up for.

What sets Liberate Meditation apart from other meditation apps are the series of meditations directly geared towards mitigating the impact that racism has on the health of people of color. Research has shown that racism and systemic discrimination can lead to health disparities among people of color. A 2019 study found that racism increases Black peoples’ risk of developing a chronic illness by triggering an inflammatory response. (It’s important to note that studies published as recently as May 2019 have shown depression is also linked to inflammation.) Moreover, a 2016 review of studies published in the American Journal of Public Health revealed that Afro-Latinx people who’ve experienced racial discrimination reported more physical and mental health issues than white Latinx people.

“We’ve been conditioned from messages throughout society and trauma carried throughout generations that we are ‘not enough,’ and we are ‘not worthy.’ [...] We have a very difficult time loving who we are, and we [sometimes] fight and separate ourselves from our own people,” Rivera says, adding that because of this, many of the sessions focus on cultivating self-worth, and self-compassion.

Some of the meditation themes unique to people of color on Liberate Meditation include coping with microaggressions (Rivera recommends teacher Mushim Patricia Ikeda’s session, “Micro Aggressions”), reconnecting to lost lineage and ancestors, and an informative talk on how the Black Lives Matter movement is connected to meditation. Additionally, Rivera says that there are “meditations on cultivating gratitude and confidence towards the body” that are also geared towards the experiences of communities of color.

“I see Liberate as a catalyst for our community to do this inner work of healing so that we can move through this world loving ourselves and restore love with other members of the [Black, Indigenous, and people of color] community,” Rivera says. “By building deeper relationships with each other, there are more opportunities to cultivate safer spaces for us to heal.”

Creating the app is just beginning for Rivera and the rest of the team, who want to organize an in-person meditation retreat by the end of 2020. Having spaces dedicated to the wellness of communities of color — both in-person and online — is essential. When dealing with racial discrimination and microagressions, Liberate Meditation can be a powerful tool for healing and connection.