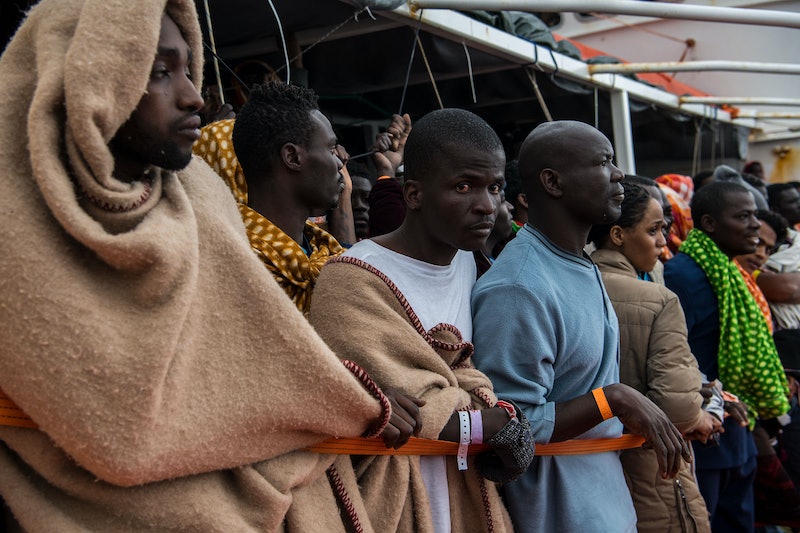 An undercover CNN investigation in November revealed that refugees in Libya are regularly being sold as slaves, prompting global condemnation and outrage. As the international community scrambles to address what French President Emmanuel Macron describes as a "crime against humanity", the episode is a crucial reminder that as upsetting as modern-day slavery is, it's not rare — at all.

As of 2016, there were an estimated 45 million human beings around the world living in slavery, according to the Global Slavery Index. To put that number into perspective, that's more than triple the total number of Africans who were kidnapped and shipped to the West as slaves between 1525 and 1866, and over 10 times the number of slaves in the United States as of 1860, according to Harvard professor Henry Louis Gates.

Even more alarmingly, the Global Slavery Index found that slavery, in some form or another, currently exists in 167 countries. That's about 85 percent of all countries.* According to the organization's most recent report, the countries with the highest proportion of slaves relative to their populations are North Korea, Uzbekistan, Cambodia, India, and Qatar; from a raw numbers standpoint, the countries with the most slaves are India, China, Pakistan, Bangladesh, and Uzbekistan.

Slavery, in other words, is still a widespread problem in the 21st century. It's not confined to Libya, or any other one region of the world. Even the United States, which ostensibly abolished slavery over 100 years ago, is still home to around 57,000 slaves as of 2016, according to the Global Slavery Index.

That said, the undercover footage from Libya that CNN filmed is still horrifying in its own right. Libya's Government of National Accord — one of two entities in Libya that claims to be the country's legitimate governing body — condemned the slave auctions after they became public, and launched an investigation. However, it also said that it can't fully address the problem unless the international community does more to address the growing number of refugees worldwide.

The GNA released a statement on the matter:

Libya is a transit country for large and continuous flows of illegal immigrants. It is going through difficult times which affected its own citizens as well. It is, therefore, not fair to assume responsibility for the consequences of this immigration, which everyone unanimously agreed that addressing this phenomenon exceeds the national capacities. Therefore, we affirm again that the practical solution is to address the real reasons that drive people to leave their home countries, treat them and develop final solutions for them.

But while that may sound like passing the buck, the GNA actually has a point: By all outside indications, the Libyan government is unequipped to address the preponderance of slave auctions. That's because the country, including the government, is in a state of chaos, and has been for quite some time.

In 2011, NATO forces bombed Libya in an ultimately-successful attempt to topple then-President Muammar Gaddafi. Since then, however, the country has steadily descended into near-anarchy. ISIS infiltrated Libya in 2014 and now has a robust presence in the country, domestic militias are almost too numerous to count, and the elected government is constantly under assault by extremists of all stripes. As previously mentioned, there is no universally recognized governing body in the country.

It is also worth mentioning that there are currently an estimated 22 million refugees worldwide, around 700,000 of whom are in Libya — the fact that so many refugees exist is, of course, not Libya's fault.

Thankfully, some countries have taken action since the slave auction videos were published. Rwanda, for instance, has pledged to take in 30,000 refugees currently in Libya. Still, as distressing as Libya's slave auctions are, they're unfortunately just one very small part of a much larger problem.

*There are around 195 countries on Earth; there's no consensus on that number, however, because some places that claim to be independent countries, such as Taiwan, are not universally recognized as such.

More like this
6 Organizations Fighting Police Brutality That You Can Support Right Now
By Syeda Khaula Saad and JR Thorpe
Watch Jacinda Arden’s Devastatingly Honest Resignation Speech
By Sam Ramsden
The UK Government Is *Finally* Banning Conversion Therapy
By Sophie McEvoy
Here’s Where The NHS Nurses’ Strike Currently Stands
By Sophie McEvoy
Get Even More From Bustle — Sign Up For The Newsletter
From hair trends to relationship advice, our daily newsletter has everything you need to sound like a person who’s on TikTok, even if you aren’t.