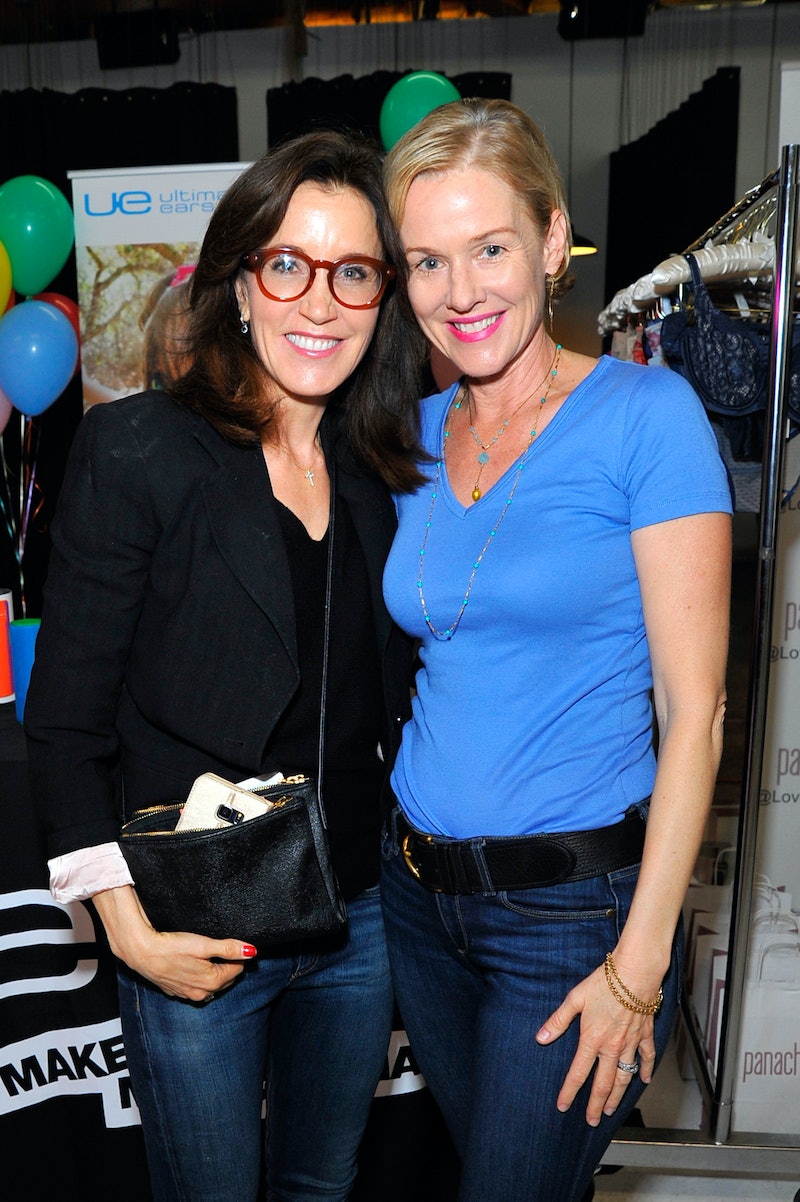 There's no scandal quite like a college scandal, and Lifetime is grabbing a piece of the pie. Lifetime is creating a movie inspired by the college admissions scandal that stormed the nation, or as federal investigators dubbed it, Operation Varsity Blues. And Lifetime's College Admissions Scandal movie just announced its cast, and fans will be surprised to ind out that one actor in particular has a surprising connection to Felicity Huffman, one of the high profile actors involved in the case.

Penelope Ann Miller and Mia Kirshner are set as the leads in The College Admissions Scandal, as reported by Deadline on Monday, Aug. 12. Michael Shanks will portray Rick Singer, the founder of a college prep business that over 40 people, including Huffman, Lori Loughlin, and Loughlin's designer husband Mossimo Giannulli, allegedly used in order to bribe and cheat their children's ways into prestigious universities across the country.

In an ironic twist, Miller appeared alongside Huffman in the first season of ABC's hit series American Crime, starring as Eve Carlin, the mother of a home invasion robbery victim. But despite working with Huffman, Miller will not be playing her onscreen. In fact, the film won't focus on Huffman, Loughlin, or any of the notable indictees of the case, save for Singer, the ringleader of it all.

Instead, The College Admissions Scandal will center on two wealthy mothers, Caroline (Miller), a popular interior designer, and Bethany (Kirshner), the owner of a highly successful financial services firm. Both ladies are set on getting their teenage children into the best universities and will accept nothing less. The official film synopsis, as reported by Deadline, reads in part:

"When charismatic college admissions consultant Rick Singer (Shanks) offers a side door into the prestigious institutions of their dreams, Caroline and Bethany willingly partake with visions of coveted acceptance letters in their heads. But when Singer cooperates with the FBI and pleads guilty, the mothers who risked everything for their kids, must face the consequences of their crimes and the loss of trust and respect from their families."

The actual college admissions scandal, which broke out in April 2019, saw over 50 people get arrested and charged with various crimes, including paying bribes to college coaches and administrators, and facilitating cheating on the SAT and ACT for higher test scores, all for the purpose of getting their children into elite universities, including Yale, Stanford, and the University of Southern California.

Production on The College Admissions Scandal will begin this month, and it will hit our screens sooner than you think. The film will debut this fall, as part of Lifetime's Ripped From the Headlines movie series. Someone grab the popcorn — and maybe that letterman jacket from the back of your closet.