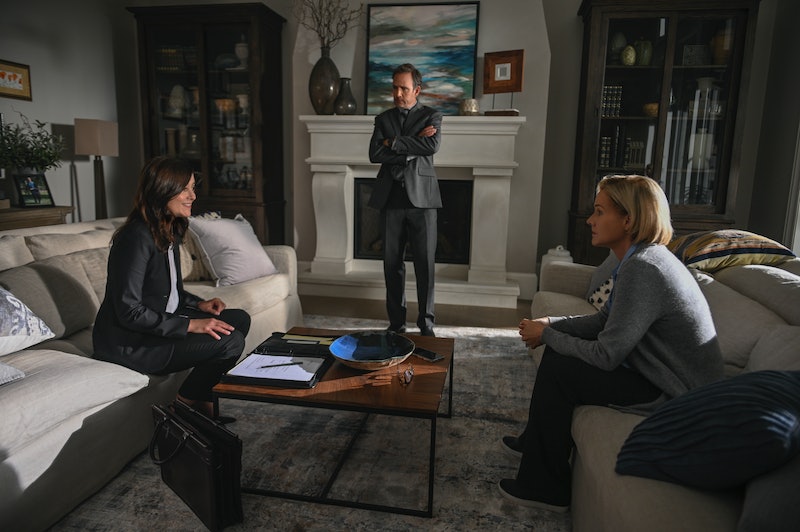 The first look at the TV movie inspired by the scandal that rocked Hollywood and higher education is here. Lifetime's College Admissions Scandal trailer previews the film that dramatizes the scandal surrounding parents allegedly bribing their children's way into elite universities. The movie, which premieres on Oct. 12, doesn't feature Lori Loughlin or Felicity Huffman, who are two major Hollywood figures among those facing allegations in the scandal, but the Lifetime film focuses on characters who are clearly inspired by them.

The trailer starts off with flashes of text saying just that — the movie is "inspired by true events." It then chronicles the tale of two wealthy mothers, Caroline (Penelope Ann Miller) and Bethany (Mia Kirshner), as they become embroiled in illegal means to get their children into top colleges with help from a college admissions consultant. While the movie does not reference Loughlin and Huffman's names, however, the film's consultant takes on the persona of the real-life mastermind behind the scam, Rick Singer (Michael Shanks).

"When charismatic college admissions consultant Rick Singer offers a side door into the prestigious institutions of their dreams, Caroline and Bethany willingly partake with visions of coveted acceptance letters in their heads," the official press synopsis for College Admissions Scandal reads. "But when Singer cooperates with the FBI and pleads guilty, the mothers who risked everything for their kids, must face the consequences of their crimes and the loss of trust and respect from their families."

In the tense trailer, viewers are immersed into the elite, privileged worlds of Caroline and Bethany. Exam results are falsified, fraudulent recruit photoshoots are organized, and money is laundered. Like all charades, however, it all comes crashing down. "Two desperate mothers," the trailer ominously narrates, "involved in a nationwide scandal." The clip concludes with the erosion of Caroline and Bethany's respective families as the truth comes to a head.

Directed by Adam Salky, College Admissions Scandal comes on the heels of the college admissions bribery scandal made public in March. Lifetime first announced plans to dramatize the investigation, coined Operation Varsity Blues, in July. More so, Lifetime isn't the only network bringing the story to the small screen: Annapurna TV is also developing a miniseries about the scandal based on a forthcoming book, titled Accepted, by Wall Street Journal reporters Melissa Korn and Jen Levitz. D.V. DeVincentis, the Emmy-winning writer and producer behind The People v. O.J. Simpson and High Fidelity, is attached to the limited series.

Ironically, Lifetime’s College Admissions Scandal also has a connection to one of the scandal’s real-life key players. Miller, who will depict Caroline in the TV movie, once starred opposite Huffman in the ABC drama American Crime, as per Town & Country. All things truly do come full circle, don't they? College Admissions Scandal is part of Lifetime's Ripped from the Headlines lineup, which will also explore three other real-life events: NXIVM Cult: A Mother’s Fight to Save Her Daughter, Abducted: The Mary Stauffer Story, and Trapped: The Alex Cooper Story.

College Admissions Scandal premieres on Lifetime on Saturday, Oct. 12. For revelers who simply cannot get enough of the bribery scandal, attendance is definitely mandatory.

More like this
Here’s Everything Coming To & Leaving Netflix In July
By Grace Wehniainen
What’s New On Netflix: The Return Of 'The Umbrella Academy'
By Arya Roshanian
Here's How To Stream 'Downton Abbey: A New Era' & The New 'Downton' Channel
By Alice Broster and Sam Ramsden
What’s New On Netflix: J.Lo’s Documentary & A Melissa McCarthy Series
By Arya Roshanian
Get Even More From Bustle — Sign Up For The Newsletter