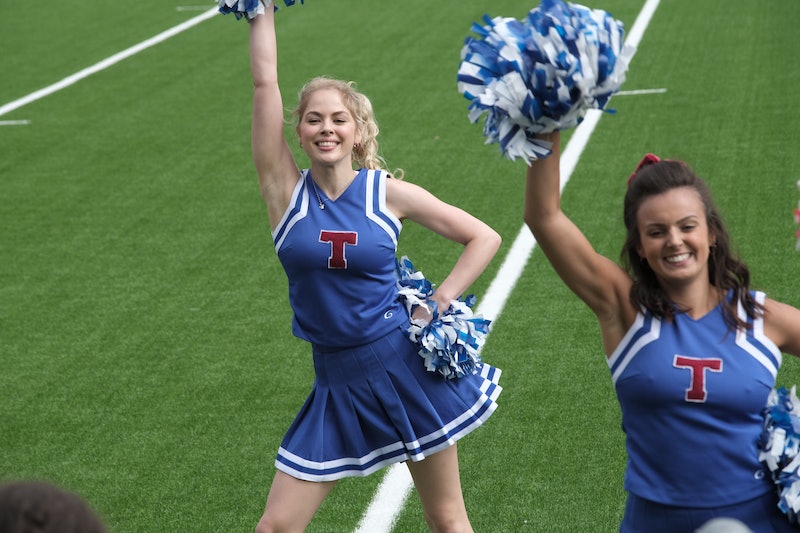 Lifetime’s upcoming TV movie will document the details surrounding a real-life murder. Sadly, Death of a Cheerleader is based on a true story and dramatizes the murder of Kirsten Costas, who was murdered by a classmate, according to the Los Angeles Times. The upcoming movie is actually a remake of 1994’s A Friend to Die For starring Tori Spelling and Kellie Martin as fictional versions of Kirsten and Bernadette, respectively. In Lifetime’s updated version, Sarah Dugdale stars as Kelly Locke, a beautiful and rich Northern California teen who is at the top of the social ladder. Meanwhile, Bridget is a shy outsider who aspires to be a part of Kelly's seemingly perfect world. She tries to form a friendship with the “IT” girl, but it is to no avail.

Kelly’s rejection eventually leads Bridget down a dark path of revenge that culminates in a deadly confrontation. Interestingly, Kellie Martin returns to portray an FBI agent who investigates the young woman's murder. Lifetime’s disturbing Death of a Cheerleader sneak peek shows just how terrifying an obsession can get. Bridget admits to Kelly that she really wants to be her friend in hopes of gaining more love from their peers. Kelly calls her out for wanting to use her for popularity instead of actually being her friend, but Bridget insists that’s not the case. She attempts to make Kelly feel sorry for her by pointing out that she wasn’t born rich and pretty, but this only makes Kelly angry because she believes Bridget just wants to have her life. The clip ends with Kelly running from Bridget’s car on a dark street.

Most of the reports about this case are in archived newspapers, but there is just enough information online to piece together this tragic incident. In reality, Kirsten Costas was the 15-year-old daughter of wealthy parents and a popular cheerleader at Miramonte High School in Orinda, California, per People. She was reportedly admired by many of her peers because she seemed to have it all — good looks, a fun personality, and a solid social status.

The 16-year-old Bernadette Protti unsuccessfully tried out for the cheerleading squad and told People that Kirsten would say things that made her feel "bad," even though she was never downright cruel. Bernadette tried to form a friendship with Kirsten, but when it didn't work, she devised a plan to bring them closer together. The report continues to document the events leading up to the June 23, 1984 murder with a mysterious phone call. Kirsten’s mother took a message for her daughter on June 21 about a secret Saturday night initiation dinner for the Bob-o-links, a sorority type of group at their school.

Kirsten reportedly became upset when she realized Bernadette came up with the dinner as a ploy to bring them together. An argument reportedly ensued and Kirsten fled to the nearby home of Alex and Mary Jane Arnold in hopes of contacting her parents. She reportedly told the couple that her friend had started being “weird” and accepted a ride home from Alex.

Bernadette followed the car and allegedly attacked Kirsten as she walked towards her door. Alex reportedly thought they had gotten into a fist fight, but Kirsten had actually been stabbed several times and died soon after arriving at a nearby hospital. Bernadette wrote a confession letter to her mother nearly six months later and was found guilty of second-degree murder. In April 1985, she was sentenced to a maximum of nine years in a youth facility. An Inquisitr report alleges that Bernadette was released in 1992, moved to another state, changed her name, and started a quiet new life. The Costas family reportedly moved to Hawaii and has remained quiet every since.

Of course, neither family has commented about the upcoming Lifetime movie but it will surely stir up feelings among those who were connected to these people IRL. You can watch Death of a Cheerleader on Feb. 2 at 8 p.m. ET.