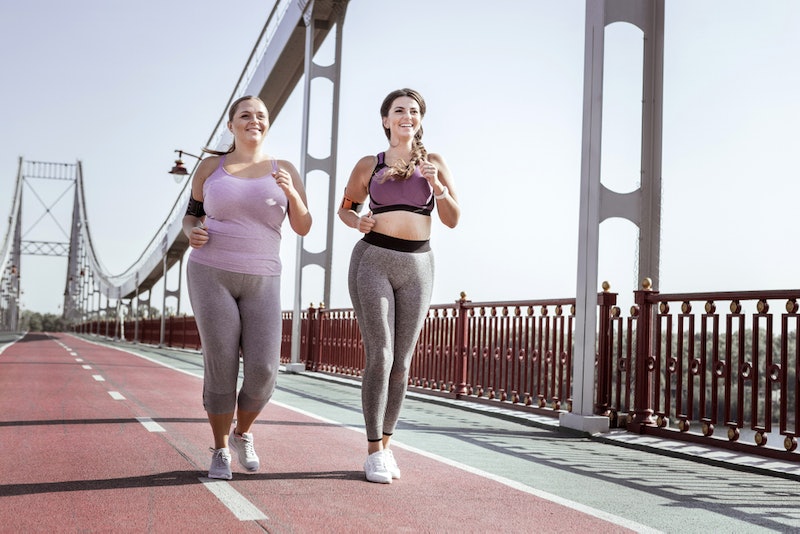 I know a lot of people who say the only way they'll run is if they're being chased. Well my friendlies, as it turns out, a little bit of running has a lot of health benefits. In fact, running once a week could help you live longer, according to a November 2019 study published in the British Journal of Sports Medicine. But if running isn't your thing, don't worry — it's not the only type of cardio that comes with health benefits.

Previous studies have found that walking, especially walking fast, has myriad physical and cognitive health benefits. So if walking is good and fast walking is best, it makes sense that turning your stride into a full-on trot can help you stay strong and healthy, which in turn can help you live longer. But is one form of cardio really better than another when it comes to extending your life?

Cards on the table, I am a very fast walker, but I don't love running. In general, the only running I do is running through the airport to catch a connecting flight that always seems to be at a gate located two miles away from the one where I landed. Same? If running is not your jam, or you're not physically able to run, it's best to take data like this with a grain of salt. If you don't take up running as a hobby tomorrow, there's no evidence to suggest you'll live a shorter life than someone who does.

In the press release, researchers noted that they couldn't establish any specific reason running increases longevity. In addition, the number of studies analyzed to arrive at this conclusion was small, and each study was different, which could have influenced the results.

A 2013 study published in the journal Arteriosclerosis, Thrombosis, and Vascular Biology found that it's about the amount of energy expended versus the type of activity that informs the outcome. According to that study, it doesn't matter how you get from point A to point B as long as getting there involves cardio. If you follow this line of reasoning, swimming, jumping, skipping, galloping, hiking, prancing, dancing, or cycling could all provide the same health benefits as running.

"The more the runners ran and the walkers walked, the better off they were in health benefits. If the amount of energy expended was the same between the two groups, then the health benefits were comparable," Dr. Paul T. Williams, Ph.D., lead author of the study and staff scientist at Lawrence Berkeley National Laboratory, Life Science Division in Berkeley, Calif., said in a press release.

Dr. Williams noted that runners can expend twice as much energy as walkers in the same amount of time. However, that doesn't mean walking isn't just as good as running. It just takes longer to get the same result. And if the result you're after is a longer life, then pick what works best for you because anything is better than nothing.

If you have specific workout goals aside from longevity, different cardio workouts provide different benefits and yield different physical results. If you want to take up running, Couch to 5k has a great guide to help you get started. You could also just pretend you're running to catch a flight.