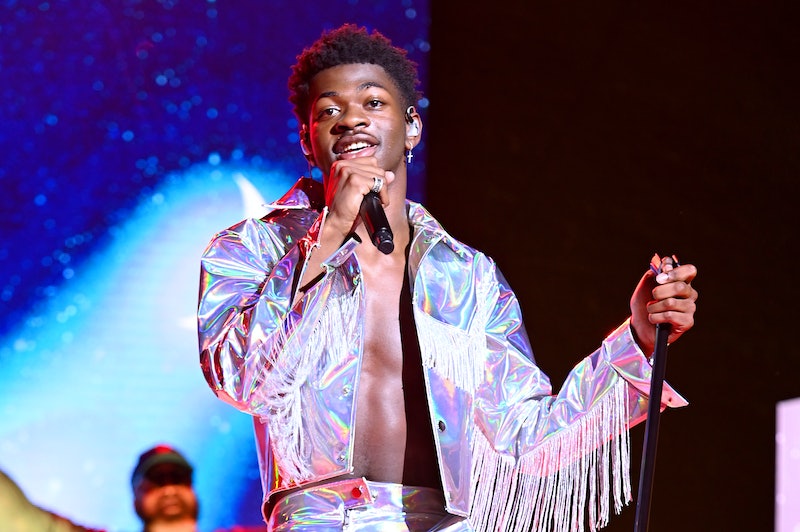 Lil Nas X is on a roll. "Old Town Road," his viral hit with Billy Ray Cyrus that made the entire world put on their cowboy hats and yee-haw, just hit a historic 19th week at number one on the Billboard Hot 100. And he's on the cover of TIME, a rare feat for such a new, young artist. He opened up about nearly everything in the new cover story, including his sexuality. Lil Nas X revealed why he came out as gay, and it might just bring a tear to your eye.

The rapper told TIME that he initially didn't plan to come out at all, even to his own family, for many reasons, including the fact that he was taught at a young age that homosexuality “is never going to be OK" Despite hip-hop artists like Frank Ocean and Kevin Abstract of BROCKHAMPTON coming out as queer, the hip-hop world is still disappointingly rampant with homophobia (just last year, Eminem used a homophobic slur in a song without much backlash), and he was afraid of losing the same fans he had just gained. “I know the people who listen to this the most, and they’re not accepting of homosexuality,” he said.

Lil Nas X said that experiencing Pride Month, and seeing queer couples be their authentic selves everywhere he looked, changed something in him. On June 30, the final day of Pride Month (even though Pride should be celebrated every day, all year 'round), he came out publicly in the only way he could: through a series of very casual Tweets. "Dead*ss thought i made it obvious," he wrote, pointing to a rainbow building on the cover of his 7 EP.

“I never would have done that if I wasn’t in a way pushed by the universe,” he said of his public coming out. “In June, I’m seeing Pride flags everywhere and seeing couples holding hands–little stuff like that.” He also revealed to the outlet that he came out to his father and sister earlier in June. Now, he's even more casual about his sexuality, sometimes using it as a punchline in his self-deprecating Twitter humor. "Wow man last year i was sleeping on my sisters floor, had no money, struggling to get plays on my music, suffering from daily headaches," he posted on July 28. "now i’m gay."

Elsewhere in his TIME cover story, the musician also opened up about his new position as a young black queer man in America that has received unprecedented amounts of success in the entertainment industry. “Everything lined up for this moment to take me to this place,” he said. “Not to sound self-centered, but it feels like I’m chosen, in a way, to do this stuff.” But he also said the pressures of living up to his success can get to be too much. “It gets overwhelming,” he said. “I just shut down on everybody — I’m still a loner in a lot of ways.”

TIME also revealed what's next for Lil Nas X. The rapper is working with much bigger producers now, including Pharrell Williams, and plans to release more songs soon that experiment with the genre-bending that made "Old Town Road" a monumental hit. Put on your cowboy boots and get ready to dance.