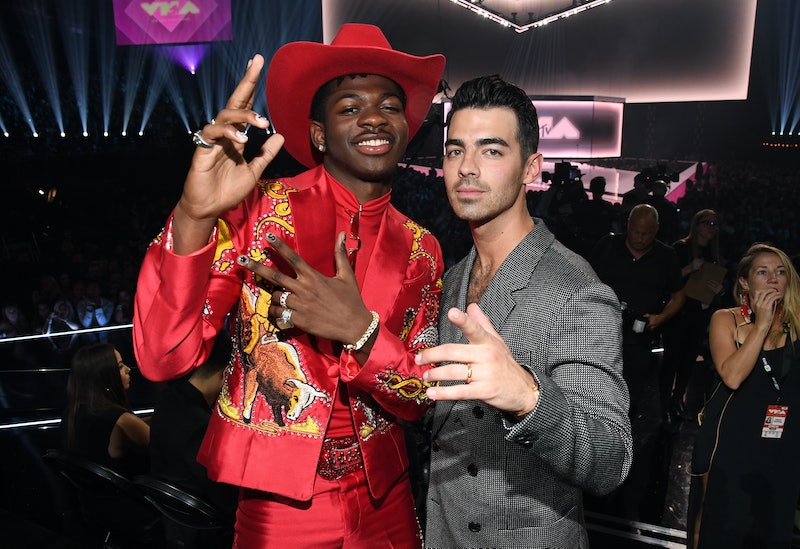 Ever since Lil Nas X put on his cowboy hat and released the mammoth viral hit that is "Old Town Road," everyone wants to take a joyride on the "Old Town Road" — even Joe Jonas. Although the Jonas Brother wasn't able to hop on an "Old Town Road" remix, he might still get the chance to team up with the rising artist. Lil Nas X invited Joe Jonas to do a "Panini" remix on Twitter, and fans are already demanding that this potential collaboration become a reality.

Jonas and Lil Nas X met for the first time at the 2019 MTV Video Music Awards, where they both performed their respective new singles and took home their first ever Moon Persons — Nas X won Song of the Year for "Old Town Road" with Billy Ray Cyrus, while the Jonas Brothers won Best Pop Video for their comeback single "Sucker". The boy bander is evidently a fan of the rapper, given that he posted a photo of the two together at the VMAs to his Twitter account and mourned that his "old town road remix never made the cut", an obvious joke at the amount of "Old Town Road" remixes that were released.

However, Lil Nas X reassured him that he had other plans for the JoBro, and gave fans hope for a collaboration. The rapper responded to the tweet, saying "imma let u on panini don’t worry," referring to his already infamous "Old Town Road" follow-up.

Immediately, fans started flooding the replies with demands to make the collaboration a reality — and how to do it. One Twitter user asked if the pair could make up a fun dance routine to the song (complete with the expert use of a Fresh Prince of Bel Air GIF), while another already declared the remix "a hit" without it even existing yet. One fan even photoshopped an image of Nas X sitting next to Jonas in the "Sucker" video, and they surprisingly make quite the intense pair.

Jonas is just as excited about the potential remix as his fans are, responding to Nas X's tweet with a celebratory dance reaction GIF of his own.

Given that Lil Nas X is the rising star of the rap world, Jonas might be inclined to show off his rapping skills again, for better or worse. Yes, Jonas has spit bars before on "Bounce," a song only true JoBros fans would know. While filming Camp Rock 2: The Final Jam, Nick, Joe, and Kevin teamed up with Demi Lovato and their bodyguard Big Rob for the joyous rap tune and its hilarious video, which is honestly a contender for their best song ever. Who can resist Demi's annoyingly catchy hook, Joe's (lack of) flow, or those classic dance movies? This is the true peak of Disney Channel, everyone.

Now the main question is whether Jonas will fly solo on the remix, or if he'll bring his brothers and bandmates Nick and Kevin along for the ride. Only time will tell.