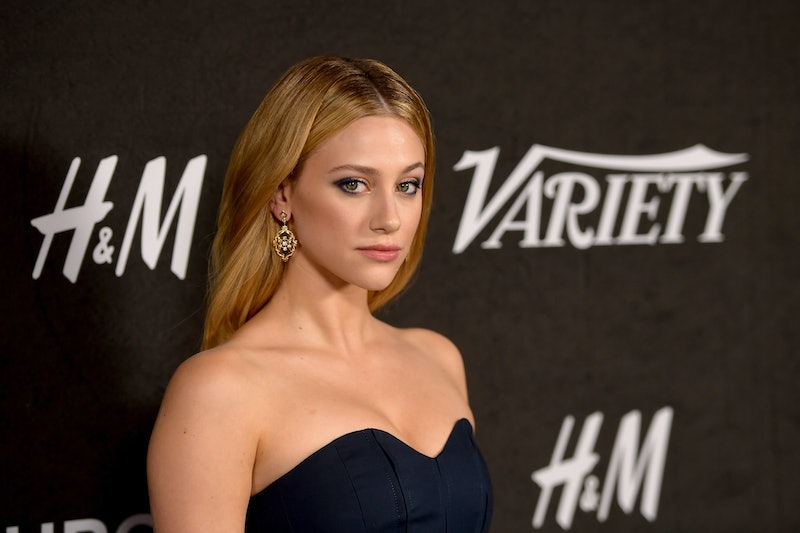 If you follow Riverdale actor Lili Reinhart on social media, you likely know she always keeps things super real with her fans. In an interview with Entertainment Tonight, which was published on Oct. 9, the star described exactly why that is. As the publication noted, Lili Reinhart explained her openness with her fans online, and honestly, her reasoning is completely on point.

"I try to [be open] because I'm not putting on a show," she told ET, continuing:

"I'm not trying to look perfect... my life in general is not extremely glamorous. I do a lot of really cool and glamorous things, but that's not my day to day. So I like to show off myself as being in my natural habitat, which is pretty much just in my bed, eating.”

Basically, Reinhart doesn't want to give her fans a false image of who she really is, which is totally understandable. And whether she's opening up about her issues with acne or joking about feeling a little tired, there's no doubt that fans are vibing with her honest social media presence (the actor has over 12 million followers on Instagram alone).

Reinhart's social media prowess, and her rise to fame, were hot topics during her recent discussion with Teen Vogue, in an interview published on Oct. 9. Just as she told ET, the Riverdale star explained she strives for authenticity on social media. However, she did bring up the fact that it's hard to balance just how much of herself she does share with her fans. She told Teen Vogue:

“It’s very much a constant balance of what do I share? What do I not share? I want to be authentic, but I also don’t want to give everyone parts of myself that they don’t need to know about. I’m mostly just trying to show the goofy and happy side of myself. Even if I’m feeling sad, I try to keep everything positive.”

Reinhart is known for being very honest, particularly with her fans. She's been open about some personal struggles that she's faced and ones that she continues to deal with. In a July interview with Harper's Bazaar, the actor opened up about her body dysmorphia and the body image issues she's dealt with since she was a teenager. Unfortunately, her interview was met with some dismissal by those on social media, which prompted her to release an incredibly important message on Twitter on July 4 to all of the naysayers.

"Feeling really disheartened by the fact that so many people are saying, 'you're skinny so shut up about embrscing [sic] your body,'" she wrote, "As if my body dysmorphia is irrelevant because of how I look to some people. I'm either not curvy enough or not skinny enough to feel insecure." In a follow-up tweet, she urged all of her followers to be respectful of one another, especially as it pertains to another person's insecurities, "You may not understand someone's insecurity- but respect it."

As the actor herself stated, she's not afraid to open up on social media because she wants to have that honest dialogue with her followers. Considering that she's written about many important, personal issues in the past, like she did in July, it's easy to see exactly why this kind of meaningful dialogue resonates with so many of her fans.