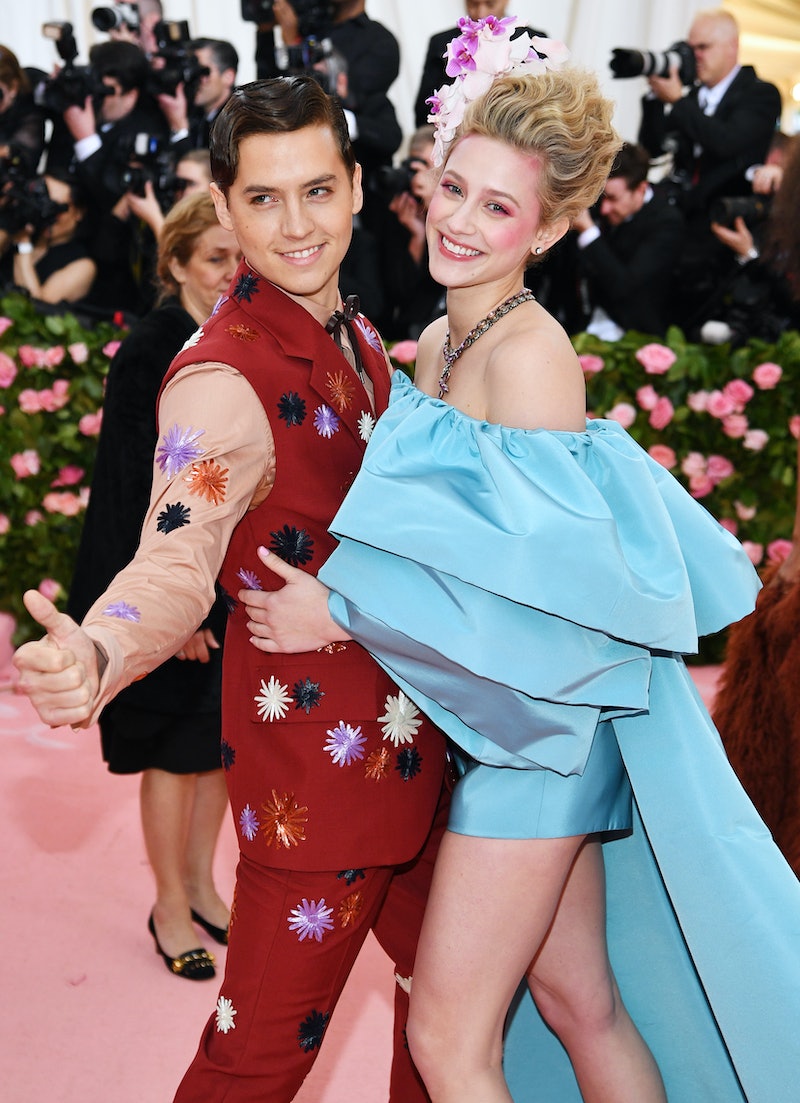 Don't worry, Riverdale fans — Betty Cooper and Jughead Jones appear to be still together, onscreen and off. On Saturday, Lili Reinhart wrote Cole Sprouse a birthday poem on Instagram, and the adorable post should put those break-up rumors to rest once and for all. In July, multiple reports surfaced that the Riverdale costars had split, as per Us Weekly, but the couple quickly shut down the talk online. On Sunday, Aug. 4, Sprouse turned 27, and Reinhart marked the occasion by sharing a throwback photo and an original poem for the star. The sweet gesture seemed to further deny the breakup rumor, and there's little reason to believe these two stars aren't still happily together.

On Instagram, Reinhart posted a photo of Sprouse, along with the birthday message about how meaningful their relationship is. She wrote:

"tried to find a poem that I could send to you. Because my words were failing me. But I searched and found nothing that did you justice. All of these love poems can’t get it right. No one else’s words could ever fit. They haven’t known the fortune it is to love you. -sappy nighttime birthday poem for @colesprouse."

In addition to the adorable poem, Reinhart also trolled Sprouse on her Instagram Story. She posted a picture of his twin Dylan Sprouse, writing, "happy birthday, baby!"

Reinhart's birthday message was not the first time these two stars denied breaking up on social media. Following the initial report of the split, both stars posed together for a W Magazine cover. Reinhart shared the magazine photoshoot with Sprouse on Instagram, writing:

BREAKING: A reliable source has confirmed that none of you know sh*t.

Sprouse shared the W Magazine cover on Instagram as well, including a joke in the caption about the rumor as well. He wrote, "UNPRECEDENTED: Cole Sprouse and Lili Reinhart consume the flesh of ‘reliable sources’ to fuel their bacchanalian sex cult."

Reinhart and Sprouse may have addressed the rumor online, but the couple has largely kept their relationship out of the spotlight. In the W Magazine interview, Reinhart addressed keeping the couple's desire for privacy "At first, I didn’t want things private," Reinhart said. "Now that I’m X amount of years in, I do appreciate the privacy we have, that he’s encouraged me to take. No one knows how long we’ve been together, and no one will until we’re ready to say it. No one knows how we fell in love, except for our close friends and us. It’s really special."

Fan interest in Reinhart and Sprouse's relationship has a lot to do with the couple's Riverdale characters, who are romantic interests onscreen as well. Sprouse noted that the show contributes to interest in the relationship in the W Magazine interview, but stressed that the two prioritize their own happiness. He said:

"I think part of the fun that the audience had, and still has, is going: What’s up with them right now? It’s interesting! But in all honesty, my own happiness and her happiness come before caring about what people are saying."

Fans of the series will be devastated if Jughead and Betty break up, both on-or-off screen. There's good news for now — given this adorable birthday note, it doesn't look like Reinhart and Sprouse couple are splitting up anytime soon.