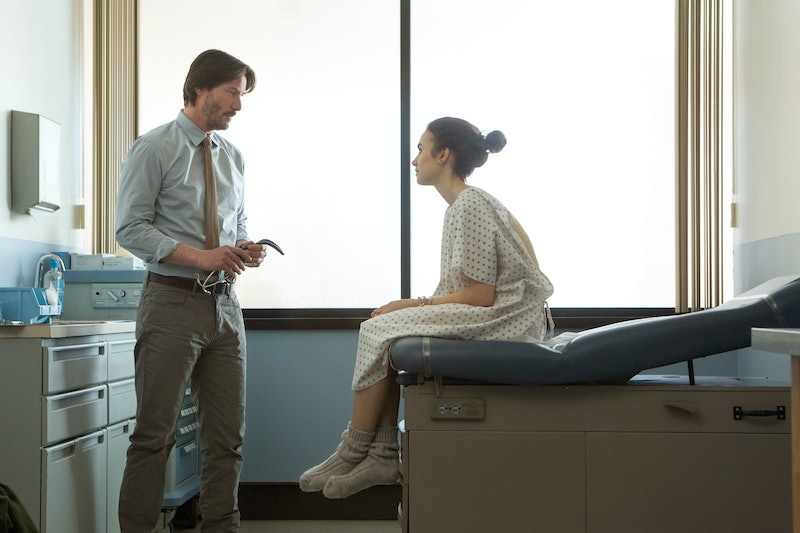 Actor Lily Collins wants her fans to know that she isn't a doctor. It seems obvious, right? Well, it might not be so cut and try. The lines become blurred when fans hear Collins' past with eating disorders and seek advice. Collins first opened up about her experience with an eating disorder in her 2017 book Unfiltered: No Shame, No Regrets, Just Me, and revisits the topic while promoting her film To the Bone. I sit down with Collins before the film's Netflix premiere on July 14, and she explains that while she's proud to be talking about her own experience with an eating disorder, her advice only goes so far.

"A lot of people — on the street or for screenings — have come up and started sharing their stories or explained how they can relate to my experience or what the book has done for them," the 27-year-old says. "I’m so honored that they feel trustworthy enough to tell me their stories."

One fan story in particular really sticks with Collins: a young woman who attended a To the Bone screening with her parents. "She was currently in the middle of a struggle but was seeking treatment," she recalls. "It was really interesting to see a family unit, how the film impacted them. It was very empowering, and I said that to her."

However, there's a line between inspiration and medical help. "I’m not an expert. I’m not a doctor," she says. "I’m an actor who chose to do a movie that is a very important one and have also gone through the subject matter it pertains to. There’s a line there."

While Collins is eager to open up about the hardships of her past, doctors are essential for the healthy recovery of those going through a similar situation. In To The Bone, Collins' character gets help from Dr. Beck, an unconventional doctor played by Keanu Reeves. Collin's admits that, "He gave [my character] a run for her money. I like directness, no BS. Sugarcoating — there’s no time for that. Don’t be mean, but let’s be real," she says.

She admits that though she appreciates that character's directness, it wouldn't be her real life advice to someone going through similar struggles. However, if there's something Collins can confidently offer, it's her real-life experience. "When your life’s mission and the mission of the film come together, it’s like magic," she says.

Rather than attempting to give fans medical advice, she wants them to know they're not alone. "As a woman, there are a lot of things I went through that I thought I was alone in. As a teenager, you feel like your experiences are isolated," she says. "I was surprised [by] how many people I could relate to."

Collins also wants fans to know that there's light at the end of the tunnel and that such hurdles don't define anyone. The actor explains how she embraces her past struggles:

In order to move through things, you have to take the shame out of it. You have to love yourself... better understand yourself. That’s just my experience. Everything happens for a reason and maybe at the time you don’t realize it. Take your weaknesses and use them as strengths, that’s an important way of using what you’ve been through.

Using past struggles as strengths is definitely easier said than done, but once it is, the rewards are limitless. Say, for instance, starring in a surefire Netflix hit and helping relate to countless young women and men in the process.