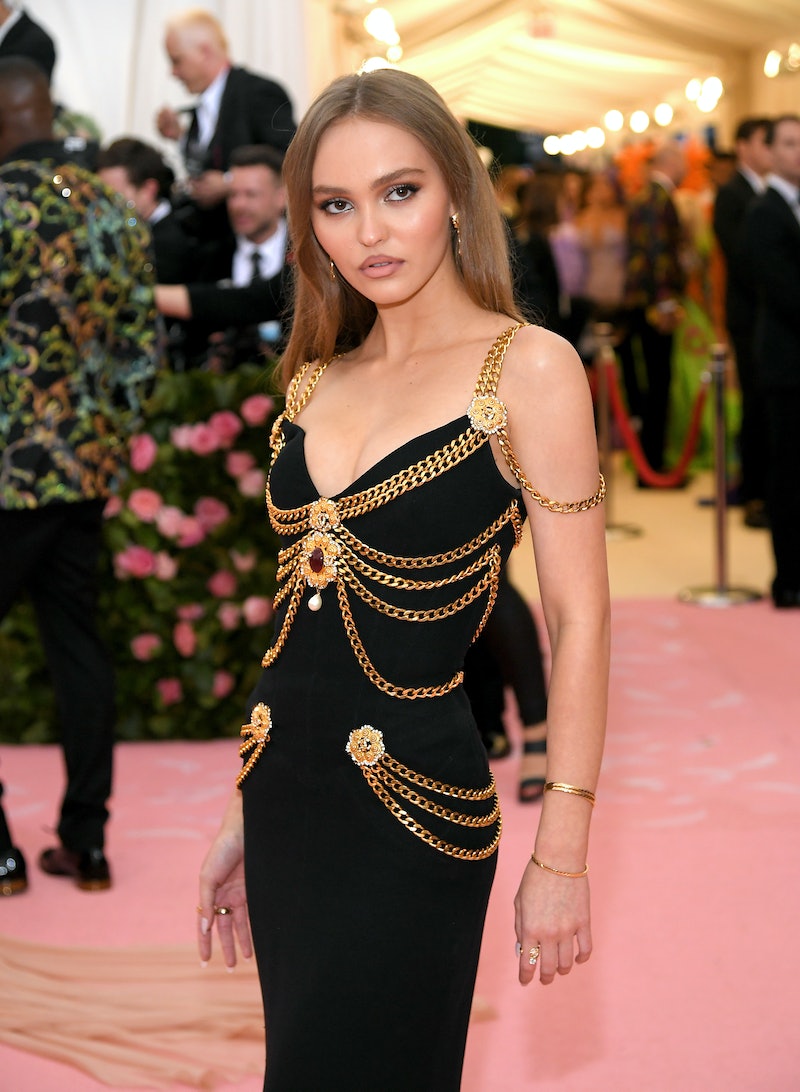 If you were too busy watching Lady Gaga unravel her pink parachute gown or Zendaya light up the pink carpet, you might have missed one of the most beautiful looks of the night. Lily-Rose Depp stepped onto the 2019 Met Gala stairs dripping in Chanel and looking like a total '90s supermodel. The irony of it all? She was barely alive during the decade (Depp was born in 1999). But she knows the era well. After all, both her parents, Johnny Depp and Vanessa Paradis, were hugely famous during that time and are arguably some of the biggest '90s fashion and beauty icons, so in a way, embracing the stylish, campy time period comes easy for the actress and model.

While the chic black dress that Depp wore — which was an archival early '90s Chanel piece — was certainly reminiscent of the little black numbers Cindy Crawford, Naomi Campbell, and Linda Evangelista wore during the heyday of the supermodel, it was her makeup that really pulled the entire over-the-top '90s look together. According to Nina Park, the celebrity makeup artist who created Lily-Rose Depp's stunning look, her makeup was meant to pay tribute to the decade.

"LRD and I love '90s era makeup. When we found out she was wearing an archival early '90s Chanel dress, we knew it would be the perfect time to amp this up," Park tells Bustle. "We wanted to go glam supermodel '90s, but keep it modern by keeping skin fresh and glowy," she adds.

To prep Depp's skin, Park applied the CHANEL Hydra Beauty Camellia Water Cream, which is something she uses with all of her clients. "I prepped by using a generous amount of [this product] as a mask and let it sit on her face for a few minutes. I then massaged all over and blotted off the excess with a tissue," Park shares. She really wanted to give Depp a youthful, dewy complexion so she only applied a small amount of CHANEL Les Beiges Fresh Water Tint in Light Medium to Depp's face. To contour, Park used the flesh tone from CHANEL Les 4 Ombres in Clair-Obscur and then CHANEL Joues Contraste in Rose Pétale to her cheeks and the nose. For highlight, she applied CHANEL Les Beiges Healthy Glow Luminous Colour in Medium.

Now that Depp's base was complete, Park wanted to go all out on her eyes, brows, and lips. "We wanted to tribute the over-the-top, more is more beauty ideals of the early '90s supermodels, but still keeping it beautiful and fresh," Park tells Bustle. To do this, Park wanted to focus on an exaggerated crease, visible lip liner (of course), and elongated eyebrows.

Park applied CHANEL Stylo Yeux Waterproof in Mat Taupe to create an elongated shape that was thinner at the lash line and then thicker beyond the lids. Using the darkest color from CHANEL Les 4 Ombres in Clair-Obscur, she blurred the edges of the eyeliner. Next, she applied the main shade from the same quad eyeshadow palette to the crease of the lids and then at the center, used the lighter shade, followed by the third shade, a soft brown, to deepen the crease line. To recreate this look at home, Park suggests using a synthetic lip brush and "stamp in the darker color just above the crease to give the impression of a larger, pronounced lid."

To define Depp's statement brows, Park used CHANEL Stylo Sourcils Waterproof in Blond Doré followed by the taupe shade from the CHANEL Les 4 Ombres in Clair-Obscur she used to contour Depp's face earlier. Then, she applied several coats of CHANEL Inimitable Mascara in Noir to Depp's top and bottom lashes. "When you think you’re done putting on mascara, add another layer or two," suggests Park.

"To make your lips last all night, line and fill in with lip liner and press in your favorite lip color in the center with fingers," Park advises.

For a full rundown of all of the products Park used on Lily-Rose Depp, click here.