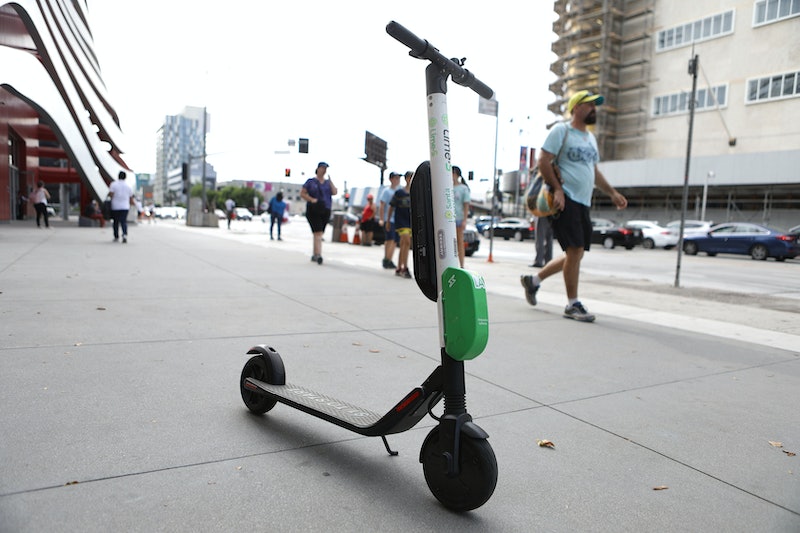 If you are someone who rides Lime scooters or has considered riding a Lime scooter, listen up. As reported by the Washington Post, Lime reported that its electric scooters are braking suddenly, causing some riders to be injured. When riding a scooter, there are some things you want, like getting to your destination. There are some things you hope to avoid, like accidentally falling off due to your own ineptness. And then there's some things that shouldn't even been in the realm of possibility, like "sudden excessive braking during use," to use Lime's words.

On February 23, Lime released a Safety Update that explained the company "detected a bug in the firmware of our scooter fleet that under rare circumstances could cause sudden excessive braking during use." According to Lime, the rare circumstance tends to be while someone is riding downhill at top speed and hits an obstacle in the road or a pothole. When this happens "excessive brake force on the front wheel can occur, resulting in a scooter stopping unexpectedly."

Lime says that the firmware is being updated and that the final update will be in place soon. According to the company, the sudden braking has occurred with less than 0.0045 percent of all Lime rides. They explain that there have been injuries, with most being "bumps and bruises," but that "any injury is one too many."

As noted by Forbes, this issue led to use of the scooters being suspended Auckland, New Zealand, where they were in trial. The Auckland Council website states that Lime found 155 incidents of sudden braking with 30 resulting in injury; 92 of the incidents were in Auckland, as were 19 of the injuries.

For those who aren't familiar, Lime is a transportation sharing company that places scooters and bikes in cities around the world for people to rent using an app. According to Lime, "Through the equitable distribution of shared scooters, bikes and transit vehicles, we aim to reduce dependence on personal automobiles for short distance transportation and leave future generations with a cleaner, healthier planet." Lime lists safety instructions on its site, including following local helmet and traffic laws, doing a safety check before riding, and being aware of hazards in the road.

The current issue is the far from the first one Lime has faced. Forbes reports that there was a similar issue in Switzerland in January, which also involved malfunctioning brakes. There have been a few Lime scooter-related deaths, including one person who was struck by an SUV, and one person who suffered head injuries after falling off of one while not wearing a helmet, according to ABC News. In 2018, there was also an issue of some scooters catching on fire due to bad batteries. This issue "impacted less than 0.01% of our scooter fleet," according to Lime. In the same October 2018 statement, Lime also addressed scooter baseboards that were breaking.

For anyone who uses the scooters, it's a good idea to keep up-to-date on the news involving them and to follow along with any issues they may be having in your city.