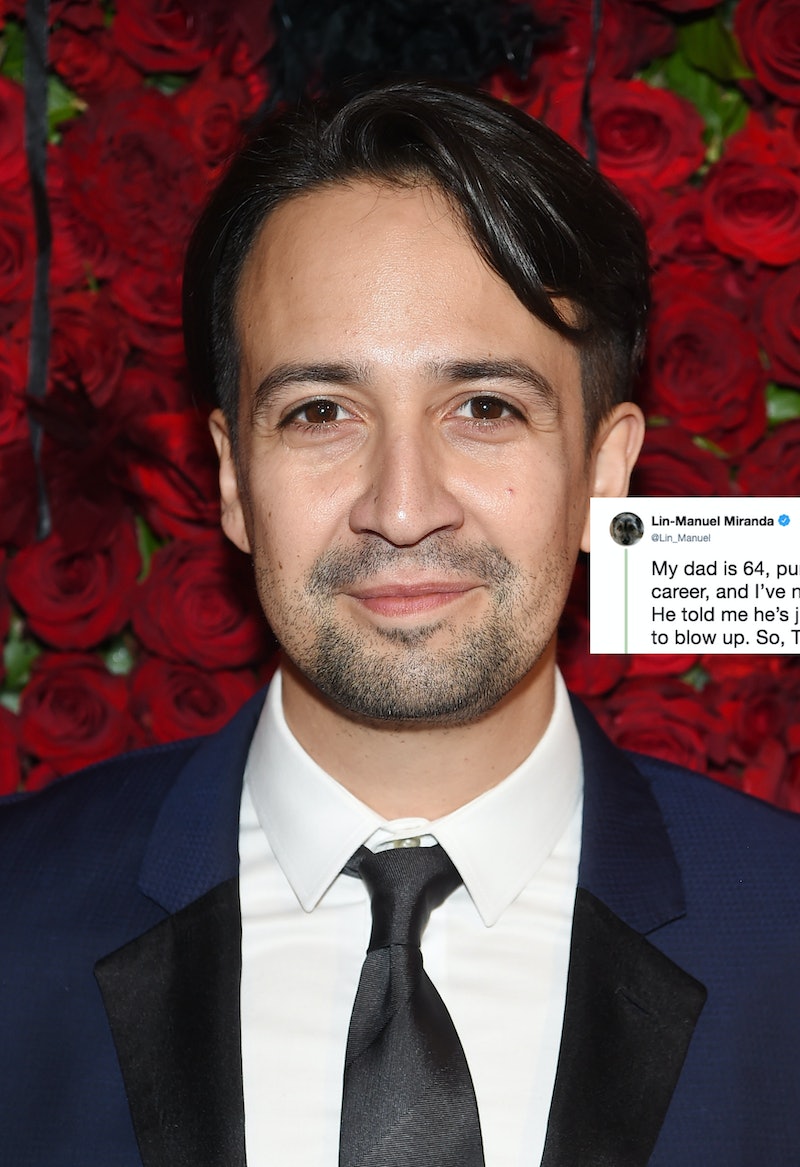 Even celebrities can't resist the call of a good meme. On Monday, Lin-Manuel Miranda posted his own dad pursuing modeling meme, and it might just be the greatest one yet. The Mary Poppins Returns star shared several photos of his father, Luis Miranda, on Twitter. In the photos, Luis can be seen wearing a red suit jacket, standing with Ricky Martin, riding an elevator with his son, and relaxing in a swivel chair. Unfortunately for modeling agencies looking to sign Miranda's fashionable father, he wasn't actually putting together a portfolio. Instead, he was joining in on a popular Twitter trend.

The "dads pursuing modeling careers" meme began on Thursday, when Twitter user @coolcat_collin introduced his father, along with four glamorous photos. He wrote,

"My dad is 45, pursuing a modeling career, and I’ve never seen him happier. He told me he’s just waiting for a chance to blow up. So, Twitter, meet my dad."

People quickly turned the earnest tweet into a funny joke, using the format to share aspirational photos of their own "dads." Among the most notable fake dads in the tweets were Steve Carell, Larry David, Beto O'Rourke, Guy Fieri, Ted Danson, and, inexplicably, Mr. Krabs. Miranda couldn't help but join in the fun, instead adding his own dad to the mix.

The unexpected tweet came just a day after the Hamilton creator said he would avoid Twitter. On Thursday, Miranda told fans, "Okay back to my French undersea Garfield cave w all my things byyyye." He also added that the first of the month was yet another reason to stay away from social media, writing, "*sees Monday is April Fools Day* Ugh. See you Tuesday!"

However, given the quality of the meme, he apparently couldn't stay away for long. Miranda justified his post on Twitter, writing, "(I’ve been training all my life for this meme okay goodbye)."

Fans loved the sweet post, even if the star didn't keep his promise about taking a break from the platform. One fan tweeted how funny the post was, writing, ""BAHAHAHA PERFECT WAY TO COME BACK TO TWITTER WHEN YOU SAID YOU WOULDN’T." Another tweeted in response, "Nice April Fools, coming back early. I'm glad you're back early! And I LOVE THOSE PICS." Another user joked Luis Miranda might get a modeling contract out of the post, writing, "Luis: *signs modeling contract* Lin: "IT WAS AN APRIL FOOLS' JOKE, FFS!"

Miranda may not be a big fan of the prank-filled holiday, but it does seem he's been in the mood for shenanigans as of late. On March 20, Miranda surprised Hamilton fans in Detroit, making an appearance onstage at the end of the show, according to People. The cast was joined by the star to thank the audience for their patronage. "Thank you for supporting live theatre. I love you, Detroit," he said. "I signed a fresh batch of posters for ya. Thank you very much."

Fans get understandably bummed when Miranda takes a break from social media, so his participation in the "dads pursuing modeling" meme was the perfect April Fool's Day surprise. However, given the likelihood that Miranda's tweet could result in his father accidentally getting a real modeling deal, the joke may just be on him.