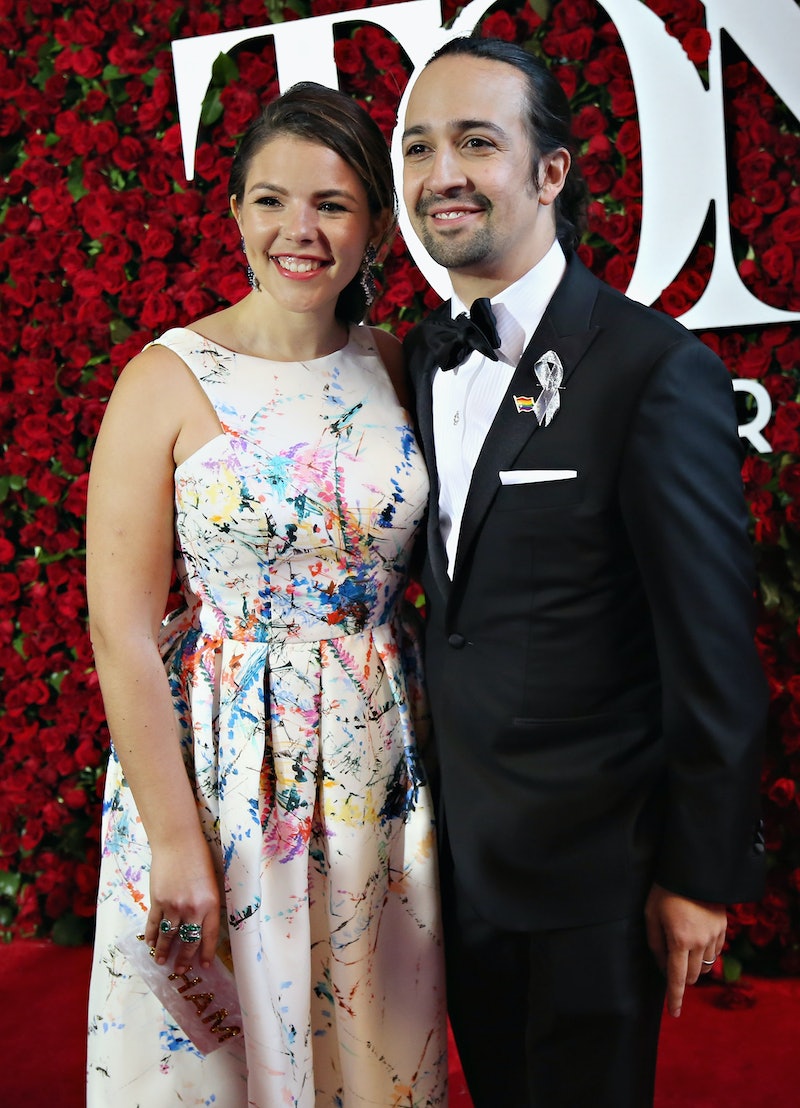 Sometimes, the best way to announce big news is by not announcing it at all. It's official: Lin-Manuel Miranda and Vanessa Nadal are expecting their second child, and rather than making a formal announcement to fill the Hamilton genius' fans in, they chose to let her baby bump speak for itself. When Nadal and Miranda arrived on the red carpet before the London Evening Standard Theater Awards on Sunday night, she was very obviously pregnant, so the secret was finally out.

So far, Miranda hasn't shared any details about the pregnancy — not even how far along Nadal is — but knowing him, that's not surprising, since he likes to keep his personal life pretty private and just shares bits and pieces with fans here and there. But he did take to Twitter to confirm the news when someone asked, responding with a simple, "Oh hell yeah."

Een better than Miranda's response to that question was how he described the way his son, Sebastian, is taking the news. Apparently, the 3-year-old is so thrilled that he's become very impatient while waiting for his mom to give birth, even saying that he's waiting for his mother to "hatch." As precious as that is, it also sounds like Miranda and Nadal are going to have a few things to clear up when Sebastian's old enough for The Talk.

And, for the record, Nadal and her bump, both dressed in floral, looked fantastic in the photo that got everyone talking.

This family has always been a very adorable one, so this cute reaction from Sebastian isn't surprising at all. But even though he is obviously really excited to meet his future little brother or sister, don't expect to catch their dad sharing photos of their faces online. As perfect as those baby photos would obviously be, Miranda is very private when it comes to photos of his son, so he'll probably be the same way with baby number two. He famously avoids showing Sebastian's face on social media, and even asked fans to crop him out if they saw the family at the Macy's Thanksgiving Day Parade together.

Fortunately, it sounds like everyone followed directions, because Miranda got super pumped when he noticed this fan blurred out Sebastian when he spotted their family, just as requested. Very cool of him, right?

But even though we won't get to see many photos of the new baby (if any), it's safe to assume that Miranda won't hold back when it comes to talking about the cute or funny things he or she does. After all, when he took Sebastian to see Hamilton for the first time, he told the story of how he hated it during an appearance on The Tonight Show Starring Jimmy Fallon earlier this year. Apparently, the only song he actually liked was "Dear Theodosia," and that's only because he thought his mom wrote it.

In fact, he even live tweeted Sebastian's commentary, and it's absolutely priceless. It's also proof that even though he likes to keep his kid's face hidden, he also loves to share some of their best moments with his followers, so there's plenty to look forward to when his second child is born... especially if he or she is as sassy as Sebastian.

Even though the photo and tweets are cute, it definitely sounds like Sebastian wasn't a huge fan overall, according to Miranda's interview. Maybe his brother or sister will be able to appreciate the show more? You never know. At the very least, it seems likely that Sebastian has a future as a professional theater critic.

Maybe, Miranda and Nadal will offer up more details about their baby-to-be soon, but even if they don't, it's impossible not to be happy for this adorable and growing family. Their future baby is so lucky.