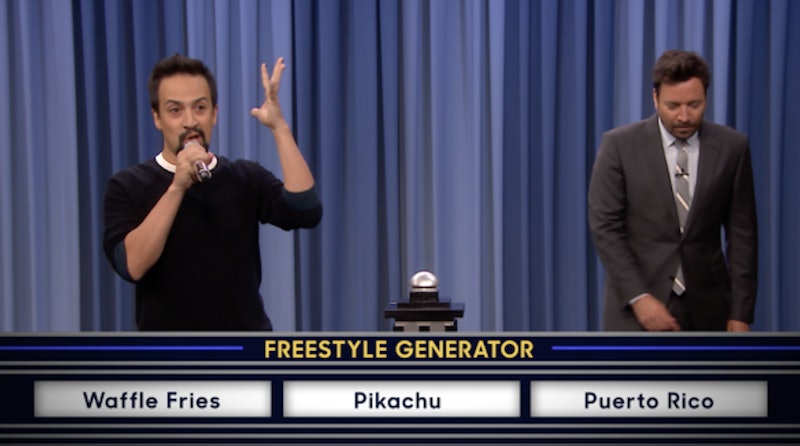 It should surprise no one that the man who wrote Hamilton is good at freestyling. But Lin-Manuel Miranda's Wheel Of Freestyle, Vol 3 on The Tonight Show Starring Jimmy Fallon was next level. In the latest edition of Fallon's late night rap game, Miranda was forced to write one rhyme using three random words like "flip flops," "seared salmon," and "prescription sunglasses." And somehow he made it sound good, like so good you might wish you could download it.

On Tuesday night (June 18), Miranda stopped by The Tonight Show for his third round of Wheel of Freestyle after having last shown up in 2016 to try and out-rap The Roots' Tarik Trotter, AKA Black Thought. Taking on The Roots' resident freestyler would never be easy, but throw in the fact that Miranda is forced to use words that aren't so easy to rhyme makes it nearly impossible. But Miranda, who made Alexander Hamilton's life rap-worthy, was up for the challenge.

So The Roots gave him a beat and he started off rapping about being hit in the back of the head with a pair of flip flops and being "smooth like that seared salmon," a saying that should be added into the lexicon immediately. By the end, Miranda was letting everyone in the studio know he was going to hit them with the "Blublockers, prescription sunglasses," which Fallon thought was bonus points worthy. It's hard to disagree with him.

Not to be outdone, Black Thought managed to make something out of "loofah," "Netflix password," and "Daenerys Targaryen," which as Black Thought pointed out isn't that hard to rhyme stuff with. "Rastafarian," he said matter of factly after seeing the words he'd been given to work with. In the end, he rhymed "Targaryen" with "barbarian," which made Miranda bend the knee.

However, the Broadway star came to win, torching Black Thought's Iron Throne not unlike Dany's dragon Drogon with a freestyle that featured "waffle fries," "Pikachu," and "Puerto Rico." No surprise, he caught them all in a rhyme that happened to end with a little tribute to Black Thought. And if the mics weren't so damn expensive he probably would have dropped it.

Those who want to hear more Miranda freestyles are in luck. On The Tonight Show, Miranda announced he's returning to Broadway this fall with his freestyle hip-hop group Freestyle Love Supreme, which just so happened to be his first performing love.

“Before Hamilton, before In the Heights," Miranda told Fallon, there was his freestyle group, which he originally formed in 2004 with Anthony Veneziale and Thomas Kali. In September, the show, Freestyle Love Supreme, will play the Booth Theater with a "rotating cast of unannounced players at each performance," according to Billboard.