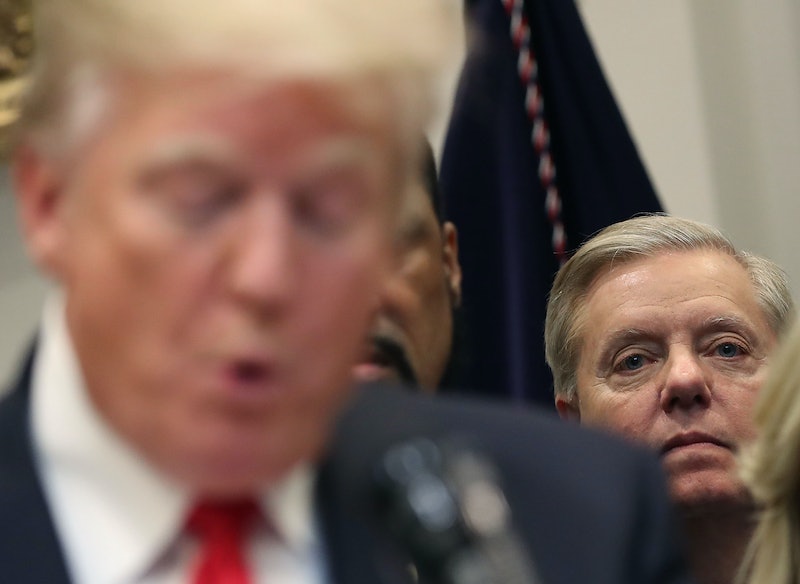 Lies apparently don't bother Sen. Lindsey Graham too much. In an interview with Fox News on Friday, the Republican senator said he didn't think President Donald Trump was always telling the truth, but that, ultimately, it didn't bother him too much. In fact, Graham said he didn't mind Trump lying about sex because he thought "most people" would.

While speaking with Fox New's Neil Cavuto on Friday, Graham admitted that he doesn't actually believe everything the president says. "No, no," Graham said when asked if he believed all of Trump's statements regarding alleged campaign-finance violations and an alleged extramarital affair with Stormy Daniels. "He's always under siege. He is saying this one minute and that the next. It's what he does that matters."

In fact, Graham said he felt that most people would lie about sex or to cover up an affair. "He is like every other person," Graham said of Trump. "You know, Bill Clinton lied about having sexual relationships with that woman. I voted against that article of impeachment because I think most people, blindsided, would lie to protect their family. Lying about sex wasn’t enough then for me, and it’s not enough now."

But while former President Bill Clinton lied about having had "sexual relations" with Monica Lewinsky, Trump lied about making a $130,000 hush-money payment to adult film star Stormy Daniels during the 2016 presidential campaign. Although Trump has admitted to authorizing and reimbursing his lawyer for the payment, he has denied Daniels' allegations of an affair.

"The agreement was used to stop the false and extortionist accusations made by her about an affair," Trump tweeted in May.

What's more, while Graham was in fact the only Republican to vote against an article of impeachment tied to charges of alleged perjury in the lawsuit Paula Jones brought against him, he did vote in favor of two other articles of impeachment tied to the Lewinsky affair — grand jury perjury and obstruction of justice — according to CNN. In fact, Graham was one of a handful of Republicans who aggressively pushed for Clinton to be impeached from office.

As Representative-elect Alexandria Ocasio-Cortez pointed out on Twitter, Graham famously sought to establish a standard for impeachment in 1999, arguing that the process was more about protecting the dignity and honor of the Office of the President. "The point I'm trying to make, is that you don't even have to be convicted of a crime to lose your job in this Constitutional Republic if this body determines your conduct as a public official is clearly out of bounds in your role," a CNN transcript quoted Graham as having said on the House floor. "Because impeachment is not about punishment. Impeachment is about cleansing the office. Impeachment is about restoring honor and integrity to the office."

Over the weekend, Ocasio-Cortez appeared to call Graham out for hypocrisy. "Sen. Graham himself established a standard that demands Trump's impeachment," the representative-elect wrote in a tweet featuring video of Graham's 1999 comments.