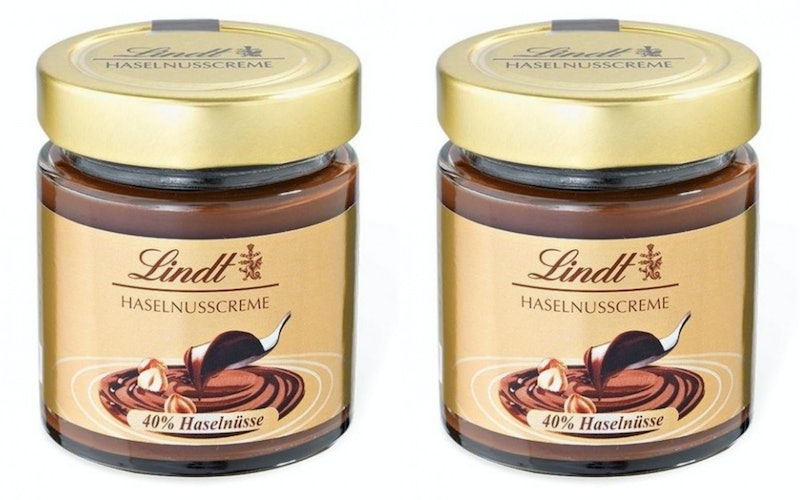 Look out, Nutella — you’ve got a challenger at your doorstep: Lindt makes a chocolate hazelnut spread now, too. What’s more, Lindt’s Hazelnut Cream, as it’s called, differs from Nutella in one key way: It’s got waaaaay more hazelnut in it. Will that be enough to sway loyal Nutella enthusiasts over to… well, maybe not the dark side, but a different side, at least? The jury’s still out on that — although there’s a catch here, too: It’s only available in the UK and continental Europe.

Cue the sad trombones for those of us who live… uh… everywhere else in the world.

According to TIME, Lindt's Hazelnut Cream has been available across Europe for some time (Fresh-Store.EU has it for €10.99, for example); however, it’s not always marketed under that same name. Hitherto, it's been known mostly by its German name, “Haselnusscreme.” The spread is making waves right now due to the fact that it’s finally arrived in the UK — which, naturally, has made rather a lot of people very happy indeed. (There are more than 66 million people living in the UK today, and while I would imagine not all of them are chocolate and/or hazelnut fans, a good many probably are. Because, I mean… chocolate and hazelnuts are delicious.)

But why? Why would this be such big news with Nutella already the top dog of chocolate hazelnut spreads? Part of me wonders if a bit of it might rooted in pride of history. Compared to Lindt, Ferrero Rocher, which makes Nutella, is actually kind of an upstart whippersnapper; it was founded in 1946, with Nutella’s precursor, SuperCrema, coming along in 1951 and Nutella itself arriving in 1964. Lindt, meanwhile, can trace its roots all the way back to 1854, more than a century prior to the founding of Ferrero Rocher. The Lindor truffle — Lindt’s signature treat — was invented in 1949. Both companies use hazelnuts in a lot of their offerings, although these days, Nutella uses a full quarter of the world’s hazelnut crop. Wowzers.

Then again, there’s also the matter of the recipe itself. You have to go to the UK site for Nutella to see the percentage of each ingredient — U.S. labeling doesn’t include it — but if you head on over there, you can see that Nutella is about 13 percent hazelnuts. Lindt’s spread, meanwhile, is a whopping 40 percent hazelnuts. The rest of the ingredients are quite similar — there’s skimmed milk powder, cocoa, sugar, vanilla, and soya lecithin in both, although Lindt uses cocoa butter, while Nutella has palm oil — but that difference in hazelnut percentage is likely to provide quite a different tasting experience. Maybe each spread just appeals to different people depending on how heavy they like their hazelnut flavor.

Or, heck, maybe it’s just the novelty factor. Nutella has been around for ages; we all know what it tastes like. Lindt’s offering is brand-spanking-new, so of course folks are falling all over themselves to try it. Who wouldn't?

In any event, Lindt Hazelnut Cream is, as they say, flying off shelves — and the internet. Happily, you can buy it online if you happen to be in the correct area of the world for it… but it’s going fast. At least there’s a little ticker on Lindt’s product page for the spread that tells you how many jars of it are currently available, right? It updates whenever you refresh the page. To give you an idea of how quickly it’s going, in the space of about half an hour, I watched the ticker drop from 371 available jars to 354, so do with that what you will.

The good news is that they seem to be good about restocking it: When TIME’s piece on the spread was published on July 3, it was sold out; today, though, it was back in stock. Hoorah for that! It costs £5.99 per jar, or around $7.92. Useful information.

Also, here’s a tip from Mental Floss: You can get a hold of Lindt’s Hazelnut Cream in the United States… if you’re willing to go the extra mile for it. Jars are available via third-party sellers on Amazon for about $22.50. That’s quite a substantial markup — almost three times what a jar is typically worth according to its standard retail price — but, I mean, hey, if you’re willing to shell out that much for it, then have at. (Just be aware that counterfeits sold by third-party sellers on Amazon are a thing, so vet your product choice carefully.)

In the meantime, at least those of us without Lindt’s delightful-sounding new treat can still scratch our chocolate hazelnut itch with good ol’ Nutella. Here’s hoping Lindt Hazelnut Cream does arriving in the United States eventually, though!

More like this
TikTok’s Viral Tunacado Sandwich Is The Internet’s Favorite Lunch Right Now
By Alexis Morillo
16 Friendsgiving Recipes Your Besties Will Love
By Alexis Morillo
How Long Does Leftover Stuffing Last? Here's When To Toss It
By Chelsey Grasso and Alexis Morillo
Pepsi’s Festive Flavour Is Finally Coming To The UK
By Sophie McEvoy
Get Even More From Bustle — Sign Up For The Newsletter