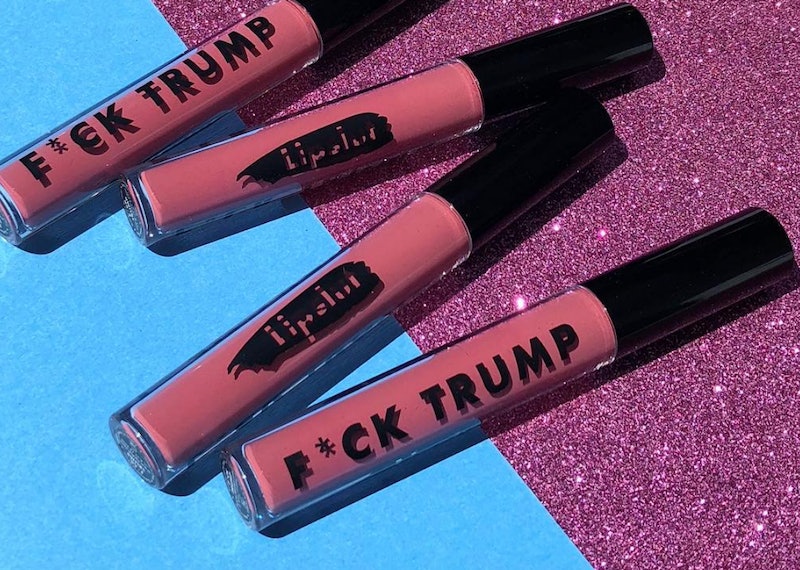 Donald Trump's recent zero tolerance immigration policy has had many Americans in an uproar — rightfully so. Images of children being displaced and separated from their families are horrifying. Lipslut has reacted with a new F*ck Trump lipstick fundraiser to fight these immigration initiatives.

From now through July 19, Lipslut is donating 100 percent of the proceeds from orders of its previously existing F*ck Trump lipstick towards organizations that are dedicated to helping families that have been affected by the policy.

Those groups include RAICES, KIND, Las Americas Immigrant Advocacy Center, Young Center for Immigrant Children's Rights, and Al Otro Lado, according to an email Bustle received from the brand.

This matte, mid-tone, and nude x pink liquid lippie is utterly lovely. It also has a focused mission.

If you thought lipstick was simply about prettifying your pout, you thought wrong. It is a high impact tool for change and one that empowers the women who wear it in multiple ways.

This fundraising effort falls right in line with the brand's ethos, which is to integrate philanthropy into every day life while delivering quality cosmetics. Lipslut's core goals are to promote feminism and self-expression, all the while working to right social wrongs.

Lipslut was officially founded by Cal Poly San Luis Obispo student Katie Sones on the very night of Trump's inauguration. Her goal was to be a "middle finger to the current socio-political landscape."

Sones quickly realized that her passion for beauty products could be translated into an agent of change and for a greater good. Normally, the brand donates half of all earnings from the F*ck Trump lippies to civil right charities that aid groups targeted by Trump's initiatives. The charities are chosen by the purchaser.

Previously, the brand helped raise $40,000 towards victims of the Charlottesville attacks through its lipstick sales. In its first year, Lipslut sold over 10,000 tubes of its "looks good on everyone" shades and donated over $80,000 of its quarter of a million dollar revenue to charity.

The math is really simple — the brand gives back and does good. More indie brands should follow Lipslut's lead.

The swirly swatch shows just how gorgeous and wearable this mega matte lippie is.

Purchasing a F*ck Trump liquid lippie is an easy and effective way to do your part to fight against government objectives that you disagree with. You get a stunning, dusty pink lipstick with which to paint your lips, all the while donating towards important causes. You can look good but feel better about making a difference. You can wear this sexy shade in good conscience. It's subtle activism.

Join the lipstick revolution with Lipslut!

Lipstick can send a powerful message. Lipslut is certainly changing the conversation and reminding us that makeup isn't a frivolous endeavor. Not only does it inspire creativity among users but it also can be a force for good.

While President Trump has reversed the policy that separates immigrant children from their families, you can and should still support this Lipslut campaign. Many Americans will continue to feel the ripple effect of the policy regardless of the fact that it was overturned.

Pick up a pink lippie and paint your pucker for your fellow people. It's cosmetics with a conscience and a lippie that is socially conscious.