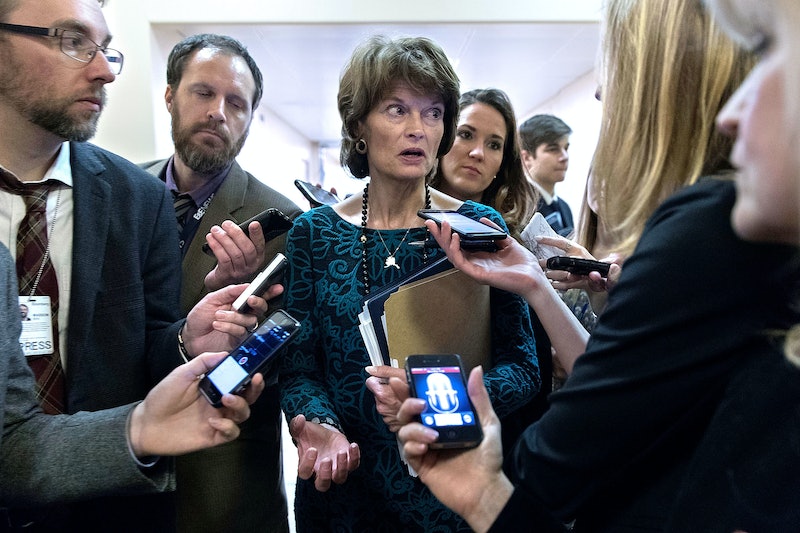 Early Friday morning, three Republican senators broke with their party and scuttled the so-called "skinny repeal" health care bill, thwarting the GOP's efforts to undo the Affordable Care Act for the foreseeable future. While it was Arizona Senator John McCain who cast the decisive vote at the end, it was Alaska Senator Lisa Murkowski and Maine Senator Susan Collins who publicly opposed the Senate bill for weeks, taking a huge amount of heat in the process. And it's important to remember why: Collins and Murkowski defended Planned Parenthood from Trump and the all-male Republican leadership who crafted the bill, just like they said they would from the outset.

When the Senate's version of the bill ― the Better Care Reconciliation Act, or BCRA ― was initially written, it was impossible not to notice the staggering maleness of the people in charge. Despite the fact that there are five Republican women serving in the Senate, any of whom could have been involved in crafting the legislation, they were shut out of the process entirely, in favor of a group of 13 men.

As it turns out, when you're putting together a bill with little-to-no margin for error for passage, accepting no input whatsoever from the women in your political coalition has consequences. Despite the fact that the Republican Party is deeply hostile to Planned Parenthood on the whole, thanks to its status as the foremost American provider of reproductive health care services, including abortion, both Collins and Murkowski have publicly supported the organization.

This has made them relative outsiders within their own party. Collins, for example, has occasionally come down on the pro-choice side of the reproductive rights debate, voting against banning late-term abortions, and against stripping abortion providers of funding from the Department of Health and Human Services.

Murkowski has a mixed record on reproductive rights, having both cast some pro-life aligned votes in the past ― such as voting for a 2003 bill banning late-term abortions ― and some that mesh with the pro-choice side, like her longstanding refusal to defund Planned Parenthood.

Neither of them, in other words, are totally in line with so many of their many fire-breathing, socially conservative male colleagues on these issues. And considering Senate Majority Leader Mitch McConnell knew full well the bill couldn't pass if three of his senators defected, cutting women out of the writing process and insisting on including the Planned Parenthood language in the bill ended up being fatally flawed decisions.

It's also hugely noteworthy ― and for advocates of reproductive rights, praiseworthy ― that even amid the rabidly anti-Planned Parenthood GOP, a pair of women with the power to make a difference stood up in the organization's defense.

They warned their party that they weren't bluffing, too. Murkowski was telling people she wouldn't support defunding Planned Parenthood as part of an Obamacare repeal months before the Senate took up the bill. According to The Hill, she gave her assurance to the Alaska state legislature in February.

When the bill was finally written, Collins warned that the inclusion of the Planned Parenthood defund was a "mistake," and that she could not vote for it. She's also hailed Planned Parenthood as "an important provider of health care services, including family planning and cancer screenings for millions of Americans, particularly women."

Neither of them ever wavered from their support for Planned Parenthood and the essential services it provides to women, even as the heat turned up when the bill started creeping closer and closer to passage.

Had McConnell and the Republican leadership invited the pair into the process of writing the bill (or even just one of them), they might have seen this coming, or at least taken their objections seriously enough to have shelved the proposal, or saved it for a different piece of legislation. But that's not how it worked out; instead, McConnell clearly believe he could cobble together at least 50 votes in spite of their objections, a confidence that was proven wrong on Friday morning.

In short, although Murkowski and Collins might not be quite as staunch or purely supporting of reproductive rights as many on the progressive left, they made a dramatic statement and a forceful stand in defense of women's health, with the full weight of their decidedly anti-reproductive rights political party bearing down on them. And amid all the drama of Friday morning's vote and the ensuing political aftermath, that really shouldn't be overlooked ― the reproductive rights community should give both of them a tremendous thanks.