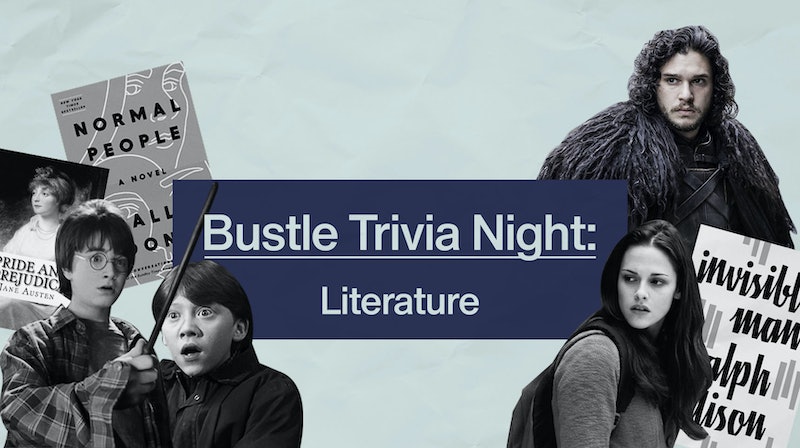 Being stuck inside is the perfect excuse to catch up on all of the books that have accumulated on your shelves over the years. If you've found yourself escaping into new novels during the quarantine, why not test your and your friends' knowledge of all things literature with these 50 trivia night questions about books?

From modern-day romance novels to the classics, we've broken down this literature trivia into five categories: Harry Potter, Game of Thrones, Romantic Fiction, YA Fiction, and the American Classics. While trivia night may feel different these days, there's no reason it has to stop. Just schedule a Zoom call with your friends and get ready to learn who was paying attention the most in school. (Answers are at the bottom to prevent peeking.)

You can also download Bustle's Literature Trivia here and share it with your friends ahead of trivia night.

1) What is the core of Harry Potter’s wand made out of?

2) What is the name of the inn visited by Harry and his fellow Hogwarts students in the town of Hogsmeade?

3) What is Hagrid’s first name?

4) What does Harry use to swim under water during the second challenge in Harry Potter and the Goblet of Fire?

5) What is the name of the wizarding world’s highest court of law?

7) Who owned the ice cream parlor on Diagon Alley before disappearing in 1996?

8) What is the name of the town where Harry’s relatives, the Dursleys, live?

9) Where does Dumbledore’s Army meet during Harry Potter and the Order of the Phoenix?

10) During Harry Potter and the Half Blood Prince, Harry wins a competition in potions class for brewing the best Draught of Living Death. What is his prize?

12) Robert Baratheon and Cersei Lannister have three children together. What are their names from oldest to youngest?

13) What does Arya Stark name her direwolf cub in A Game of Thrones?

14) What is the sigil of the House of Lannister?

15) What is the name of Renly Baratheon’s personal defense force?

17) What is the name of the master swordsman hired by Sir Eddard Stark to teach his daughter Arya the "Water Dance"?

18) What are the three city ports of Slaver’s Bay conquered by Daenerys Targaryen in A Storm of Swords?

19) The citadel is home to the order of maesters. Which ancient Westerosi city is it located within?

20) How old is Jon Snow when he joins the Night’s Watch?

21) In The Notebook, Noah takes Allie out on the lake by the house he has restored. What surrounds them while they are on the water?

22) Complete the following line from Jane Austen’s Pride and Prejudice: “It is a truth universally acknowledged, that a single man in possession of a good fortune, must be in want of ______”

23) What is the name of Christian’s helicopter in 50 Shades of Grey?

24) Marianne and Connell grow up in which part of Ireland in Normal People?

25) In Bridget Jones, we meet Bridget on New Year’s Day where she is due to attend a buffet at Una and Geoffrey Alconbury’s house. What dish will be served?

26) In P.S. I Love You, Gerry’s final letter to Holly explains that he doesn’t have much time because he is writing it while she is where?

27) What is Jamie’s nickname for Claire in Diana Gabaldon’s Outlander books?

28) How many letters does Lara Jean send in To All The Boys I’ve Loved Before?

29) In Crazy Rich Asians, Rachel is a professor at what university?

30) Emma Corrigan, the central character in Sophie Kinsella’s Can You Keep A Secret?, works at what multinational company?

31) What day did Alison disappear in Pretty Little Liars?

32) What is the name of the high school Bella attends in Twilight?

33) Who was Katniss and Peeta’s mentor in The Hunger Games?

34) What is the only school Blair doesn’t get rejected from in the Gossip Girl books?

35) What is the name of the clique in The Clique?

36) What tattoo does Adam have on the back of his ear in The A-List?

37) What is the name of the private school Jenny attends in the It Girl series?

38) What is the name of Starr’s father in The Hate U Give?

39) The Fault In Our Stars takes its title from which Shakespearean play?

40) The Divergent book series is set in a post-apocalyptic version of which American city?

41) Name the four sisters from Little Women in age order.

42) What year was Of Mice and Men published in?

43) Who starred as the lead in the adaptation of Toni Morrison’s Pulitzer-winning novel, Beloved?

44) The Adventures of Huckleberry Finn begins in the fictional town of St. Petersburg, Missouri. What real town was this based on?

45) The events of Joseph Heller’s Catch-22 are set on which Italian island?

46) Edith Wharton became the first woman to win the Pulitzer Prize with which book?

47) What does “Who is John Galt?” mean in Atlas Shrugged?

48) What is the name of the factory the narrator works at in Ralph Ellison’s Invisible Man?

49) To Kill A Mockingbird is set in what fictional town?

50) What classic American novel includes this line: “Nothing behind me, everything ahead of me, as is ever so on the road.”

9) The Room of Requirement / The Come and Go Room

10) A bottle of Felix Felicis

14) A golden lion on a background of crimson

16) In childbirth with Tyrion Lannister

26) Out getting ice cream

31) The last day of seventh grade

46) The Age of Innocence

50) On the Road by Jack Kerouac