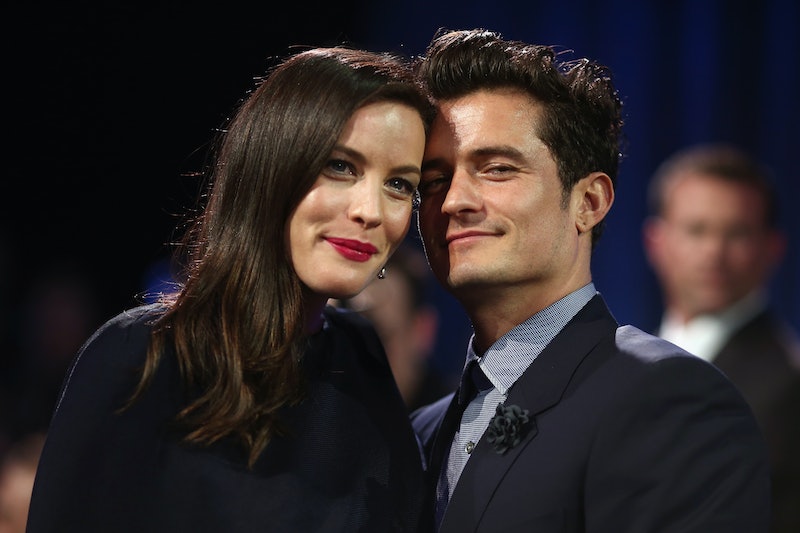 There's nothing better than when actors from a TV series or film reunite. Recently, a mini-Lord of the Rings reunion happened and it will make fans so happy. Liv Tyler and Orlando Bloom had a LOTR reunion, which Bloom was kind enough to share on Instagram on Wednesday. They took the cutest photo ever, but, really, it's his caption that deserves a round of applause.

Next to a picture of the actors with their heads together and Bloom holding his adorable puppy, he perfectly wrote,

"just a pair of elves [elves emojis] n a pup"

As fans of the movies based on J.R.R. Tolkein's books know, both Tyler and Bloom played elves in the films. Tyler portrayed Arwen. Not only did she look stunning as an elf, but she was not to be messed with. Remember that scene where Arwen saved Frodo and rode her horse all the way back home to her village of Rivendell? It was a nail biter. Of course, many fans also rooted for Arwen's romance with Aragorn (Viggo Mortensen).

Then, there is Bloom, who played Legolas. He also sported a blonde wig for the role, which made him even more attractive than he already is. (Come on, you know you liked him as a blonde, and maybe even better than him with dark hair.) Oh, and when he shot his bow and arrow? He nailed it every time. And how could anyone ever forget Legolas' boss shield move at the Battle of Helm's Deep in The Two Towers?

According to Entertainment Weekly, Tyler showed up to Bloom's London play, Killer Joe, this week. Based on the image, it looks like she's holding up a program from the production. How sweet is it Tyler supported her former co-star and friend? It's nice to see they haven't lost touch since their days playing elves.

During a July appearance on Watch What Happens Live With Andy Cohen, Tyler opened up about Bloom and whether or not they ever dated. She also revealed how close of friends they are to this day. "No. Never ever ever," she said about if they were ever a couple. "He's one of my oldest friends. Obviously, we grew up together and we're in Lord of the Rings together, but, no, we never dated." She later added about her relationship status at the time, "I was with Royston [Langdon], my first husband and madly in love with him, so I wasn't on the market. But, no, I've never gone out with Orlando."

They really were so young when they started filming LOTR, like Tyler explained to Andy Cohen. "We were like 21 or something when we started filming," she said. Filming for the first movie, The Fellowship of the Ring, began in 1999 (it came out in 2001) putting both Tyler and Bloom in their early 20s when production commenced.

They are now 41, which means they've known each other for almost 20 years. That's a long time to have someone in your life and the fact that Tyler went to see Bloom's performance speaks to the kind of friendship they have today.

OK, who else wants to go watch LOTR now?