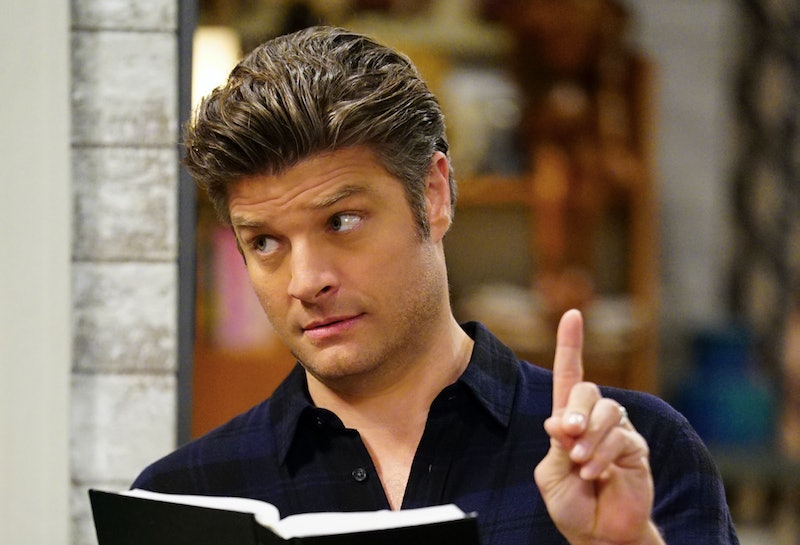 Some news: Religion has been canceled. Well, at least the CBS version of a guy living by all the rules in the Bible has been likely been canceled. The odds of Living Biblically returning for Season 2 are very slim considering that the network pulled the show from its Monday timeslot in mid-April, per Deadline. It was instead replaced by the Big Bang Theory, which is essentially CBS saying, "Hi, we're replacing this super low ratings show with our highest rated show because we need to make up for lost time."

According to TV Series Finale, Living Biblically was down from five million viewers to three million when it was yanked from the air. It was eventually returned three months later, this time burning off two episodes a night in a Saturday timeslot, effectively signaling the death of the show. Since then, it's dipped down to a little more than a million viewers per week. While CBS hasn't officially said the word, it's all but canceled at this point. Then again, the network could come around and surprise us all with a renewal in the coming months.

The show is a years-in-the-making adaptation of best-selling author A.J. Jacobs' book, The Year of Living Biblically, where he really did live by all the Bible's rules — like stoning adulterers, not wearing mixed fibers, not touching people on their their periods, and more. (Don't worry, he just gently lobbed pebbles at people he was stoning.) But Jacobs' real-life experiment seemingly didn't translate well enough to TV, where The Hollywood Reporter critics blasted the sitcom for its apparent inability "to follow the sitcom commandment, 'Thou shall make us laugh.'"

If you were a fan of the series, and you're sad to see it (probably) get officially cancelled any day now, there's still plenty of Jacobs' content for you. The book version of the show is really smart and funny and interesting. But, living by the Bible is not even the only experiment Jacobs has taken on.

He also wrote a book (my genuine favorite book of all the books ever written) about reading the encyclopedia from A-Z. It's called The Know-It-All, and it's hilarious. Also, it will give you a lot of knowledge about random things, and who doesn't love some good party facts? For example, the ridges on quarters were added when they were still made out of silver to discourage thieves from shaving off the sides. Also, strawberries and raspberries and blackberries aren't berries, but bananas are. See what I mean?

Jacobs also penned My Life as an Experiment, where he took on a bunch of smaller challenges like "radical honesty" and impersonating a movie star. In Drop Dead Healthy, he tries all the weirdest workout fads like finger fitness, strollercizing, and extreme chewing. In his latest book, It's All Relative, Jacobs put the six degrees of Kevin Bacon to the test. He seeks out information about his relatives (eighth cousins, great-great-great-great grandfathers, and all) across the globe, and, along the way, shows how we're more connected than we think.

So, while the future doesn't look bright for Living Biblically Season 2, at least fans can head to the (probably much funnier) source material and keep the story going long after the CBS show's final episode. It's not a bad deal at all.

More like this
Kathy Hilton May Not Return To 'RHOBH' — At Least Not Full Time
By Jake Viswanath
Nicola Coughlan Shared A Lady Whistledown Excerpt From ‘Bridgerton’ Season 3
By Grace Wehniainen, Alyssa Lapid and Sam Ramsden
'Elite' Season 6 Is Arriving Sooner Than You Think
By Gretchen Smail and Grace Wehniainen
The 'Reasonable Doubt' Cast Includes A 'Save The Last Dance' Reunion
By Grace Wehniainen
Get Even More From Bustle — Sign Up For The Newsletter