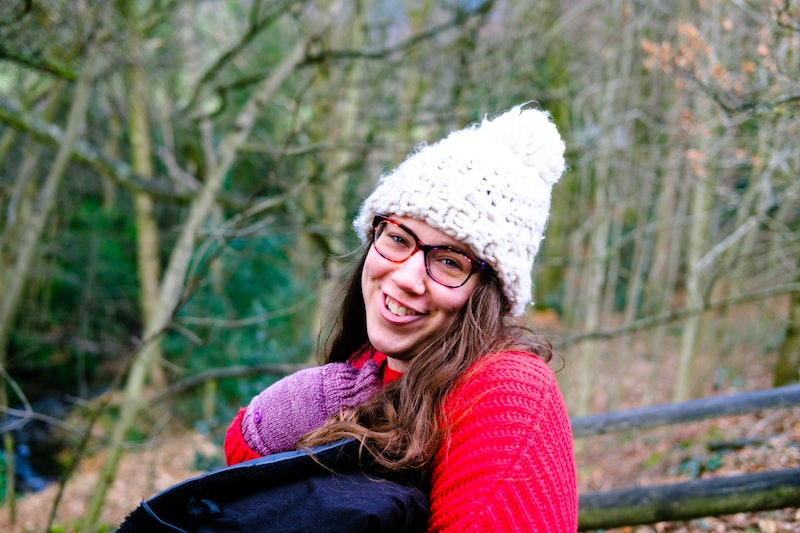 Every day, I drag myself out of bed and go to open my front door to start my commute. Living with multiple chronic illnesses, though, I’m afraid of triggering my joint pain by walking the 10 minutes to the tube station — and this fear makes it impossible to turn the lock. I slide to the floor and resign myself to another day of isolation, with no company but my chronic pain.

After living in London for four years with chronic illnesses, this battle was my daily routine. A face-off with a door may seem ridiculous, but when you’ve fallen down flights of stairs, nearly passed out on trains, and had panic attacks all over the place as a result of your chronic illnesses, leaving the house can be terrifying.

My health went downhill at age 14, when I started experiencing widespread chronic pain. At 15, I was diagnosed with a rare soft tissue disease called scleroderma, which attacks the connective tissues throughout the body, causing scarring and skin thickening. In the following years, I was also diagnosed with hypermobility, irritable bowel syndrome, polycystic ovarian syndrome (PCOS), and fibromyalgia. I am also one of four million people in Britain living with a mental health condition alongside a long-term medical condition: I have depression, anxiety, and post-traumatic stress disorder (PTSD).

I had always wanted to become a foreign correspondent, and immediately following my diagnoses, I didn’t think that dream would be compromised. But I was badly educated about my conditions and had no idea that my symptoms would get worse, not better. Moving to London from Birmingham to complete a Masters degree in journalism changed everything for the worse. I left four years later to save my physical and mental health from complete destruction.

During my first year in London, I struggled to maintain a hectic schedule. My health deteriorated as my body struggled to keep up with the stress of the city and the manic pace of life. When my course finished, I gave up my lifelong dream of becoming a foreign correspondent. I realized that traipsing around war zones with chronic illnesses would be impossible for me. Instead, I found a job in London as a video producer, but my first job had a 90-minute commute, which took my health from manageable to impossible. Trying to ignore the harsh realities of my health, I pushed through for months before a collapse at home convinced me to move.

I tried to give London a second chance by moving to central London, which would shorten my commute, but that turned my life upside down. For the first time in my life, I wasn’t living with best friends or family, and I struggled to manage my health alongside full-time work. I gradually lost more dexterity in my hands, my joints got worse by the day, and the nerve pain was unbearable. I would collapse straight into bed after work without any energy to eat. During the weeks that I couldn’t get into the office at all, I’d go days without eating because I lacked the energy to even pick up a frying pan. The longer I stayed away from work, the harder it was to return. In time, the increasing isolation of my condition wore me down and my mental health took a significant downturn.

The longer I lived in the city, the worse I became.

I started working from home two days a week, but this made me feel more isolated. Starved for human interaction, I receded further into my head and accepted loneliness as a part of my life. I was terrified of making my symptoms worse, so I deliberately isolated myself at home in a distorted attempt at self-preservation. While a logical brain would have told me that this plan was flawed, in my fragile mental state I thought that staying home — and not triggering my symptoms by leaving the house — would slow down my condition’s progression.

The lack of fully accessible tube stations also took its toll. Accessibility is considered a right under the Equality Act of 2010, but only 70 stations out of 270 in London are somewhat accessible. Although many stations are signposted as accessible, not all of them have step-free entrance throughout the station. I would get the lift to the bottom floor and find that I still had to use the stairs to get down to the platform, or I would find the escalators were out of order. Over time, forcing my creaking joints to use these stations to travel around London significantly reduced my mobility.

The longer I lived in the city, the worse I became. I had to take two leaves of absence from my job, but I never got a reprieve from my symptoms. I lost even more dexterity in my hands, my mobility was drastically reduced, and the pain was out of control. Furthermore, thanks to PTSD, I was constantly in either fight or flight mode, or so emotionally detached that I could barely crack a smile.

The intense isolation and deterioration of my health gave way to suicidal ideation. I thought that my life wasn’t worth living while in constant pain and with limited mobility. It took my partner saying, “London is killing you,” for me to realize that it wasn’t my health tearing me apart — it was the city.

Within a month, I took medical leave from my job and moved back to Birmingham with my partner. As soon as I left the smog-filled nightmare of London, I felt the weight of the city leave me. Birmingham felt like a paradise in comparison to the bleak capital. More public transport is accessible, and the friendly atmosphere was a breath of fresh air after living in London. I felt free.

Leaving London was one of the scariest things I’ve ever done. I thought moving away from the capital would end my career but it didn’t; it refreshed it. I now work freelance so that I can work around my health problems, and I have an invaluable support system, too. Even though I was lucky enough to have a career that facilitates working my own hours and a support system that helped me manage the costs of moving, not everyone with a disability is so lucky. In New York City, for example, only a third of people with difficulty walking live close to an accessible subway station, The New York Times reported, and less than a quarter of the transit system is wheelchair-accessible. For disabled people still living in inaccessible cities, it’s crucial for non-disabled people to make accessibility a priority. Access is a legal right, but too often, cities treat it like a luxury.

The move back to Birmingham had a positive effect on my mental health and brought me out of the dark cloud I’d been living in. A new start mentally gradually improved my physical health, too, and now I can manage my conditions more effectively. The overwhelming stress of London broke me down, but leaving the city for good has woken me up. Although I will never regret the lessons I learned living in London, I know that leaving saved my life.