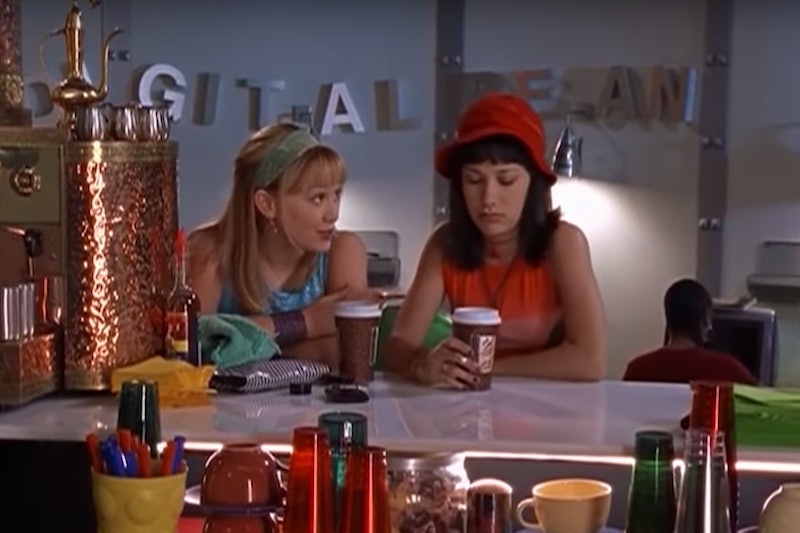 If you were a child of the '90s, odds are you watched Lizzie McGuire. The Disney Channel original series starred Hilary Duff as Lizzie, a teenage girl who was just trying to survive middle school with her two BFFs by her side. And it turns out that one of those BFFs, Miranda Sanchez, wasn't just struggling on screen, but off screen as well. In a recent Instagram post, actor Lalaine Vergara-Paras revealed she felt "forced" to look white instead of Filipina in her early acting days, adding a whole new dimension to the beloved character.

Vergara-Paras played Miranda, credited as Lalaine, for two seasons of the series. And, though Miranda's ethnic identity was not a huge part of the plot, she was, according to E! Online, identified multiple times as Mexican. Fans might remember that Miranda's family went on a trip to Mexico, a plot line that was used to explain her absence from the show and subsequent movie. (In actuality, she was working on a singing career.)

In an Instagram post shared on Tuesday, April 10, the actor posted a photo of herself and reflected on her experience in Hollywood as Filipina. "Most of my life growing up I was forced to look as 'white' as possible," she wrote in the caption. "These days I struggle to find photos where I look as ethnic as possible. Like in this photo, the most East Asian I've ever looked." She continued, explaining why she shared this photo. "In order to see, for most people, you have to zoom in on ma face," she wrote. "And in case you still don’t understand, I love my face in this photo."

In the comments, as reported by E! News, Clayton Snyder who played the cutest-guy-in-school Ethan Craft on Lizzie McGuire, recalled a conversation they had over a decade ago while filming the show. "You were the first person to open my eyes to the role of race in casting, when I asked why you didn’t use your last name," he wrote. "Said it was too Hispanic. Made me sad." She responded, writing, "i'm being genuine when I say.. You get it white boy 😏."

Though she may not have been able to portray her own ethnic identity on screen when she was on the Disney Channel, the actor did enjoy her time working on Lizzie McGuire. In an interview with The Huffington Post in 2015, Vergara-Paras said that she felt good about being a part of something that impacted so many. "I was lucky enough to be a part of something that touched a lot of kids and teens that were going through their lives and their awkward stages, and felt a little better doing it with us," she said. "The fact that I was help for a good amount of girls, that means something. It’s a lot of responsibility."

These days, Vergara-Paras is still working in Hollywood. According to E!, she's continued to pursue careers as a singer, musician, and actor. Her Instagram features many photos of her performing, as well as some nice throwbacks to her Disney Channel days. Hopefully as her career continues, she won't feel pressure to be "forced" to look any certain way.

More like this
The First Trailer For 'That '90s Show' Includes So Many Nods To The Original Series
By Jack Irvin, Alyssa Lapid and Grace Wehniainen
'Bridgerton' S3 Teases Exciting Social Season For Penelope Featherington
By Bustle
The 'Ugly Betty' Cast Just Reunited In The Best Way
By Sam Ramsden
These ‘Love Actually’ Plotlines Are “Out Of Date,” According To Director Richard Curtis
By Grace Wehniainen
Get Even More From Bustle — Sign Up For The Newsletter