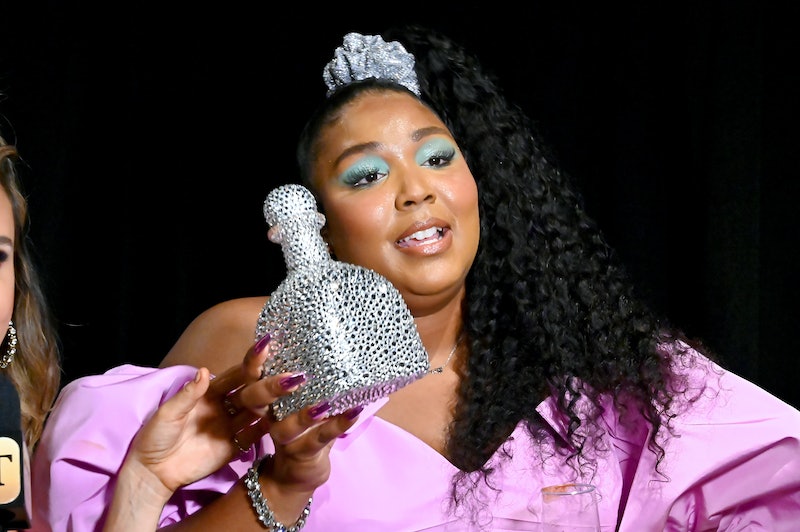 Lizzo is prone to dominate in fashion and beauty when it comes to red carpet awards, and often has multiple costume changes. And the MTV Video Music Awards were no different. Lizzo's 2019 MTV VMA audience outfit was a throwback dream, in more ways than one. While Lizzo had many appearances — from the red carpet to her 'Truth Hurts' and 'Good as Hell' performance — it was her audience look that caught people's attention. Lizzo wore an '80s prom outfit, and it will make you rethink puffy sleeves.

While in the audience, the camera panned to the "Juice" singer, and she was seen wearing a very different dress than she came in. While on the red carpet, Lizzo wore a red sequined Moschino dress with the word "siren" stamped in a repeating pattern across its length. She accented the look with a red feather boa, and wore her hair in a teased beehive with bangs. The entire look had definite Dream Girls vibe and was heavy in '70s glamour. Especially when you see the photos of Lizzo having fun with the boa and whipping it around the red carpet.

But once she was in the audience, Lizzo moved from the '70s to the '80s and donned a lilac prom dress. The '80s gown had a voluminous skirt and was accented with an off-the-shoulder neckline.

The short sleeves of the dress were puffy, just like the prom dresses in that era. To compliment the crisp lavender color of the gown, Lizzo had contrasting bright green eyeshadow on.

Lizzo's hair cinched the look, where this time around she ditched the flirty beehive in favor of a slicked-back high ponytail. The pony hung to the side and was accented with a silver velvet scrunchie. As for accessories, Lizzo accented the outfit with long tassel earrings decked out in diamonds.

But the earrings weren't the only sparkly part of Lizzo's look. The singer also carried a massive crystal-encrusted Patron bottle, which is just as good as any clutch if we're being honest.

The '80s transformation isn't a surprise for those who have seen the "Juice" music video. Parts of the video have Lizzo going back to the '80s, so this VMA audience outfit pays homage to that. In her music video, Lizzo is seen working out in a bright pink leotard and purple capri leggings. The entire outfit is cinched in the middle with a wide belt. Her hair is done the same way as in the VMAs, and is pulled back into a high ponytail. It's accented with not one but three pink scrunchies.

When it comes to fashion, Lizzo is the queen of fun looks. During her 'Truth Hurts' and 'Good as Hell' performance, Lizzo donned a patchwork trench coat, which featured khaki and white panels. One of the sleeves and a part of the collar was hot pink for a pop of fun. Then to add a touch of interest, the sides had crisscross lacing.