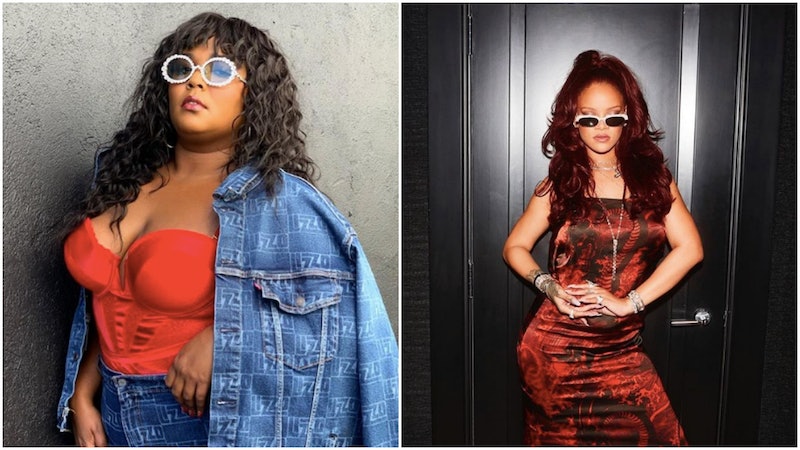 There’s something special about watching two of your faves publicly support each other — especially when those two faves are Rihanna and Lizzo. Rihanna shouted out Lizzo for wearing Savage X Fenty on her ELLE cover, and Lizzo’s response is secretly how a lot of people would feel after receiving praise from Queen RiRi.

Shortly after ELLE unveiled its Women In Music issue for October —which features Lizzo, Billie Eilish, and Camilla Cabello on three covers — all of the praise came piling in, even from the Bajan bad gal herself. With a public nod to Lizzo on Twitter followed by a shameless plug of her next Savage X Fenty fashion show, Rihanna gave props to the “Juice” singer’s achievement.

“Strapless bra by @savagexfenty. Big up my girl @lizzo and @ELLEmagazine for the feature,” Rihanna wrote in a tweet. “Literally just saw this in the middle of prep for our show (September 20th on @PrimeVideo) made my day already!”

And Lizzo's iconic response, you ask? With a simple “I’m wet” next to an awkward face emoji. Classic and hilarious.

This is far from the first interaction between Lizzo and Rihanna that has made fans giddy. Rihanna first showed love for the "Cuz I Love You" singer at the 2019 BET Awards during Lizzo's performance of her 2017 slept on banger "Truth Hurts." The clip of RiRi getting out of her seat and jamming during the singer's performance went viral, and Rihanna became a Lizzbian like the rest of us. But the Rihanna-Lizzo fandom didn't stop there.

Lizzo had to let the world know that Rihanna is a fan, fan of her music. In an interview with ET, Lizzo spilled the beans on how Rihanna was secretly living for her 2019 VMA performance.

"She DM'd me to tell me that I performed good," Lizzo told ET. "She said I 'f*cked the stage like it was my side bitch.' Don't get mad, Rihanna, I am not trying to blow up your spot, but that was a hard-ass line! I might take that line."

For those who want to cop Lizzo's Savage X Fenty bra, you still can. The strapless bra is offered in both straight and plus sizes 32A to 42DD for $56.

If you need more color options for this strapless bra, you're in luck as it's also available in Brown Sugar Nude, Honey Butter Nude, and Tobacco Nude.

In Lizzo's ELLE interview, she shared some of the insecurities she had growing up related to style and body positivity, making her cover even more poignant.

Lizzo is being the change she wants to see in the worldm while Rihanna is supporting that change. Ladies stanning ladies. Can you even?