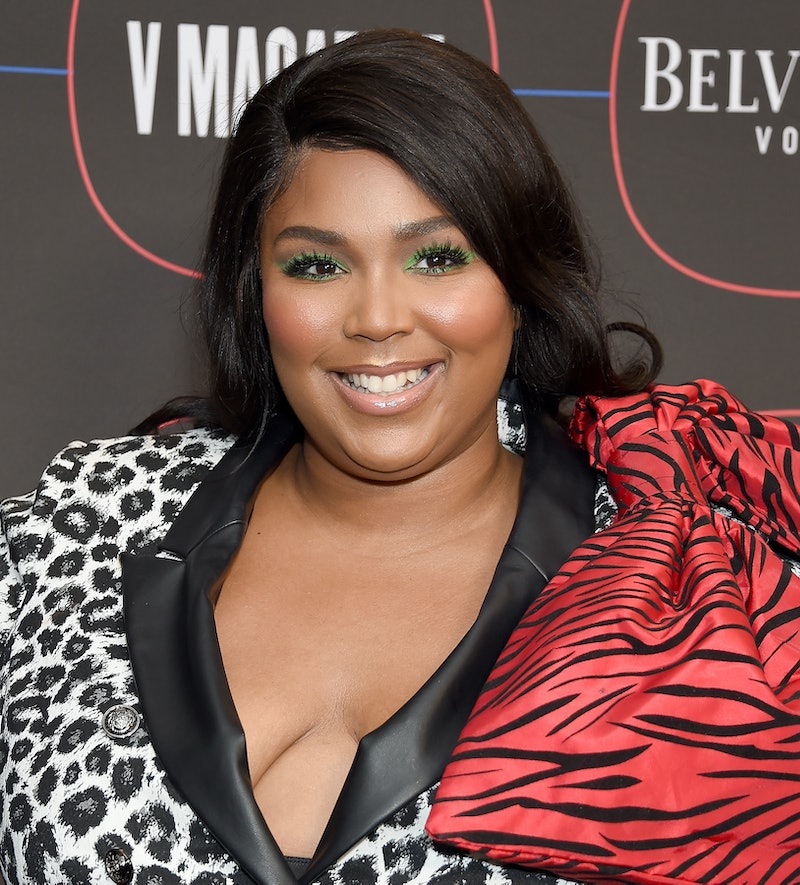 The latest viral challenge has a new contender — and well, she's made the most honest attempt yet. On Monday, July 8, Lizzo shared a Bottle Cap Challenge video on Instagram, and her post might just be the most realistic of them all. Participants are supposed to get the top off of a bottle without using their hands, and plenty of celebrities have been joining in the fun.

Lizzo went with a classic approach to the challenge and attempted to kick the cap off of a water bottle, and the results were honestly relatable. Her first roundhouse kick missed the bottle entirely. Then, her next kick, which was in slow motion, accidentally sent the bottle flying and got water on her friend's computer.

In addition to the hilarious video, Lizzo also included a funny caption about how unrealistic other people's attempts at the challenge must be. She wrote, "Y’all muthaf*ckas ain’t really knockin that bottle cap off the bottle b*tch!!!" It certainly seems like knocking the cap off the top of the bottle might be more difficult than some celebrities have let on, and Lizzo's take on the challenge might be the most real Bottle Cap Challenge to date.

The Bottle Cap Challenge was created by Taekwondo fighter Farabi Davletchin in June, according to BBC. However, UFC Featherweight champion Max Holloway was among the first notable people to take on the challenge. Holloway challenged John Mayer and actor Jason Statham, and both stars posted their submission to the challenge on Instagram, as per CNN, and soon the trend went viral.

Many celebs have continued to attempt the challenge in the past couple of days. On Sunday, Justin Bieber posted his Bottle Cap Challenge on Instagram, writing, "I nominate Tom cruise and Hailey Bieber." Hailey Baldwin took up the challenge on Instagram as well, using a four-wheeler to drive by the bottle and knock off the cap. Ellie Goulding, Diplo, and Blake Shelton are also among the stars who have joined in.

Of course, Lizzo isn't the only star to take a funny approach. On Sunday, Mariah Carey tweeted her own #BottleTopChallenge on Twitter, in which she sang the cap off of a wine bottle using a high note. She captioned the video, "Challenge accepted!"

Ryan Reynolds submission to the Bottle Cap Challenge on YouTube also had some technical difficulties. The Deadpool actor attempted to kick the cap off a glass bottle, sending the whole thing smashing into the wall.

Lizzo's Bottle Cap Challenge may not have been the most successful, but it was certainly the most relatable. Fans appreciated the star for keeping it real. Other celebrities seem to be making the challenge look way too easy. It's unclear how much more popular the #BottleCapChallenge will get online, but Lizzo's submission will definitely be among the funniest.