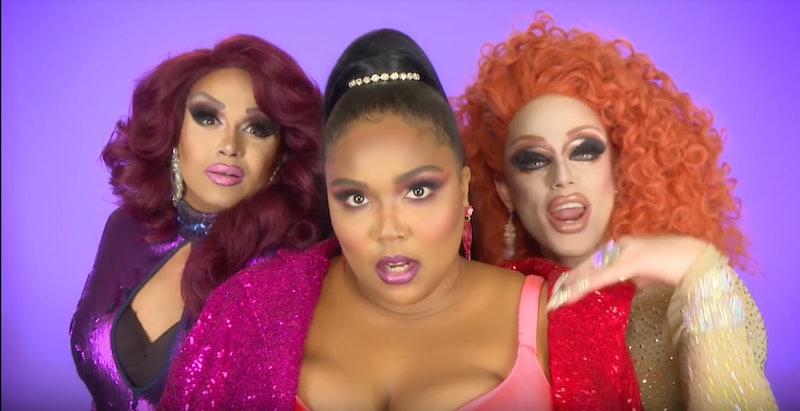 Lizzo has an uncanny ability to make everyone who listens to her feel the confidence of a true queen — no matter their gender, race, or sexuality — mainly because she makes it known that she is a queen and treats herself like one. So it was only a matter of time before she made a video with some actual queens — drag queens, that is. Lizzo created a new video for “Juice” featuring RuPaul’s Drag Race stars, because one video for such a juicy song is simply not enough. And if this video doesn't make you want to be fanned by a servant, juice in hand, like a genuine queen, nothing will.

Unlike the first clip for “Juice”, which featured glossy tributes to retro TV formats, including a kitschy talk show, an ‘80s aerobics workout video, and an infomercial, the new “Juice” video has a relatively simple concept: make some fruit juice. Lizzo joins the Drag Race queens as they lip-sync for their life against brightly colored backdrops and juice some good, healthy fruit. Well, sort of. They attempt to make some actual juice, but instead, they just pour some vodka over the fruit and have themselves a fun party. Relatable.

The many queens in the video include A’keira Davenport, Asia O’Hara, Detox, Mariah Balenciaga, Mayhem Miller, Morgan McMichaels, Silky Nutmeg Ganache, Soju, and Sonique. And while there's no appearance from RuPaul, it's safe to say this would be approved by the ultimate drag mother. The new video was produced by World of Wonder, the production company that helmed RuPaul’s beloved competition show, and released on their YouTube channel.

Other highlights of the clip include a fake Instagram account, which gives Lizzo the 998 million followers that she deserves (but literally nobody on this Earth has), and a slightly NSFW but hilarious moment involving some bananas. Lizzo’s face of shock says it all. “I TRIED TO DEEP THROAT A BANANA AND ALL I GOT WAS THIS LOUSY MUSIC VIDEO!,” she wrote on Twitter while sharing the new video.

For double the juiciness, Lizzo and the Drag Race queens also put out a joyous blooper reel which is filled with nothing but shady comments and wig mishaps. We'd expect nothing less.

The new "Juice" video is a natural step for Lizzo considering that she served as a guest judge on RuPaul's Drag Race last year. "To work with RuPaul is a dream," she told Rolling Stone in July of 2018. "It was a bucket list [item]. I’m very fortunate to have been in the same room as RuPaul. You learn so much just by watching the way RuPaul operates. Apparently there are some petitions for me to be a permanent judge."

The clip is also just the latest achievement in what has already been a huge year for Lizzo. The breakout star is releasing her debut full-length album, Cuz I Love You, tomorrow, April 19, and will embark on a headlining tour for the record after making her Coachella debut on Sunday, April 14. She's feeling good as hell, and lucky for fans everywhere, she's sharing that feeling with everyone.