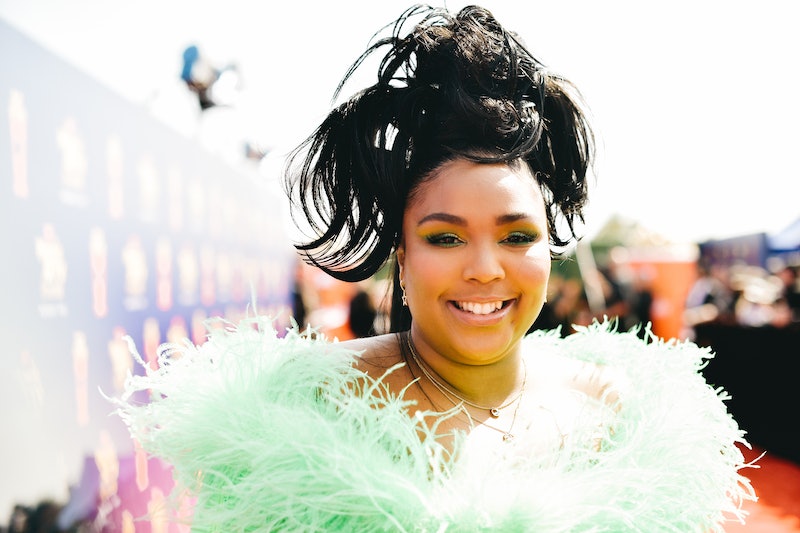 Have you heard Lizzo's song "Boys"? It's pretty great. The subject of the track is — surprise — boys, and in the second verse, she describes the kinds of boys she likes. Bottom line: She doesn't discriminate. Well, a few fans turned that second verse into a meme, and Lizzo recently reacted to the viral "Boys" threads floating around. So, what did she think, you wonder? She loved them. A lot. Like, a lot a lot. And can you blame her? They're both hilarious *and* creative.

So, the first "Boys" thread that the rapper acknowledged on Twitter was all about lizards. Yes, lizards. If you're confused about how reptiles and her track are related, well, it's actually pretty simple. It's all about the lyrics.

The lyrics of the second verse read,

"I like big boys, itty bitty boys / Mississippi boys, inner city boys / I like the pretty boys with the bow tie / Get your nails did, let it blow dry / I like a big beard, I like a clean face / I don't discriminate, come and get a taste / From the playboys to the gay boys / Go and slay, boys, you my fave boys."

For every "I like" in the song, Twitter user @price_zach posted a photo of a lizard that matched Lizzo's descriptions. So, for example, with, "I like big boys," he shared a pic of a very large lizard. Get it? Got it? Good.

"OMG THREAD ALERT," Lizzo wrote in response, followed by six crying-like-"this is so great" emojis. "AND MAKE MORE OF THESE PLEASE," she added.

Well, the next day, Lizzo got what she wished for. "Boys" got yet another animal treatment from Twitter user @builtsides — this time, with dogs. "OMG THREAD ALERT," she commented on the thread, followed by 13 crying-like-"this is so great" emojis. Was it worthy of all 13 emojis? You bet.

When asked about the meaning behind the song during an interview with Out earlier this month, Lizzo explained,

"From this black girl to the world, I want you to identify with my story no matter what you like in yo’ holes. I want people to feel free, I want people to have fun, I want these boys to know that you could be my next victim… if you play your cards right."

So, yeah. It's safe to say that people are definitely identifying with her story, and they're undoubtedly having a whole lot of fun with the lyrics. Maybe not the kind of fun she originally had in mind, but they're having tons of fun, nonetheless.

In terms of what's next for the viral "Boys" thread, the possibilities are endless. Cats, perhaps? Sure, why not. Hedgehogs, maybe? Yeah, that'll work. What about hamsters? Fish? Mountain lions? Orangoutangs?Teacup pigs? Yep, yep, yep, yep, and yep. All of those will work nicely. Can someone get to work on the teacup pig one ASAP, though? Thanks.

Hey, if you play your cards right, maybe you too could earn yourself a retweet and response from Lizzo herself. Good luck and godspeed, people of Twitter.