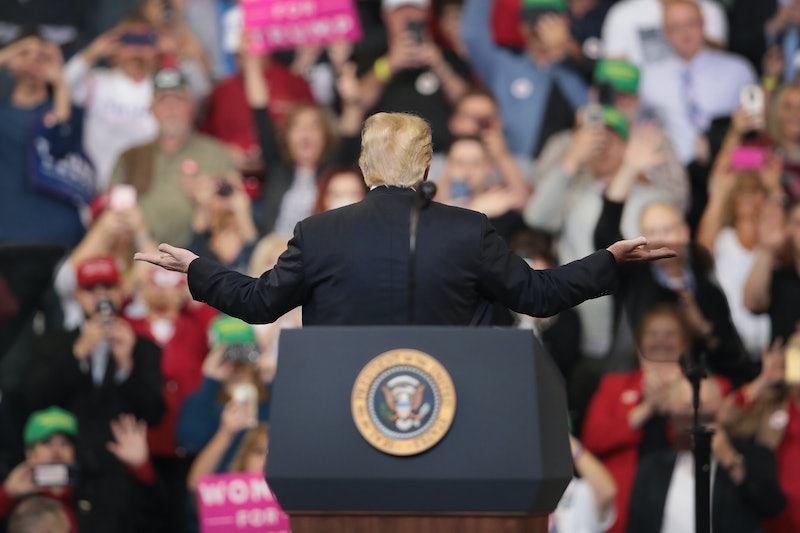 During a Trump rally where the president said Democrats are "too dangerous" to govern and have become a "left wing mob," his supporters chanted "lock her up" about a woman politician — except this time it was not just for Hillary Clinton. "Lock her up!" chants targeted Sen. Dianne Feinstein, too, at the first rally following Justice Brett Kavanaugh's confirmation.

President Donald Trump was in Council Bluffs, Iowa, and during the campaign rally he attacked a number of Democrats by name including Sens. Cory Booker and Elizabeth Warren. Then he turned to Feinstein.

"How about Sen. Feinstein? That’s another beauty," Trump said and the crowd began to boo. "'Did you leak the documents?'" Trump said, immitating Senate Republicans. He then pretended to deny the leak as Feinstein, acting nervous and erratic, and turning back to ask the crowd as if it were staff, as the senator did during the Senate Judiciary Committee hearing.

Then started the chants. "Lock her up! Lock her up!" the crowd screamed before Trump cut in and said, "I think they're talking about Feinstein. Can you believe it?"

In a statement to The Hill, Feinstein called the comments "ridiculous and an embarrassment." The senator's statement continued, "Dr. Blasey Ford knows I kept her confidence, she and her lawyers said so repeatedly. Republican senators admit it. Even the reporter who broke the story said it wasn’t me or my staff."

Some on Twitter pointed out the irony, given that many Kavanaugh supporters had called for due process during the confirmation hearings after the judge was accused of sexual assault (Kavanaugh denies the allegations).

"Oh hey look it’s the same people screaming about due process for Kavanaugh chanting 'lock her up' at a Trump rally,'" writer Bridget Phetasy said on Twitter.

"All these neutered Republican male senators like @JohnCornyn and House’s @SteveScalise have been whining all week about threats to civility," wrote activist Amy Siskind. "Then Trump in Iowa tonight leads chants of 'Lock Her Up' about their colleague Sen. Feinstein, and not even a whimper."

"Trump's Iowa rally chanted 'lock her up'... about Dianne Feinstein," wrote activist Adam Best. "It's not even just Hillary anymore. Now the MAGA hats want to imprison any woman politician they dislike. Trump supporters might not be better than this, but America is. Vote accordingly."

Trump made some very extreme comments about the Democrats in his speech overall. "The Democrats have become too extreme and they’ve become, frankly, too dangerous to govern. They've gone wacko," he told the crowd.

"If Democrats take control they will try to reverse our amazing progress and plunge our country into gridlock and maybe into poverty and ultimately into chaos," Trump continued.

Not to be forgotten, Trump supporters also went after Clinton with a "lock her up" chant when the president brought up a trade deal with South Korea that he said was a "Hillary Clinton deal."

"Lock her up" seems here to stay.