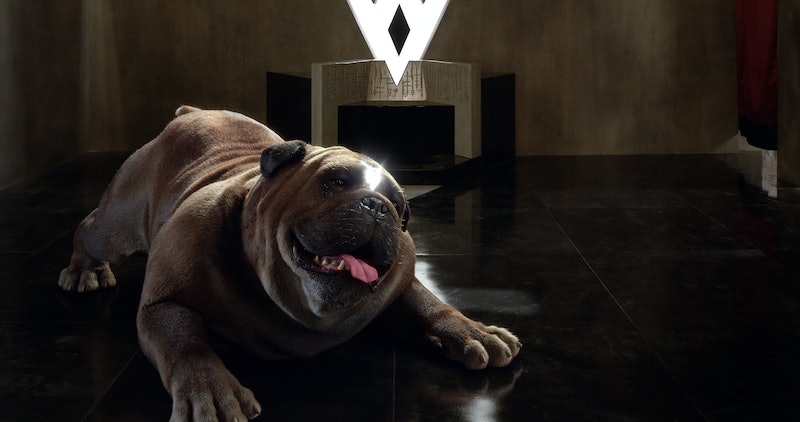 There are not too many things in this world greater than dogs, but superhero dogs might just be one of them. Lockjaw's powers on Inhumans make him one useful and friendly beast. It'll be difficult for dog people not to instantly fall in love with him in the show's Sept. 29 premiere.

So, in case you aren’t up-to-date on one of the more obscure Marvel properties, Lockjaw is the only dog member of the Inhumans. The Inhumans are an advanced offshoot of humanity that lives longer, is smarter, and was separated from humanity in the ancient past after genetic modifications from the Kree race. Inhumans can get additional unique individual powers through a process known as Terrigenesis. Weighing in at 2,000 pounds, the canine crusader Lockjaw has the power to teleport himself and others to escape danger by quickly traveling from place to place.

Crystal, played by Isabelle Cornish, is Lockjaw’s keeper on the series. Obviously then, Cornish was the actor who got to work the most with the super-powered pup. But, of course, working with an animated ally can present it’s own challenges. In an interview with That Hashtag Show, Cornish talked about the unique shooting process. She said:

"He’s completely CGI, so I had no Lockjaw on the day. Sometimes I had a stand-in stuffy, but yeah so for me it was all about building the relationship and then getting used to working with him not being there, and just knowing where to look, when to look, and how I wanted to respond to him. And then to trust, too, that when he’s in there it’s all gonna be great."

That “stuffy” she talked about was a blue life-sized model of Lockjaw that was sometimes used during filming. While it didn’t move, it certainly did help build hype for the series when it was spotted during filming in Hawaii. Reel News Hawaii was able to share some pictures of the stand-in as well.

Of course, Cornish isn’t the only one to get a chance to act with the hero doggo. Sonja Balmores, who plays Auran, told press at San Diego Comic Con all about what it was like acting against what amounts to be an inanimate object.

“I don't know if it's made out of Styrofoam or what, but it's just a statue," Balmores said. "And you're acting to a statue. It's been super rewarding to know it's coming together and it looks so good.”

The hype about the woofing wonder is exactly what Inhumans’ showrunner Scott Buck was counting on. Who couldn’t love a giant teleporting superhero bulldog? It makes sense since the English bulldog (obviously, what Lockjaw has been based upon) has seen a 323% rise in registrations, since 2003. In speaking with Entertainment Weekly, Buck said he thinks that Lockjaw will be the fan-favorite. "We certainly enjoy working with him. He’s fun to write, he’s fun to shoot," the showrunner said. "There’s not too much more detail than that that I can give, but he is going to be a standout on the show.”

With that in mind, Buck has also warned that Lockjaw probably won’t be seeing his own character-specific storylines. In an interview with Collider, when asked if Lockjaw would take over the show, Buck responded with a resounding nope. “That won’t happen. He’s a dog,” he said. “Despite the fact that he weighs 2,000 pounds and can teleport, he’s still just a dog, so his storyline is always fairly simple. We don’t try to pretend that he’s anything other than that.”

Honestly, that fact is a bit disappointing. Lockjaw is an important character in his own right. He formed the cutest superhero team ever, the Pet Avengers, a superhero team from the comics. Brought together by Lockjaw, their purpose was to find the same Infinity Stones from the live-action Avengers films. The team of super-powered pets includes Throg (the Thor frog), Hairball (a cat that can super-bounce), Lockheed (Kitty Pryde’s alien dragon), Redwing (Falcon’s pet bird), and finally, Ms. Lion (a male dog belonging to Spiderman’s Aunt May – without any special powers).

So, Lockjaw is a relatively minor character on Inhumans, but he could be as pivotal as he is cute.