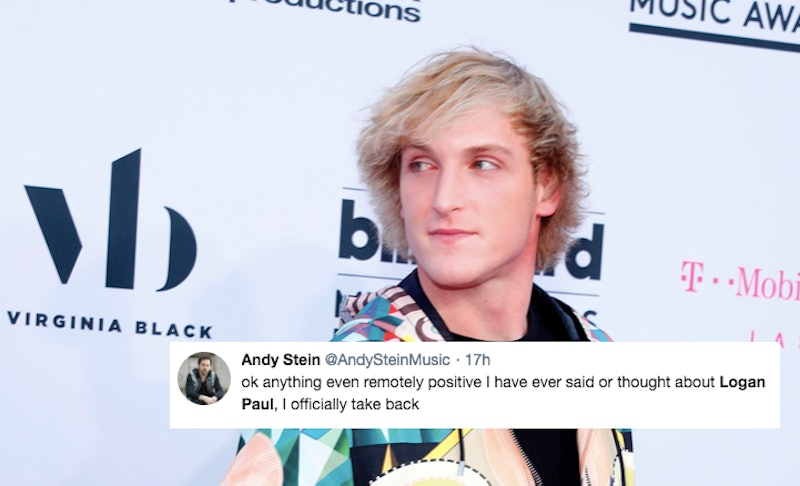 After sparking widespread outrage when he posted a video appearing to show a dead body, and subsequently taking a break from YouTube, Logan Paul has returned to daily vlogging, but the YouTuber has already garnered criticism for a new video. According to TMZ, People for the Ethical Treatment of Animals (PETA) has criticized a section of a new video, posted on Feb. 5, that appears to show Paul using a taser on two dead rats. Senior Vice President of PETA Lisa Lange called the video "repulsive." She told TMZ, "This sort of content has no place on YouTube or anywhere else, as it could desensitize young people to cruelty to animals. PETA is calling on the platform to remove it." Bustle has reached out to Paul and to YouTube for comment, and we will update this post when we hear back.

Users on Twitter are saying the video, which also contains a segment where Paul appears to take a fish out of a pond and puts it on the ground, then asks someone off-camera if he should perform CPR, shows a disrespectful attitude toward death, which was also criticized when Paul posted the footage taken in Aokigahara, the woods commonly known as the "suicide forest" at the base of Mt. Fuji in Japan,

"Why does Logan Paul think death is so funny?" one user tweeted. "Dear @LoganPaul, nobody appreciates that you think death is funny. This is literally so sick..." tweeted another.

"Dead people, now dead rats and fish... sure... growth," a YouTube user said in a comment on the video where Paul tasered the dead rats, called "THE PAULS RESPOND TO THE CSI FIGHT! **called out**." The section where the rats are tasered is marked by title cards, which read "Get These Rats."

Some question whether the YouTuber's apologies for posting his vlog filmed in Aokigahara were actually sincere.

In his video marking his return to daily vlogging, called "Logan Paul Is Back" and posted on Feb. 4, Paul, in character, argues with a voiceover that called him a "disgraced YouTuber."

"Yo, hold up, 'disgrace'?" Paul says in the video. "What you mean 'disgrace,' boy? I took a break. Besides, I'm still lit as f*ck. What other YouTuber you know can take a three-week break, and still gain a million subscribers?" Before returning to daily vlogging, Paul also uploaded a PSA-style video about suicide prevention on Jan. 24.

Paul's Dec. 31 video resulted in his planned YouTube Red film The Thinning: New World Order being put on hold, according to Polygon. Paul was also dropped from the next season of Foursome and "his new Originals are on hold," a YouTube representative told Polygon. Polygon also reported that Paul was dropped from Google's top tier preferred ad program.

As with Paul's video filmed in Aokigahara, some social media users are asking YouTube to remove the video containing "Get These Rats," and to delete Paul's channel. A Change.org petition asking for Paul's channel to be deleted has at time of publication been signed more than 550,000 times. Paul responded to the petition by tweeting:

But the Feb. 5 video is not the only reason for renewed controversy over Paul. Some users also claim that Paul is tagging his new videos with keywords including "suicide forest" and "suicide forest video." Neither of those tags currently appear on Paul's most recent videos, but page source code for a video titled "ASKING COLLEGE STUDENTS WHAT THEY THINK OF LOGAN PAUL! (in disguise)" shows it is tagged with "logan paul forest." Several different Twitter users have posted screenshots of the video tags for different Logan Paul videos, showing similar tags.

And it turns out even if viewers have been purposefully avoiding Paul videos after Dec. 31, they may have ended up seeing them anyway. Polygon reported Feb. 8 that "[f]ollowing a surge of complaints, YouTube is fixing a bug that's sending Logan Paul videos to non-subscribers."

After a user tweeted a screenshot of a Paul video being recommended, YouTube replied on Twitter, saying, "Our bad! We fixed it so that only Logan subscribers will get it going forward. Apologies for the spam!"

What Paul will do with his channel moving forward remains to be seen, but it's clear that his vlogs have continued to spark controversy across different areas of the internet.