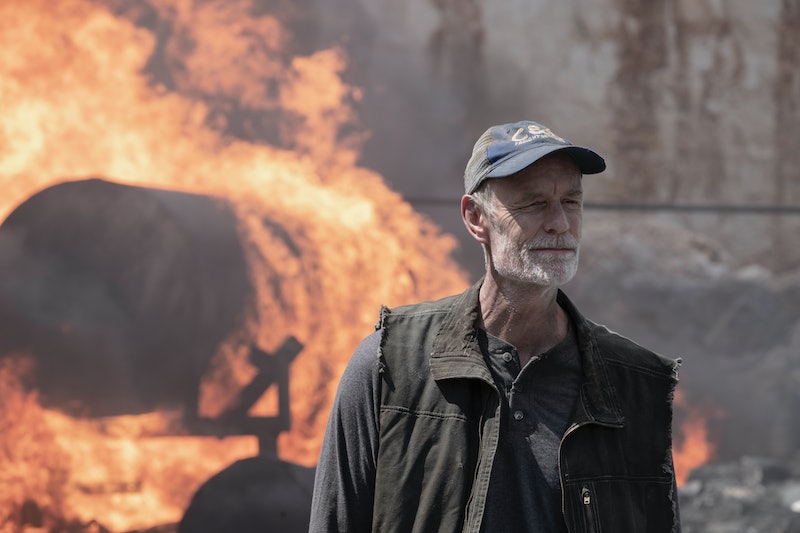 Ginny, the leader of the Pioneers, is played by Colby Minifie, who you may recognize from the first season of Jessica Jones as well as The Marvelous Mrs. Maisel. “The big secret is that there have been other civilizations that have survived the apocalypse,” revealed producer Scott Gimple at San Diego Comic-Con, where Minifie's casting was announced. “We are about to show a lot more.”

Her full name is Virginia, she rides a horse, and has really embraced a "post-apocalyptic Western chic" look. Fear characters are always so much more fashionable than the original series. It's too bad Ginny couldn't team up with Mel, the leader of the Vultures, with his floral shirt/pea coat ensembles.

Ginny and her people are looking to expand their community and settle land in their name, no matter how many people they have to kill in order to do that. She may ride like a cowgirl but she talks like a politician. "Together," Ginny tells Logan, "we can get from yesterday to tomorrow." How's that for a slogan?

The villain, or so it seems, also appeared in a flashback. She's the one who turned Logan to the dark side in the past, though in the present she took him out as soon as he was no longer useful to her cause. Ginny tells our heroes she had to kill him and his crew, claiming that Logan was untrustworthy and a liability. "We do this kind of thing for a reason and we don't do it lightly," she says.

She and her crew have been watching Alicia and Morgan's group "on and off-screen," so to speak. They made those PSAs to help people, but really just put all of their vulnerabilities on blast for everyone to see. Still, Ginny is outwardly impressed with their cause. She tries to broker a deal, but the group refuses. Rightfully so, as they just watched Ginny's previous allies get summarily executed.

Despite her grand entrance, little is known about Ginny's life before the outbreak. She's not based on a comics character either, but there are a lot of little clues to mull over and theorize about anyway. There's a pin in the shape of a key on her label, which could mean something. If you really wanna get conspiratorial, recall the Walking Dead episode titled "The Key," which introduced a group of pioneers, so to speak, lead by a woman named Georgie. They trade supplies for information on how to farm and mill — "the key to the future," according to them. Maggie ended up going with that group to help settle other communities. Could Ginny be part of that faction?

At the end of the episode, Luciana joins Ginny's crew to keep her friends from suffering the same fate as Logan and the others. She's going to cook gas for them while the convoy drives away safely. That at least means that Ginny's story on Fear The Walking Dead isn't over, and who knows where the Pioneers will be looking to plant their flag next.