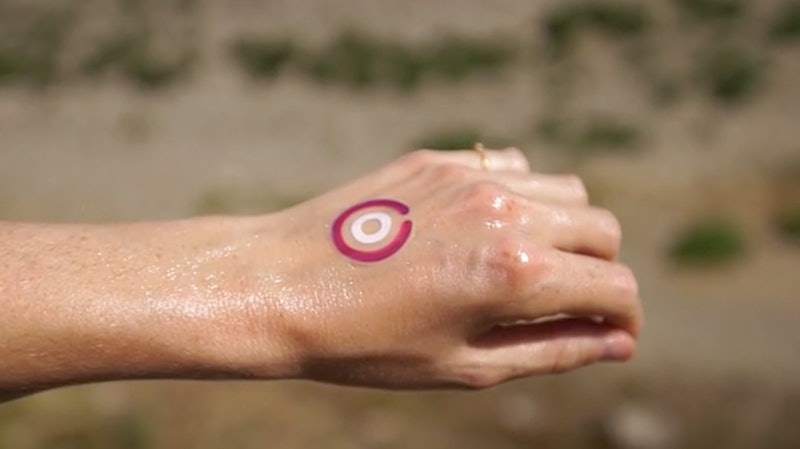 Any '90s or 2000s kid could tell you that temporary tattoos were, once upon a time, all the rage when we were growing up. Thankfully, that trend still seems to be A Thing among grown up '90s babies. But now, this childhood fave is being revamped for adults. And one Kickstarter campaign is taking a decidedly grown-up twist on the childhood classic: LogicInk’s “temporary tattoo” sensors can track everything from UV exposure levels to your alcohol consumption in real-time.

It may be hard to believe this ingenuous product can tell you much about your health — especially when it not only looks like a temporary tattoo, but it’s also applied like one. The team of researchers behind LogicInk created these wearable sensors using chemistry and biology. According to the Kickstarter Campaign page, “LogicInk senses from your sweat, skin volatiles, skin microbiome, or surrounding environment to provide live feedback.”

Simply explained, this tattoo sensor gives you instant information about your health and surroundings by transforming colors when the conditions change. For instance, the LogicInk UV tattoo — which looks like a ring nestled inside another ring — will not only tell you how much direct sun you’re getting, but also when you’re close to being sunburnt. The inside circle will change from white to purple, depending on how intensity of sunlight. Additionally, the outside circle will turn from purple to bright pink before you get burned, based on data provided by the World Health Organization (WHO). So, rather than having to guess when you need to reapply sunscreen or find some shade, LogicInk tattoos tells you in the moment when you’ve caught enough rays for the day.

LogicInk's temporary tattoos each only last a day according to the makers, but they are water resistant — making them perfect for a sunny day spent at the beach, or lounging at the pool with friends. What’s more, because of the smartphone-free design, anyone of any age can get info about their health from wearing them. All you have to do is apply the sensor to the back of your hand or arm, and remove the extra paper.

The UV exposure “tattoo” sensor is currently available for purchase on LogicInk’s website, with a starter pack of ten starting around $39, and a family pack of 30 for $79. However, awesomely enough, more designs are in the works. According to their Kickstarter page, the researchers at LogicInk are “currently developing tattoo sensors that capture and relay information about an individual’s hydration, blood alcohol concentration, exposure to pollution, and even DNA, to name a few.”

Though there’s not a set release date for these other hi-tech temporary tattoos, they are already being tested. The alcohol consumption sensor has even been validated by the National Institutes of Health (NIH), according to the Kickstarter page. Those who back the Kickstarter campaign for $79 or more will be among the first to snag these other sensors and try them before they hit shelves.

LogicInk's temporary tattoo sensors are an effective and easy way to stay on top of some of your basic health concerns in the moment — whether that be ensuring you don't get sunburnt, or keeping track of air pollution you're exposed to. Overall, the idea behind LogicInk may be straightforward, but it's cool AF. You never needed an excuse to rock a temporary tattoo, but now you can wear one that ups your wellness game.