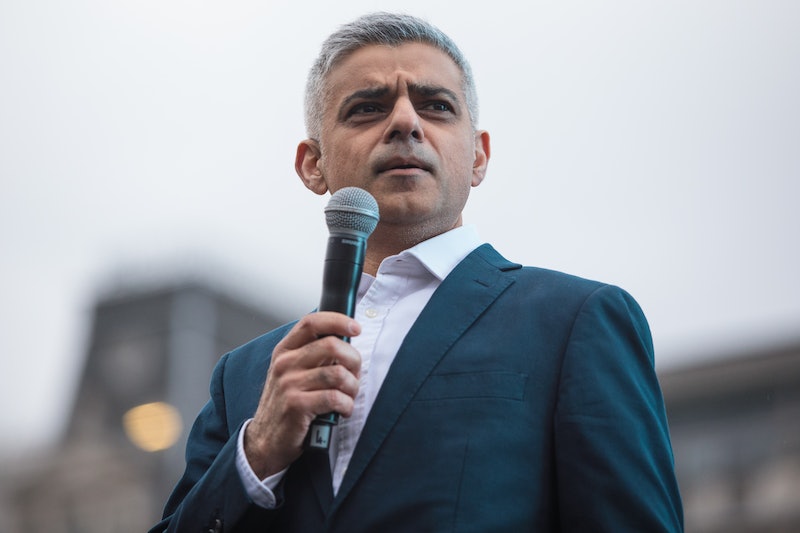 As so often happens lately, the American president posted an offensive tweet in response to a recent incident. Following the terrorist attacks on Saturday night in London, POTUS criticized the city's leader via Twitter by twisting his remarks out of context and promoting his proposed travel ban. However, Mayor Sadiq Khan proved that he had no time for anyone who wasn't trying to help the situation. The mayor of London's response to Trump's critical tweet was amazing, because it was actually no response.

In the midst of the horrific terror attacks Saturday, Khan proved that he had no time for Trump's unsupportive fear-mongering by literally not taking the time to respond. Instead, Khan issued a statement through a spokesperson, essentially telling Trump to not say anything if he can't say anything nice.

"[Khan] has more important things to do than respond to Donald Trump's ill-informed tweet that deliberately takes out of context his remarks urging Londoners not to be alarmed when they saw more police — including armed officers — on the streets," the spokesperson said.

Trump's tweet was in response to a small part of the statement that Khan made following the attacks. "Londoners will see an increased police presence today and over the course of the next few days. There's no reason to be alarmed," Khan said Saturday.

The most reasonable interpretation of Khan's statement is that Londoners have no additional reason for fear, that the imminent threat is over and just because there's more police presence doesn't mean there's any reason to suspect another attack. However, Trump appears to have taken the comment deliberately out of context to perpetuate fear in the United States.

Trump had previously tweeted his intended support for the U.K. just a few hours before this criticism of Khan. "Whatever the United States can do to help out in London and the U. K., we will be there - WE ARE WITH YOU. GOD BLESS!" Trump posted as the news of the attack was just breaking.

It's unclear whether Trump has followed through on the offer of tangible help for London and the U.K., but it seems that his position about being supportive for the people affected by the attack has already changed. Criticism and fear-mongering are the last things that the people of London need. Trump seems to be just trying to push his own narrative of isolationism and protectionism at the expense of a vulnerable city.