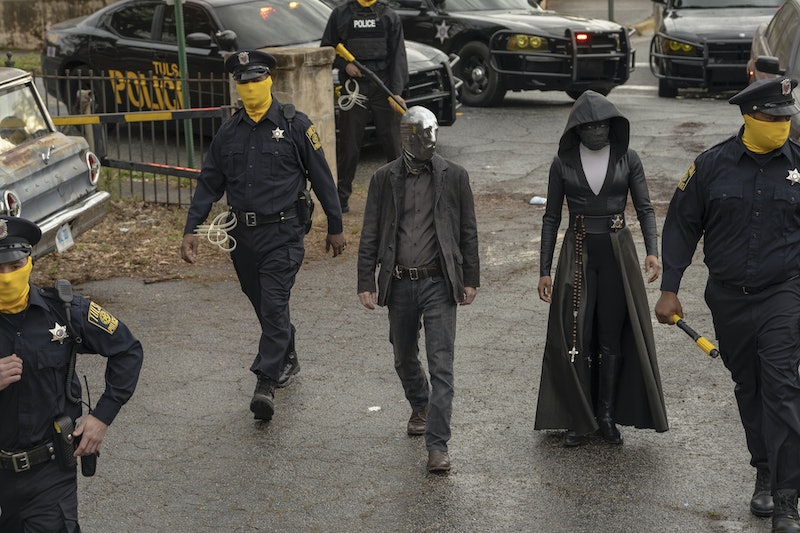 One of the coolest looking new characters in HBO's Watchmen takes inspiration from Alan Moore's graphic novel in an unexpected way. Wade, a.k.a. Looking Glass isn't in the Watchmen comic; however, the character's vigilante look seems comparable to a character who looms large over the HBO series. While the 7th Kalvalry dons Rorschach-like masks and takes the word of Moore's character as gospel on Watchmen, Looking Glass's reflective mask replicates the effects of Rorschach's ink blot visage, though their characters aren't similar at all.

The original Rorschach died at the end of the events of the Watchmen graphic novel, which takes place prior to the series. But his negative influence is immediately apparent vis a vis a terrorist organization called the "7th Kalvalry." Looking Glass and his fellow detectives Sister Night and Red Scare, are tasked with taking down the Kalvalry.

Despite the fact that a white supremacist group has appropriated his mask, Rorschach was considered a hero in the world of Watchmen and probably wouldn't approve of the Kalvalry's methods. Still, on paper, Looking Glass and Rorshach could not be more different. Wade does not apparently share Rorschach's conservative politics (so far at least) and instead works within the system as a cop, something Rorschach canonically refused to do.

It's just that the visual and philosophical similarities between the two full face masks, especially when Looking Glass reflects a Rorschach test in the pilot's interrogation scene, is hard to ignore — even if the character and those wearing Rorschach masks in 2019 Watchmen are on opposite sides. Perhaps the Kalvalry represents the darker half of Rorschach's "legacy" in the Watchmen universe, and Looking Glass could step in as a more noble successor.

In fact, Looking Glass's reflective mask actually looks like the comic book character that inspired Moore to create Rorschach in the first place: Steve Ditko's Mr. A, who wore a mask made of shiny silver metal. Whether that is a coincidence, a deep cut Watchmen Easter Egg, or a hint that Looking Glass is inspired by Rorschach somehow remains to be seen.

Fans also learn in the first episode that Wade survived Ozymandias' alien squid attack on New York City, which happens at the end of the graphic novel, so he's connected to Moore's source material in another, more direct way too. In a lengthy Instagram post, Lindelof described his Watchmen as a "remix" of Moore's source material rather than a reboot or a sequel. That's a good way of looking at new characters like Looking Glass: he's not replacing anyone, just more of a mashup of old characters and concepts with new ones.

More like this
Netflix Shut Down 'Bridgerton' S3 Rumours About A “Very Dark” Storyline
By Bustle
Rupert Grint Just Shared A *Major* Update About Ron Weasley’s Future
By El Hunt
Bill & Frank’s 'The Last Of Us' Episode Has Twitter Emotionally Wrecked
By Alyssa Lapid
Everything To Know About The 'Daisy Jones & The Six' TV Series
By Maxine Harrison and Brad Witter
Get Even More From Bustle — Sign Up For The Newsletter
From hair trends to relationship advice, our daily newsletter has everything you need to sound like a person who’s on TikTok, even if you aren’t.