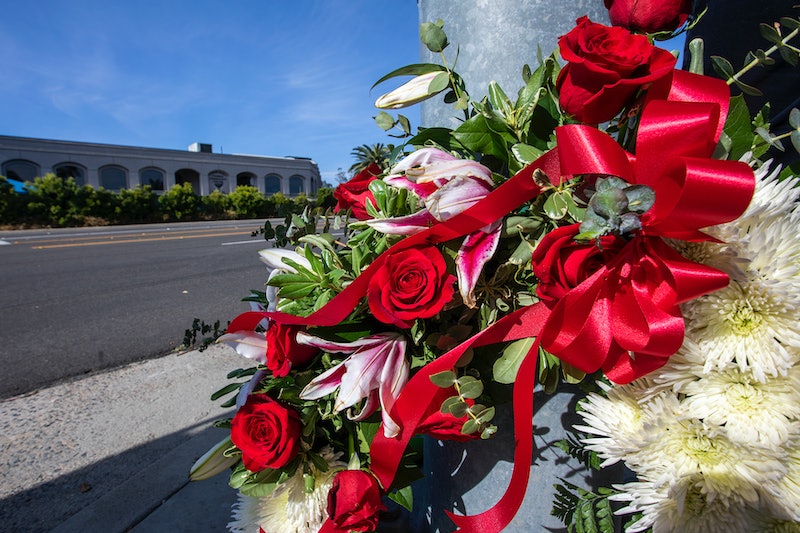 As authorities continue to investigate a shooting at a California synagogue, tributes have poured in from friends, family, and foreign governments for 60-year-old Lori Gilbert-Kaye, the Poway Synagogue shooting victim. Kaye is being remembered as a hero who sacrificed herself to protect another.

"We are deeply shaken by the loss of a true woman of valor, Lori Kaye, who lost her life solely for living as a Jew," the Associated Press reported Rabbi Yonah Fradkin, executive director of Chabad of San Diego County, said in a statement identifying Kaye and three other people who had been injured in Saturday's attack.

Witnesses told The San Diego Union-Tribune that Kaye had jumped in front of Rabbi Yisroel Goldstein when a gunmen entered Chabad of Poway synagogue and opened fire on the congregation. As a result, Goldstein sustained injuries only to his hands, the paper reported.

In an exclusive interview with TODAY host Willie Geist, Goldstein described Kaye as an activist and "a pioneering family member of" the congregation. "She's been a steadfast member, supporter, philanthropist, just a kind soul," he said of Kaye. "Everyone in the community knew her... She's such a dear friend. I've known her for 33 years and I'm just so heartbroken and saddened by this senseless killing."

According to the Jewish Press, Dr. Ronit Lev told Reshet Bet radio that Rabbi Goldstein had confirmed Kaye's heroic act in comments to her. "Our rabbi, Yisroel Goldstein, who was taken to the emergency room, told everyone that she saved his life because she stood in front of him," Lev said, according to a translation provided by the Jewish Press.

Israeli Prime Minister Benjamin Netanyahu offered his condolences to Kaye's family in a statement condemning the attack on Twitter. "We send condolences to the family of Lori Gilbert-Kaye and our best wishes for a quick recovery to the wounded," Netanyahu tweeted. "The international community must step up the struggle against antisemitism."

According to The Times of Israel, Kaye was also remembered by Israel's minister of diaspora affairs, who described her as "a Jewish heroine" in a statement. "She sacrificed her own life, throwing herself in the path of the murderer's bullets to save the life of the rabbi," the news outlet reported Naftali Bennett said. "But it is clear that such heroism and good deeds are not only characteristic of dear Lori in death, but that this was the way she lived her life — constantly doing charity and good deeds for those in need."

Indeed, in a tribute shared on social media, a friend of Kaye's described her as someone who was always doing good deeds. "Lori you were a jewel of our community a true Eshet Chayil, a Woman of Valor," Audrey Jacobs wrote in a Facebook post. "You were always running to do a mitzvah (good deed) and gave tzedaka (charity) to everyone. Your final good deed was taking the bullets for Rabbi Mendel Goldstein to save his life."

In comments to The San Diego Union-Tribune, Lev also described Kaye as a "people person" always quick to do good deeds. "God picked her to die to send a message because she's such an incredible person," the paper reported Lev said. "He took her for a higher purpose to send this message to fight anti-Semitism."

On Facebook, Jacobs said Kaye would have wanted folks to stand up against the hate that led to her death. "Lori would have wanted all of us to stand up to hate," she wrote in her Facebook tribute. "She was a warrior of love and she will be missed. May Lori’s memory be a blessing. Please to honor Lori, do an act of kindness today with her in mind." According to Jacobs, Kaye leaves behind a husband and daughter.