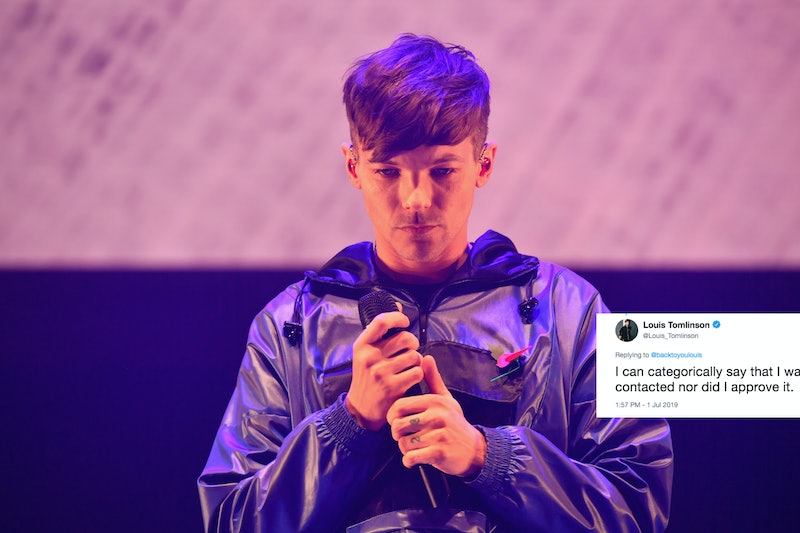 The HBO show, Euphoria, has only aired three episodes and it's already starting controversial conversations. June 30's episode titled "You Made Me Look," told the story of how high schooler Kat Hernandez (Barbie Ferreira) became famous online after writing viral fanfic about One Direction's Louis Tomlinson and Harry Styles. After the episode aired it made waves, specifically because of the animation of a backstage NSFW fan fiction, and on Monday, July 1, Louis Tomlinson reacted to Euphoria's shocking fan fiction on Twitter, saying he did not know about it, nor did he consent to having his name or likeness used in any way.

Responding to a fan who tweeted to Tomlinson about the graphic vignette, the singer and former One Direction member said, "I can categorically say that I was not contacted nor did I approve it." Styles, meanwhile, has remained silent on the matter, and Bustle reached out to HBO for comment on Tomlinson's tweet, but had not heard back at time of publication.

This isn't the first time Tomlinson has spoken out against the fictional ship. In a 2017 interview with the UK's The Sun, Tomlinson called fanfic promoting "Larry" a "conspiracy." He said, "When it first came around I was with Eleanor, and it actually felt a little bit disrespectful to Eleanor, who is my girlfriend now." So, it stands to reason why he wouldn't feel comfortable with having these "Larry" fanfictions being brought to a major television show.

The scene in question is narrated by Zendaya's character Rue Bennett, who recalls Kat's Tumblr fan fiction post that imagined Styles and Tomlinson hooking up backstage during One Direction’s 2013 "Take Me Home" tour to calm Tomlinson's nerves. "What if someone sees?" The fictional Tomlinson asked. "Let them," the fictional Styles responded. An animated Kat then appeared, dreaming of Louis and Harry as celestial beings involved in a pretty graphic sexual act.

Fans were quick to defend Tomlinson and Styles on Twitter after the episode aired. Some fans wished that the singers would have been made aware of their images and names were going to be used on the show, which, as noted above, wasn't the case for Tomlinson. Bustle reached out to Styles' rep for comment, but had not heard back at the time of publication.

The episode also upset some Tumblr users, who claimed that the account shown on the show — thunder-kit-kat.tumblr.com — was running as an active account and interacting with other users, while possibly being run by the show itself. (Bustle reached out to HBO to confirm whether or not the account was run by them, but did not hear back in time for publication. As of Monday afternoon, the page had been removed. However, according to reports from Popsugar, the account was "run" by a user that identified as having the same name, Kat, and age, 16, as the character on the show.)

Regardless of whether or not the Tumblr was actually being used by Euphoria creatives, the fan fiction storyline has clearly rubbed fans of many different communities the wrong way. And they've definitely lost at least one potential viewer in Tomlinson.

More like this
'RHOSLC' Star Jen Shah Refuses To Do A Post-Sentencing Interview With Andy Cohen
By Brad Witter and Jake Viswanath
'Friends' Star Maggie Wheeler Offers Support To Matthew Perry After Reading His Memoir
By Alyssa Lapid
Anne Hathaway Shared A "Thrilling" 'Princess Diaries 3' Update
By Darshita Goyal
'GoT' Star Emilia Clarke Says She "Just Can't" Watch 'House Of The Dragon'
By Brad Witter
Get Even More From Bustle — Sign Up For The Newsletter
From hair trends to relationship advice, our daily newsletter has everything you need to sound like a person who’s on TikTok, even if you aren’t.