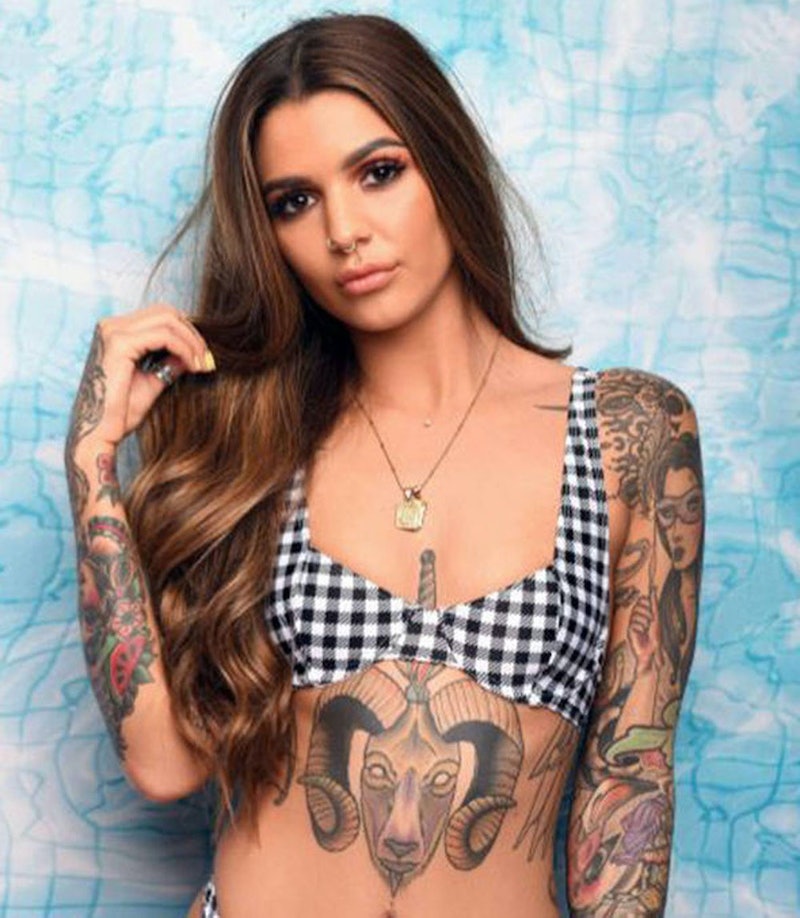 If you've been tuning into Love Island recently, you'll have probably noticed Darylle Sargeant. She's the newbie covered in many, many tattoos. But out of her extensive work of body art, there's just one inking that's really got people talking — the huge ram skull on her torso. Now, if, like me, you're into your horror, you may recognise this symbol and what it stands for, which comes to my next question: is Love Island's Darylle tattoo satanic?

When Darylle rocked up to the vila for the first time last week showcasing the inking, the first thought I had was, "I recognise that symbol". Have you ever seen Ringworm's album cover for The Promise? In case you're not a huge fan of metal, let me fill you in. It's basically a drawing of a winged hermaphrodite with three horns and a pentagram on its face. It's not the same as Darylle's tattoo, no, but there are definitely similarities. Another thought that sprang to mind was the 2015 horror film The Witch. If you haven't seen that either, the movie features an iconic scene involving a ram, which was described by the LA Times as "the most powerfully eerie animal in recent movie memory."

Why did the band and the movie producers both use this particular animal in these instances? It's because it's viewed as satanic — the false god Baphomet to be precise. "It is recognised worldwide as a symbol of Satanism, much like the adoption of the Roman Cross became a Symbol of Christianity after 400ad," satanist Venus Satanas explained her blog Spiritual Satanist.

But how do you tell the difference between your standard goat tattoo and a design of Baphomet? I mean, Darylle's inking does look very much like a typical ram, doesn't it? Well, actually no.

Look closely and you'll notice that not only is this a ram's skull rather than an alive and well animal, but between its two horns is what appears to be a third. I don't know about you, but I've never seen a three-horned goat. Not unless we're talking about Baphomet that is.

In satanism, the third horn isn't a horn at all. It's actually a torch. According to the BBC, it's known as the "torch of knowledge" and satanists put a high value on "the pursuit of knowledge." French occultist Eliphas Levi is reported by the site as saying: "The flame of intelligence shining between his horns is the magic light of the universal balance, the image of the soul elevated above matter, as the flame, whilst being tied to matter, shines above it."

But is the third horn on Darylle's tattoo definitely a torch? I mean, is this definitely a tattoo of Baphomet? To get an expert opinion, I've been speaking to satanist and blogger Lilac Spawn to get her thoughts on Darylle's inking. She tells me: "It is fair to claim this design as a satanic symbol. There are many versions of Baphomet, the Goat of Mendes. It does indeed look like a Baphomet." She continued:

"Baphomet has been used on heavy metal album covers, occult books, and religious propaganda. Even used in tarot card decks and labeled as the devil. But there have been many, many misconceptions of what is Baphomet. Baphomet was an idol worshiped by Knights Templar during the 13th and 14th centuries, 'allegedly'. In reality, Baphomet emerged in the 1850s. But that’s just a small introduction of the origins. Skip forward to the 1960s, Anton LeVay, the creator of the Church of Satan, adopted the image as the insignia, calling it the 'Sigil Of Baphomet'. Often misinterpreted as the devil, when he isn’t. In Satanism, Baphomet isn’t an external deity to worship, but a symbol of worshiping one's self."

While I don't know if Darylle is a Satanist, as a member of the Church of Satan, Lilac admits that it can be incredibly frustrating when people get satanic imagery tattooed onto their bodies without doing their research first. "I try not to get really annoyed because for many years, there has been different meanings behind the symbol of Baphomet," she explains. "It can be very annoying because a lot of paranoid people see Baphomet as evil, and connected to the devil, when that’s completely wrong."

Some while back Lilac reveals that a girl tweeted her a picture revealing a Baphomet tattoo on her back. Her followers then asked if she knew she meaning of the imagery and it turns out, she didn't. "I’m thinking to myself, why have that tattooed if she doesn’t even know of Baphomet," she adds. "She had all these wrong ideas of who Baphomet was. She just got it because it looked cool.

"Baphomet has been used in fashion, just for profit. It’s one thing to wear it if you’re part of the culture, but if you don’t practice Satanism, and you're just a poser who just sees a goat humanoid, what’s the point of wearing it? It becomes meaningless. It’s very annoying."

It is possible that 24-year-old Darylle is aware of her tattoo's connection to satanism. If she does, it'll be interesting to hear her story once she leaves the villa, which probably isn't that too far into the future if she sticks with Adam (shout out to Kendall, Rosie, and Zara).

Love Island is on ITV, Sunday to Friday at 9 p.m.