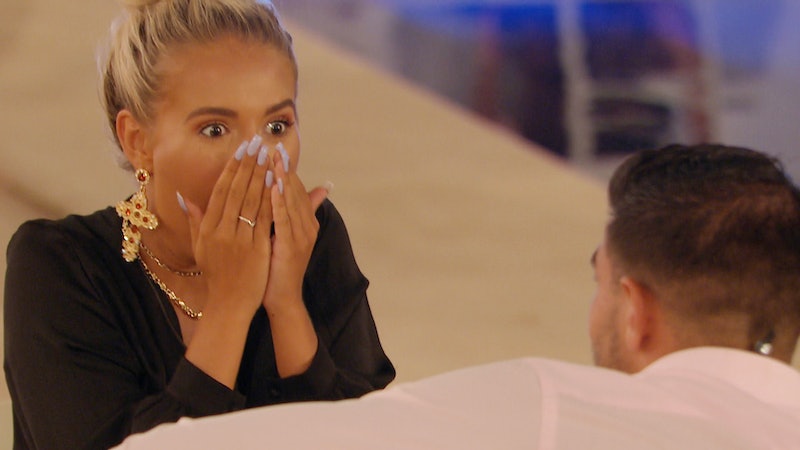 By now, most of us are aware that the "reality" in "reality TV" should be taken with a generous fistful of salt — which doesn't make it any less fascinating when the insiders pull back the curtain. Today's edition: Love Island's Molly-Mae Hague revealed that one of the biggest scandals of the latest season unfolded with more than a little help from the producers. Specifically, they prodded her to spill the beans about Anton Danyluk giving his phone number to a shop assistant, which caused something of a stir among the other contestants.

Let's recap what viewers saw. Anton, Jordan Hames, and Tommy Fury ventured out of the villa to do a little food shopping, and Anton slipped his number to an assistant behind the till as they headed out of the shop. Later, Tommy relayed the news to Molly-Mae, swearing her to secrecy, but she passed it on to Anna Vakili, and word eventually spread to Anton's partner, Belle Hassan — who wasn't actually all that bothered, it turned out. Still, Molly-Mae came under fire on social media for letting word get out after promising Tommy she'd keep it under wraps. But speaking to Closer, she revealed she didn't actually have a choice in the matter, since the Love Island producers were calling the shots.

"Tommy [Fury] told me a little secret about Anton giving his number out to a shop assistant," she told the magazine, adding, "And when he told me that, one of the producers came up to me and said, 'You need to tell Anna [Vakili] about that, make sure you tell Anna that that happened.'" Molly-Mae was reluctant after telling Tommy she'd keep the news to herself, but the producer reassured her: "She said, 'Don’t worry, we won’t show that bit.'" A pledge the producer didn't quite stick to, as viewers will recall.

"So I told Anna, and I know I got a lot of backlash for being unfaithful to Tommy, but sometimes you have to do things in there that you don’t necessarily want to do, but for the storyline it just makes it work," Molly-Mae said. "Sometimes things like that happen, and it just wasn’t me. So sometimes I wish I’d stuck up for myself a bit more and said, 'Actually no, I’m not going to do that.'" Bustle has reached out to ITV for comment.

Molly-Mae recently spoke to OK! about the social media hate she's faced since leaving the villa, telling the magazine, "I’ve taken the support that ITV provided and it’s helped. People keep sending messages like: 'Pray for Molly-Mae, I hope she’s okay,' but I’m literally sat here loving my life. I’m so happy, nothing can burst my bubble; what the public think is irrelevant."

Which doesn't mean the trolling didn't sting: "To be called fake and all these horrible names like 'Money-Mae' when I haven’t actually done anything wrong was a shock. It is hard to hear," she said. "Some of the stuff that’s been said about me is pretty vile. There are death threats, which really isn’t nice."

The Love Island alum also addressed Anton's comments about Molly-Mae since leaving the villa (he told the Scottish Sun that he unfollowed her on Instagram because the pair "never got on.") "Everyone has seen that I’ve been getting quite a lot of backlash and hate online, so for him to then add fuel to the fire was quite shocking," Molly-Mae said. "I know Tommy would never do that to [Anton’s girlfriend] Belle [Hassan] if she was in this situation, because he’s not that type of person."

"I think it showed more about him than anyone else. It’s a shame that this has happened. It was unnecessary," Molly-Mae said. "I want to be able to support everyone who was on the show. We all did this together."