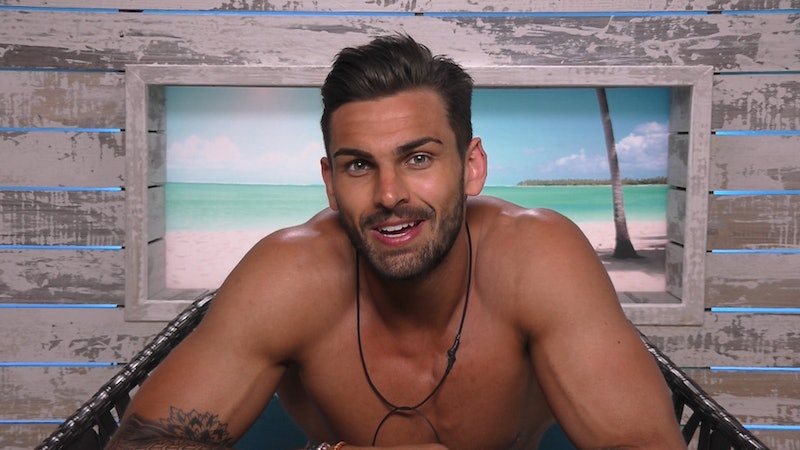 What I love the most about Love Island is that it puts straight dating culture under the microscope. You might dismiss it as trashy, shallow, brain-numbing, but I maintain that there's a lot to be learned from the goings on in that Majorcan villa. The latest lesson? Love Island has a toxic masculinity problem and its name is Adam.

Viewers at home have been watching the Geordie personal trainer with interest over the past week. As this season's first bombshell contestant, he was tasked with splitting up one of the existing couples by partnering up with the girl he liked the most. He picked Kendall. At first things seemed to be going ok, bar Kendall's upset over hurting Niall. But it wasn't long before his behaviour was being called out on social media. Kendall had told Adam that she wanted to take it slow, and instead of listening to her reasonable requests, he pressured her into moving faster, making it seem as if she owed him something for choosing her.

In came new arrival Rosie, who made her interest in Adam clear, which is fair enough, as islanders are often heard saying it's Love Island not Friend Island, after all. What wasn't fair, however, was how Adam used Rosie's obvious attraction to him to pile the pressure on Kendall. When she wouldn't kiss him the night the new girls arrived because she didn't want it to come across like she was just kissing him for the sake of it, he called her an "over-thinker." Then when, after being made aware of Adam and Rosie's attraction for one another, she (correctly) predicted he would pick Rosie over her in the recoupling, he branded her insecure (for about the fifth time), and somehow made her apologise to him. Baffled? Same.

But while most of the fuss on social media over Adam's treatment of Kendall started once Rosie had entered the house, his toxic masculinity was on display for all to see much earlier than that. After he picked Kendall, they were sent on a date in which Adam asked her if she would be up for a spoon in the bed they'd now be sharing. When Kendall said she wasn't ready to spoon on the first night, Adam said: "How about if you give me a kiss now, then we don't have to spoon when we get back?"

How manipulative can you get? So a woman tells you she doesn't want to spoon you and your response is to say that's only acceptable if she trades it for another kind of affection? What about just respecting her wishes and boundaries?

Pressuring a woman into giving you affection is likely to make her think that you're only interested in her body. Why? Because you're telling her, I'm not interested in you unless you are intimate with me. If you're only after a casual relationship then that's fine, but that has to be made clear and both partners have to agree. But just as it's not called Friend Island, it's also not called Casual Relationship Island, is it Adam? I also think it's worth remembering that at this point they'd been in the villa just a few days. She hardly knew him, yet he went out of his way to make her feel as though he had a right to her affection.

Given the way Adam disregarded Kendall's wishes to take things slow over the spooning situation, is it any surprise that when someone who was attracted to Adam, who seemed to be up for taking things a bit faster came into the villa, Kendall felt insecure?

Adam went on to prove Kendall and all the Twitter critics right when he decided to break things off with her. It wasn't the break up that I had a problem with, more the fact that less than 30 seconds later he was kissing Rosie when Kendall was a few feet away. That's exactly the kind of behaviour that's likely to make someone insecure, and showed that Kendall's concerns were right after all — he didn't care about her emotions.

Then when she turned around and said to him that seeing him with Rosie had made her feel jealous and she wanted to let him know that she'd be up for partnerning up with him in Friday's recoupling, Adam was over the moon. He told Kendall, "it's probably bad that I prefer you jealous". And I think I know why. When Kendall wanted to take things slow, she was focusing on her and her wishes and boundaries, but when she was jealous, she was focusing on Adam. If someone isn't happy unless you're giving them your undivided attention, that's a bad sign. Not only because they're disrespecting your autonomy but also because that act of disrespecting your autonomy says that theirs is far more important.

During one of his many complaints about Kendall's insecurities, Adam admitted to one of the other lads on the island that all of his girlfriends have been insecure, and he's fed up of it. Well, as someone quite rightly pointed out on Twitter, the common denominator in all of those relationships is Adam, and if he wants some ideas for how he can go about changing his insecurity-inducing ways, I've got a long list.