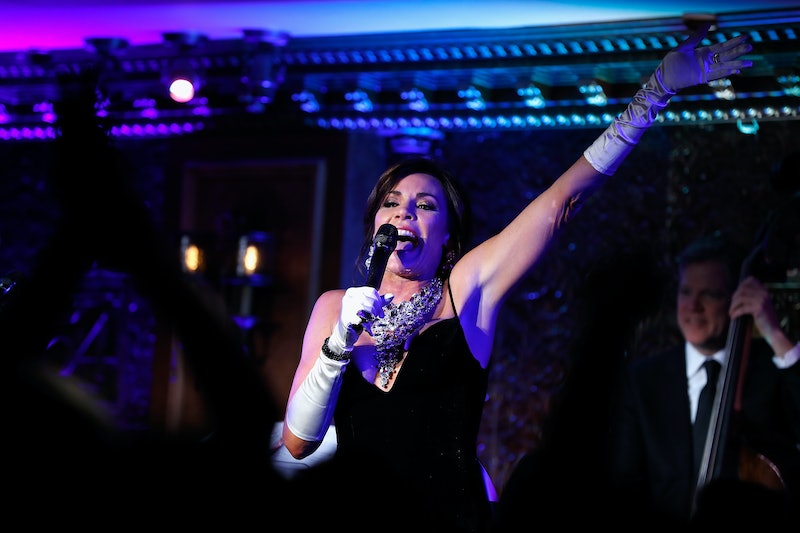 The Real Housewives of New York City's resident Queen — nay, Countess — of Pop has another smash hit on the horizon. Luann de Lesseps teased her next song "Viva La Diva" in a new interview published on Thursday, April 23. And surprisingly enough, it comes from a songwriter whose worked with legendary artists like Bon Jovi, Cher, and Hilary Duff.

The OG New York Housewife recently teased that fans will eat up her next track and revealed who she was creating it with. "I'm working on a new song with Desmond Child who wrote 'Livin' La Vida Loca' and 'Living on a Prayer,'" she told Entertainment Tonight. "The new song is called 'Viva La Diva,' which will be out this summer. It's so good! You're gonna love it." Between them, the unexpected duo have created those previously named classics plus undeniable anthems like "Chic C'est La Vie." With these two coming together, "Viva La Diva" is sure to be sensational.

"Viva La Diva" will mark Countess Luann's fifth single since starting her music career back in 2010 with the iconic "Money Can't Buy You Class." Since then, she's been thrilling Bravoholics and naysayers alike with tongue-in-cheek hits like "Girl Code" and "Feelin' Jovani," both of which were inspired by some of the Countess' most hilarious moments on RHONY (cue Dorinda shouting "Jovani" at Luann's first cabaret show).

"Viva La Diva" was initially supposed to come out in January, as she told PEOPLE back in December 2019, but due to unknown reasons, and then the ongoing COVID-19 pandemic, it has been delayed to this summer. But some lucky fans have already heard the track: her fellow Housewives of New York. “I played it for the girls when we were in Mexico and they loved it,” she told the outlet. “It’s so fun!”

She plans to perform the song at her new cabaret show Marry, F*ck, Kill, the launch of which has also been delayed due to the pandemic. But she assured that fans will see her creating both the song and show during the new season of RHONY while waiting. "My tour, like everybody's tour, is postponed," she told ET. "I'm excited to get back on the road when I can. I'm working on new dates and I'm excited. You'll see that kind of play out on the show as well."

With a title like "Viva La Diva," it's sure to live up to LuAnn's small yet mighty catalog of over-the-top anthems, and fit nicely within the top ranks of Real Housewives songs.