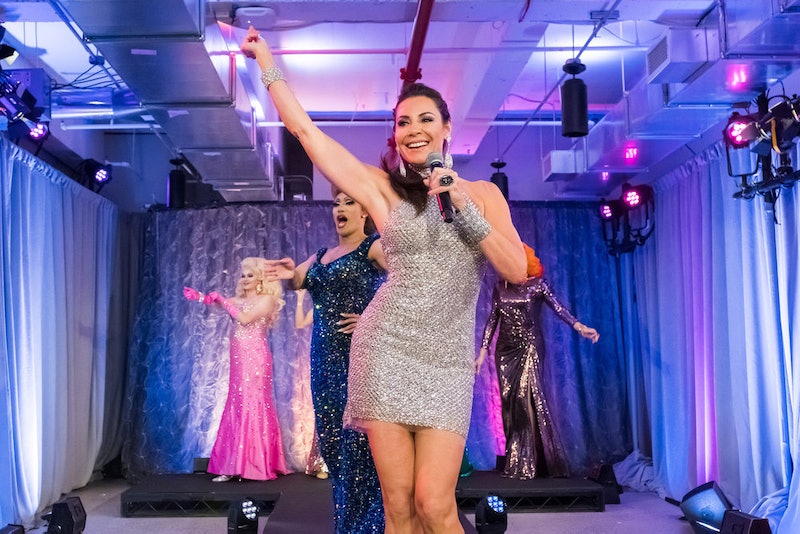 Luann de Lesseps received a lot of flack for her cabaret this season on Real Housewives of New York City. Of course, it came up again during the reunion, along with her "friend" Barbara Kavovit's comments about how Luann "can't sing." She shut that down with a big reveal: Luann will star in Chicago on Broadway.

Update: On July 29, Page Six reported that Luann would not be starring in Chicago.

Andy Cohen played back the clip of Barbara in the audience at Lu's show from the Season 11 finale episode. Barbara told her friend, "I don't think she could ever really hold a show by herself. I mean, she can't really sing." Ouch. Clearly, the two of them didn't get past it by that point. That's when Luann declared, "Here she is again at my cabaret show, talking about me and how I can't sing. I want to tell you all right now, that for someone who can't sing, I just got cast in Chicago on Broadway. So, you know, take that and shove it up your ass. How's that?"

Wow. Impressive. That's what it is. And Luann is actually not the first Real Housewife to be a part of Chicago. Bravo's Daily Dish confirmed that Real Housewives of Atlanta cast members NeNe Leakes and Kandi Burruss have appeared in the musical along with Real Housewives of Beverly Hills star Lisa Rinna. The "Money Can't Buy You Class" singer is in good company!

So when is this happening? A Chicago production representative shared with Broadway World: "Luann de Lesseps is not confirmed to join the cast of Chicago at this time." However, that doesn't mean that she won't be a part of Chicago eventually.

Luann opened up about the details during a July 20 interview with People. She explained, "You know what, there has been talk of me in Chicago and my tour has been going on, so we are trying to work out a date." Yes, once again, life comes back to the cabaret. Despite the jokes from her co-stars, Lu's show is actually doing very well and she keeps adding dates to her tour.

When she was asked if this was really happening, Luann clarified, "Yeah. We just have to work out a date. God knows I love to be on stage, so that's good." Luann didn't give too much away and she didn't even say what role she would play, but she did tease, "It's a part that's fitting for me because it's all about class."

The People interviewer joked with Luann, "The ladies can't give you any grief now." However, Luann is a seasoned Housewife and she knows that sometimes the group's mentality defies all logic.

She responded, "I don't know about that." Then she laughed and predicted that her co-stars would start to comment "Don't say 'Broadway.'" Ironically enough, Season 11 was the perfect PR for Lu's cabaret show. The ladies supported her show. They joked about they show. And some (cough cough Ramona Singer) even complained about her show. Nevertheless, it was a constant topic of conversation. And all publicity is good publicity, right? Maybe her role in Chicago will take over the storylines during Season 12.