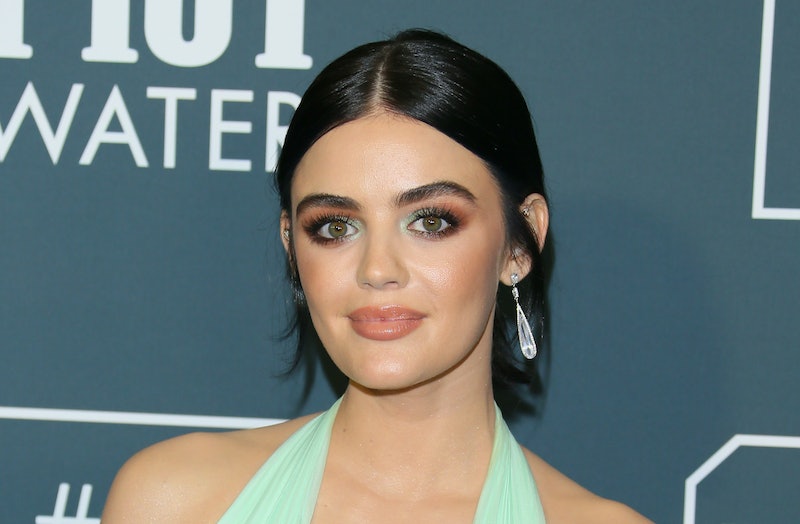 There are a lot of perks to starring on a massively successful TV show, but having millions of eyes on your every move is definitely not one of them. In a recent interview with Cosmopolitan, Lucy Hale revealed that starring on Pretty Little Liars affected her body image, as all of the fans watching at home could see every single change that happened to her over the years. When the series premiered in 2010, Hale's character, Aria, was a sophomore in high school, while the actor was entering her twenties. By the time it ended, Hale was almost 30.

"You did feel like you had to uphold some sort of image [the whole time]", Hale told the magazine. While she noted that she's "always been very petite," her body changed throughout her 20s — she is human, after all — which didn't exactly line up with her very young character. "I gained a little bit of weight, and seeing how people reacted to that really messed with my head," Hale explained.

As the show got more popular, and Hale became more and more famous, the stress of trying to maintain that perfect image began showing on her skin. "I started getting all these stress-related, hormone-related breakouts," she recalled, adding that when her skin was particularly bad, the creative team used a "specialty light for me" while filming.

Ultimately, Hale explained that she was able to take back control of her image by deciding to cut about eight inches of hair off in November of 2014, during a hiatus from Pretty Little Liars. "It was the most liberating thing I’ve ever done," she told Cosmopolitan. But now she regrets letting the fan reaction take such a massive toll on her. "I look back and I think of all the minutes and hours I’ve wasted upset over how I looked or something that was out of my control," she said.

Hale isn't the only member of the Pretty Little Liars cast who felt that starring on the hit drama affected their relationships with their bodies. In 2017, Sasha Pieterse revealed that she was diagnosed with Polycystic Ovarian Syndome and had gained 70 pounds as a result. "It was really, really hurtful the way people reacted," the actor revealed on Dancing With the Stars. "People were saying stuff like, 'she's pregnant, you're fat.' They were angry, they were mad that I look like this."

A year later, in a PSA for video for ABC and Disney's #ChooseKindness campaign, the actor explained that all of that negative attention made it much harder to deal with the changes in her body. "I didn't know that's what was happening to me, so during that time when I was trying to figure it out on my own ... it was documented every week," Pieterse recalled.

As a result of their experiences, the cast of Pretty Little Liars have attempted to make things easier for fans of theirs who might be going through the same thing. In 2014, Ashley Benson slammed a promotional poster for the show for using "way too much photoshop," and added that "no one looks like this." Around the same time, Troian Bellisario — who has been open about her past experiences with anorexia — shared un-retouched photos from a GQ shoot on Instagram, writing, "my hips and thighs are a part of me (even though they magically weren't in some shots!)"

While it's unfortunate that starring on Pretty Little Liars took such a toll on Hale's — and the rest of the casts's — mental health, they have used their experiences to normalize women's bodies in all shapes and forms, and ensure that their fans don't have to endure what they did.